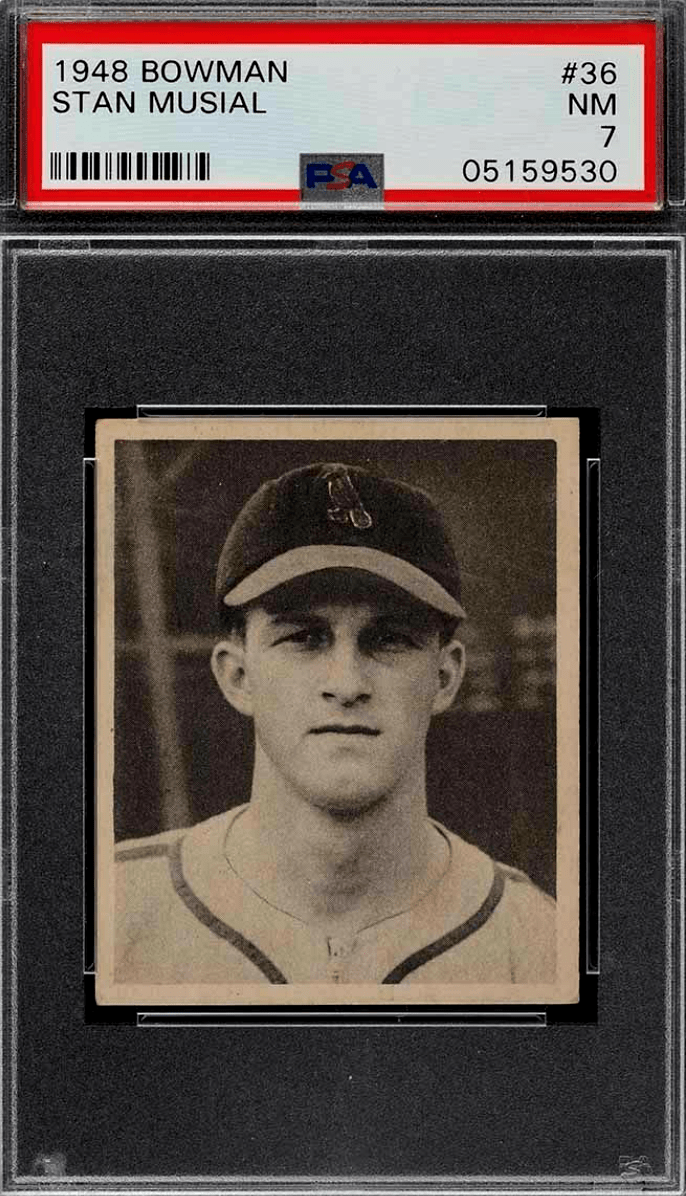 One of the greatest hitters in history, Stan Musial (1920-2013) was a first baseman who spent 22 seasons playing for the St. Louis Cardinals.

A 24-time All-Star and a winner of three World Series rings throughout the 1940s, Musial held or shared 17 MLB records, 29 NL records, and nine All-Star Game records by the time he retired in 1963.

Here’s everything you could possibly need to know about three top Stan Musial baseball cards, including investment advice if you’re tempted to pick up a copy yourself.

We’ve considered pricing, popularity, and rarity when coming up with this list of three of the best Musial cards.

Post-war options feature heavily, with a couple of RCs that couldn’t be left out. He wasn’t featured in the first six Topps baseball card sets, which complicates things ever so slightly. 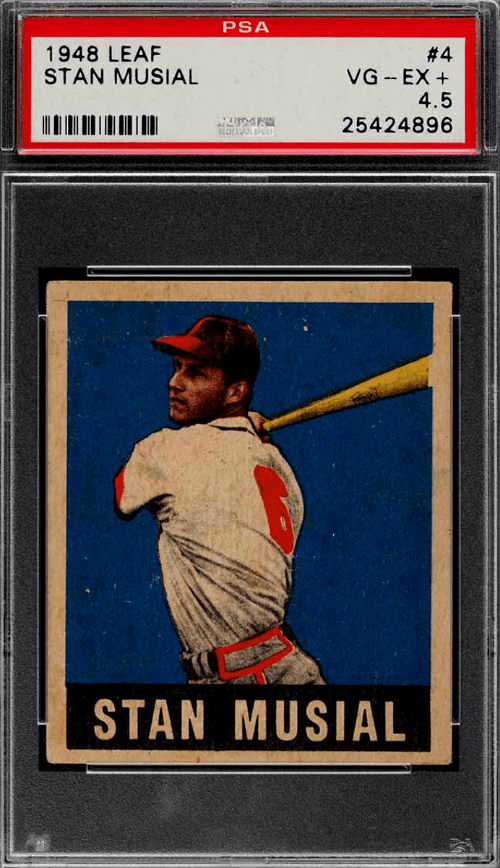 When looking at Musial’s earliest cards, either Bowman or Leaf are the preferred brands. This 1948 Leaf might not be a short print like some of the others from the set, but it’s still a great card, and it’s incredibly valuable when looking at copies in better condition.

|Must Read: Gold Card Auctions Hot 10 (Must Own Rookie Cards)

A colored card that comes with a deep blue background at higher PSA grades, it features his name in large letters at the base. As an RC, it’s sought-after, and it’s a great investment option. You’ll have to watch for the print lines, which often hold it back from achieving higher grades.

Another post-war option seen as one of Musial’s RCs, the 1948 Bowman is a simple black-and-white card that features a large profile shot of the Cardinals legend. The majority of cards see Musial smiling, so it’s strange to see him holding a straight face in the photo.

The reverse features a ton of player info, in the black text against a white background. In terms of prestige, it’s slightly more popular than the Leaf card, but the colored option above is our personal preference of the two. 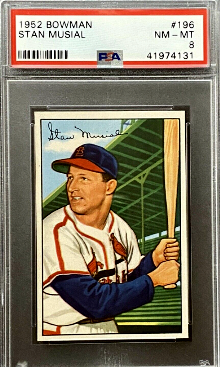 One of the more underrated baseball cards from the early 1950s as the 52 Bowman set is a thing of beauty. We had a tough time placing this 3rd on the list. 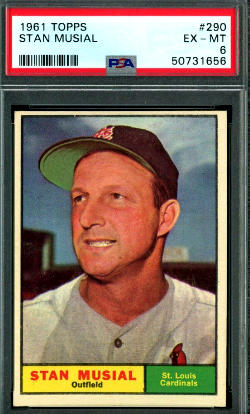 A popular option with budget collectors and widely available. A great Stan the Man baseball card for those who are not looking to pay through the nose. 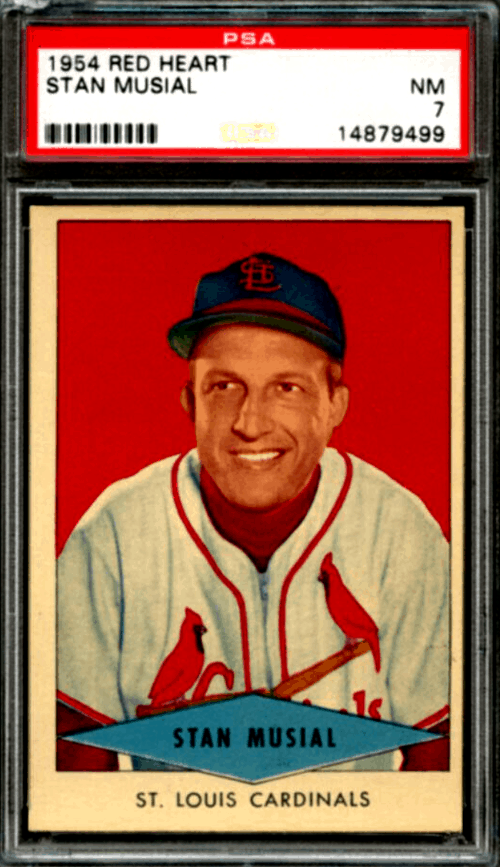 Last, but by no means least, is the 1954 Red Heart. The set was issued regionally with Red Heart brand dog food, and it consists of 33 unnumbered cards. It features a great colored image of Musial in a profile shot, and you can see the advances in technology over the past decade.

|Education: How Much Should You Invest In Baseball Cards

They came in three colors, with Red being the last series. Musial’s card is found in this set, which is the most difficult to find overall. The reverse is similar to a modern-day card with lots of stats and a mini paragraph, along with a large advert for “The big league dog food” brand.

The value of Stan Musial baseball cards should steadily climb throughout the coming years with no major fluctuations up or down on the horizon.

If you would like an estimated value of a Stan Musial baseball card please email us a minimum of 2 photos (front and back) to value@goldcardauctions or hit us up on the Gold Card Auctions Facebook page.

As a true legend that returned from the Navy to win his second MVP award and third World Series title, Musial will always be popular with baseball card collectors of any age.

Early options could have been worth so much more, but his first cards were made six to seven years into his career. It’s a case of what could have been, but that’s not to discount what was actually released.

Some of that can be attributed to the rising price of cards in general, and Musial’s passing in 2013 will also play a part. Still, that’s a massive 400% rise, so they’re worth keeping an eye on.

They’re also hard to find in good condition, with everything from the age to the brand factoring into the low availability.

Stan Musial baseball rookie cards are some of the stronger post-war options, and his CV holds up to almost any other player in history

Stan Man’s cards are some of the best investment pieces if you’re willing to hold, although it’s difficult to predict whether prices will continue to rise at current levels for the time being.

Either way, the trio of cards we’ve listed are great investment pieces, as well as some of the best Musial collectibles that money can buy.