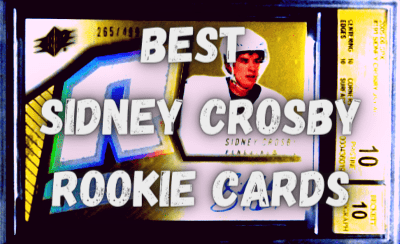 Sidney Crosby (8/7/1987) was the first overall pick in the 2005 NHL Draft. The Pittsburgh Penguins took the franchise-changing talent with the no-brainer selection.

We don’t throw the term “can’t-miss cards” around lightly. The term applies here. 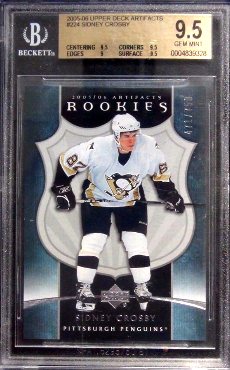 At this point, Sidney Crosby’s longevity in the NHL makes the 2005 Sidney Crosby UD Artifacts RC #224 an actual artifact. Like many artifacts, it’s valuable.

A print run of 750 doesn’t exactly make the card a rare artifact, but it’s a limited pool nonetheless.

The card is an effective showcase of Sid the Kid, who is displayed prominently in front of a silver rendition of the NHL shield. Sid is doubled over, catching his breath in the Penguins’ all-whites.

The card’s design scheme is heavy on blacks, greys, and whites, and it gives off a premium vibe. In between Sid’s skates is a silver Upper Deck logo. Beneath the skates is a nameplate denoting Crosby’s name and team (the Pittsburgh Penguins).

While the 2005 Sidney Crosby Upper Deck Black Diamond RC #193 isn’t quite as valuable as a diamond, it’s valuable for a rookie card.

It features a refractive background with a green-yellow sheen. Crosby displays an effortless skating form, leaning to the right in the white, black, and gold Penguins home unis.

The card’s design is reflective of the early-90s Upper Deck style—not too flashy, not too ritzy. The black and gold nameplate at the card’s bottom is in an inverted pyramid formation, featuring Crosby’s name, position, and the “Rookie Gems” banner.

That’s pretty much the extent of what this card offers. It’s a solid if unspectacular design, but it’s a Sid the Kid rookie card. For this reason, collectors value it highly. 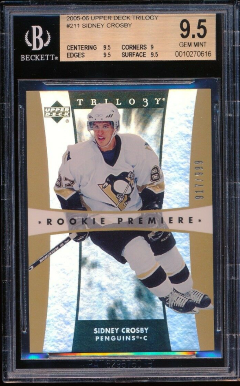 The 2005 Sid the Kid Upper Deck Trilogy RC #211 is a master class in sneaky good design.

It features the fresh-faced rookie leaned to the right so effortlessly that you’d think it was his natural state. A three-layered, crescent-shaped vertical spectrum fits perfectly with the Trilogy theme.

The outer layer is a gold border that, on the right-hand side, includes the print run indicator. The next layer is grey-white, containing the Upper Deck logo.

The innermost layer is a black-and-white, X-ray-style backdrop that bleeds into a black nameplate at the bottom and a “Trilo3y” banner atop.

Young Guns rarely have the most eye-catching design, but consistency has earned the set widespread respect among the sports card collecting hobby.

Crosby’s Young Guns rookie card is no exception to this general rule. The image of Crosby has natural appeal, as a red advertisement on the boards creates effortless contrast.

Crosby’s image is also memorable. His left leg makes a right angle as he makes a leftward rotation, head peering over his left shoulder as a tassel of hair dangles from beneath his white helmet.

The card’s lefthand side is a marble-style border that cuts across the bottom-left corner in a triangle formation.

The bottom border is a series of horizontal lines including a translucent “Rookies” banner. Above the banner reads “Sidney Crosby” and “Penguins” in varied fonts.

In terms of design, you never know what you’re gonna get from Young Guns year to year. In terms of value, Young Guns delivers consistent returns. 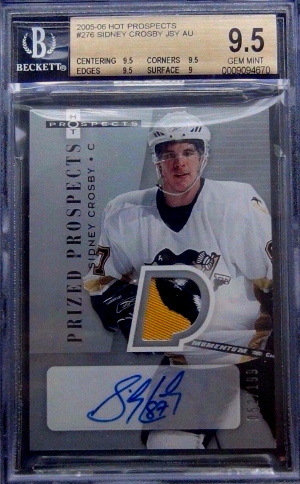 The first autographed card on our list is the 2005 Sidney Crosby Upper Deck Hot Prospects Auto RC #276…and it also includes a player patch.

Autographs and patches are always positive for a card’s value, and a print run of 199 further improves this rookie card’s prospects.

There is a lot going on here. The white player patch in the shape of a “P” is laid over an image of Crosby in a white Pittsburgh Penguins jersey.

Beneath the patch is a rounded rectangular space where Crosby’s intricate blue autograph rests. The signature is memorable, as Sid cleverly involves his jersey number, 87, into the auto.

The image of Crosby is large but unspectacular. He stands tall, mouthguard partially exposed as he looks wearily in the camera’s direction.

The card is not especially exciting, but it has the hallmarks of a solid rookie card: an autograph, player patch, and elite hockey player as the card’s focus. Even with these features considered, it’s not an overly expensive card. 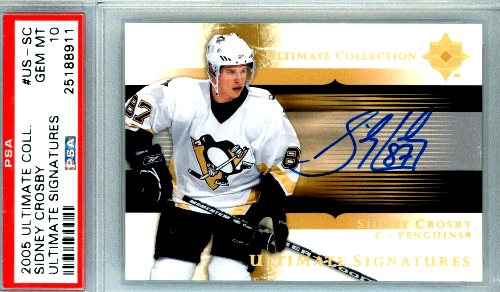 Any seasoned collector knows that where there’s a rookie autograph, there’s likely value. When the autograph is penned by Sidney Crosby, there’s definite value.

That is the case for the 2005 Sidney Crosby Upper Deck Ultimate Collection Auto RC #91. Limited to 299 copies, this card might be forgettable…if not for the autograph.

That autograph resides on the card’s lower-third. Crosby’s hieroglyphic-style signature is oriented above a subtle “Ultimate Collection” banner and a compass-like emblem.

The card’s middle third is a series of gold and black horizontal lines. Atop the lines are Sid’s nameplate and a torso-up image of the superstar in a crisp white jersey and matching Reebok helmet, eyes vigilantly affixed to his right.

The card’s top portion is a gold-white gradient that reads “Ultimate Rookies” in soft gold font.

Let’s be frank: forget the design when it comes to this Sid the Kid rookie card. It’s all about the autograph, baby. 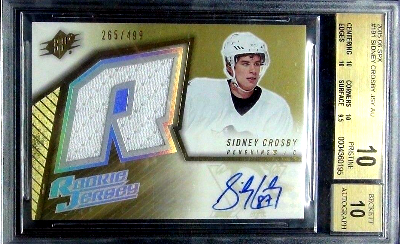 Though card design can be subjective, we think the 2005 Crosby SPx Patch Auto RC is one of the more innovative cards on this list.

Making the enlarged, “R”-shaped patch the card’s focal point is a bold, untraditional decision. The patch’s font has a high school lettermen jacket vibe, which is a nice reminder that this is a rookie card.

Crosby, who you could mistake for a high schooler, occupies only about a quarter of the card. A white helmet covers his head as he looks straight ahead, mouth slightly open.

A black and gold SP Authentic logo is in the upper-left corner while a bold “Rookie Jersey” banner is in the bottom-left. To the right of the banner is an undersized Crosby autograph.

All in all, it’s a nice card that commands strong prices. 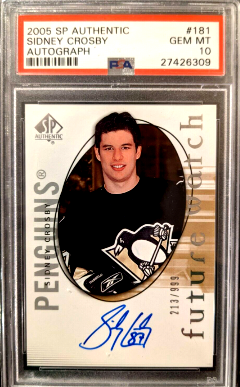 SP Authentic and Upper Deck seemed to monopolize the market on Sidney Crosby autographed rookie cards. Therefore, they dominate the top ranks in this list.

The 2005 Crosby Future Watch RC #181 is the rare card featuring Crosby with his helmet off. He grins at the camera in his black, crewneck-style Penguins uniform.

His image is contained within an ovular backdrop. The rest of the card is a white background smattered with vertical banners and a striated gold flourish.

The Crosby autograph (per usual) is the prize feature. It sits atop the white background on the card’s bottom portion. It’s clear Crosby has been practicing this autograph long before he hit the pros.

You don’t have to be a fan of the design here. Again, it’s all about the auto. 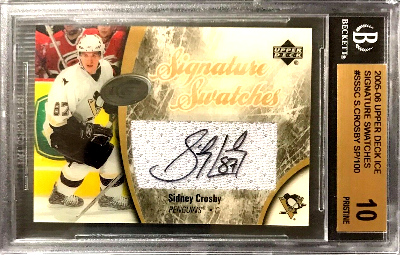 Upper Deck and Sidney Crosby rookie cards may as well be the new peanut butter and jelly. This 2005 UD Crosby Ice RC #106 is arguably the best-looking Crosby RC on the market.

It features a unique eye-like design, with Crosby’s image placed like a vertical retina. The series of gold and white circles keep the eye moving, an indicator of a well-conceived card design.

The image of Crosby is one of the better photographs among his rookie cards. He skates to his right, stick to the ice as his neck remains erect in an observational stance.

Despite lacking an autograph, this card has garnered consistent interest. With an elite design, it’s clear to see why collectors love this one. 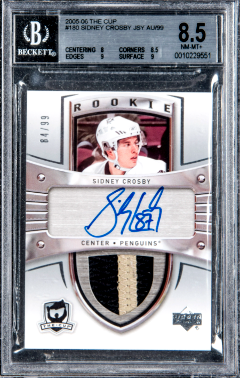 The Cup from Upper Deck has become a set that contends as one of the best year-in and year-out. When you throw in the auto, the patch, and the Crosby, this is a worthy occupant for this list’s top spot.

Embracing the medieval warrior vibe, the card’s centerpiece is a shield-shaped graphic with a silver metallic sheen. The bottom of that graphic is a multi-colored player patch.

The top of the graphic is a headshot of Crosby. In the center of the headshot and patch is a grey autograph plate with a blue signature emblazoned.

In all honesty, there are more attractive Crosby rookie cards. However, it’s 99-card print run, the autograph, the Upper Deck name, and the patch combine for a valuable sum of the parts.

Few players from the modern era command collectors’ attention like Sidney Crosby. With Stanley Cups, Conn Smythes, Harts, and a certain Hall-of-Fame nod to his name, Crosby is as sure-fire as it gets in hockey card collecting.

With a legacy cemented, it seems that the only way for Crosby rookie cards to go (market conditions considered) is up.

Top-Shelf Cards: 10 Most Expensive Hockey Cards from the 1990s

This is no secret to collectors. Therefore, you can expect to pay a premium for the best Crosby rookie cards.

Value investors may target mid-range Crosby rookie cards for maximum growth. However, we could look back at the current prices of top-tier Crosby cards as a steal.

How many Sidney Crosby rookie cards are there?

There are more than 30 rookie cards from his rookie year which was 2015.

What is the most expensive hockey rookie card?

What is a Bobby Orr rookie card worth?

A Bobby Orr rookie card is worth a few hundred or a few hundred thousand depending on the card and grade. The 1966 Topps Bobby Orr #35 Rookie Card at a PSA 9 grade will sell for $250,000.

A Connor McDavid rookie card can be worth over $100k at a high grade. In the summer of 2020 the McDavid 2015-16 Upper Deck rookie patch autograph card sold for a final bid of $135,811. The auction took place at Lelands Spring Classic Auction