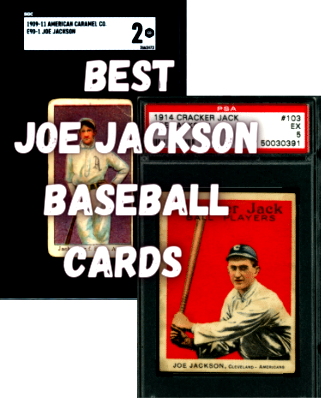 On August 12, the Chicago White Sox will take on the New York Yankees in Dyersville, Iowa, at the “Field of Dreams” movie site. Already a highly anticipated contest, the game was delayed an additional year due to the COVID-19 pandemic.

Field of Dreams, considered one of the best movies of the 1980s, centers around a father and son who clashed over a multitude of values, ideals, and topics, one of which was their opinion of Shoeless Joe Jackson.

Shoeless Joe and seven of his White Sox teammates were banned from baseball for life for intentionally losing the 1919 World Series as promised to gamblers who funded them. No one, from the entry-level baseball fan to the hard-core seam head, can deny that this was one of the most interesting things that ever happened in the sport.

By staging a game around an iconic and acclaimed film (based on the novel “Shoeless Joe” by W.P. Kinsella), Major League Baseball is inviting us to have a conversation on Jackson and his downfall. 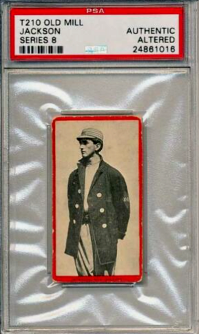 Heritage Auctions currently has this card up for sale, estimated to go for around $400,000 when the bidding concludes on August 22. As of this writing, the SGC as VG 3 graded card has a current bid of $280,000. In some ways, this is a Joe Jackson “rookie card,” as it depicts him during his final stint in the minor leagues with the New Orleans Pelicans.

This card depicts Jackson in an earlier stage of his career, while he was still shuttling back and forth between the majors and the minors. In this specific image, he looks more like a Brooklyn or Portland hipster than he does the man who would eventually hold the third-highest batting average in MLB history.

Still, it’s an extremely striking image, which dominates a card with a red-bordered design that was indicative of the issues being produced at the time. 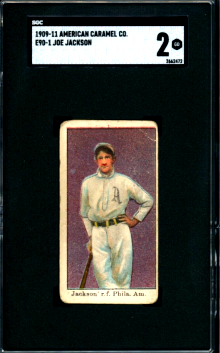 “You look at Joe Jackson. He has something of a mythic status,” said Mike Provenzale, Production Manager, and Auctioneer on the eve of the National Sports Collectors Convention. Jackson the myth is compelling, of course, but the actual man is even more so. He really didn’t even need to be fictionalized to be interesting.

There is a saying about The National, which concluded its 2021 edition in Rosemont, Illinois, just last week: “If you can’t find it there, then maybe it doesn’t even exist.”

This is one card I did see at The National, and it had a $55,000 price tag on it. PSA points out that many consider this issue to be the true Jackson rookie card, and they describe it as “clearly his most valuable.” Given that this is the player from which Babe Ruth admittedly copied his swing, this is a very special card, to say the least. 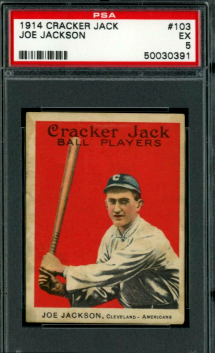 Ty Cobb once called Jackson the greatest left-fielder ever, and there is no doubt that he was one of the greatest ballplayers of all time. However, you can’t find many cards of him, because only a small handful were ever created.

There seems to be a consensus, though, that the nicest, most beautiful Shoeless Joe cards in existence are the 1914-15 Cracker Jack issues. They have an eye-catching red background to go along with top-tier artwork and stellar design.

1915 is typically the superior edition because they were also made available via redemption offers for factory sets, not just in the box itself, and thus could avoid staining.

Yes, many of these cards suffered stains from packaging, but collectors are willing to pay hundreds of thousands for them nonetheless. Did Jackson really throw the World Series?

Well, he hit .375 in it, made no errors, and had 12 hits, including the series’ only home run. However, most of the runs he drove in came during garbage time. He maintained his innocence until the end, even committing perjury to do so. The historical consensus seems to be that he knew about the fix, took the money, but still played to win.

Even if that’s completely true, it’s not exactly admirable, as he was still double-crossing those who paid him. In other words, he was having his cake and eating it too.

Many would argue that the Black Sox scandal was the most interesting thing to happen in baseball prior to Babe Ruth. The recent centennial, coinciding with the mainstreaming of sports gambling, has forced us to take another look at the legacy of Jackson and his teammates.

We spoke with some Hall of Fame guides in Cooperstown, and they confirmed the following:

-Black Sox memorabilia is some of the highest in demand and price, and it’s very rare

-A Shoeless Joe Jackson glove was once in the hall but was later removed due to authentication issues.

-Shoeless Joe has less of a presence in the museum due to problems of provenance and verification, not due to anything involving his reputation or values, ideology, etc.

With the Black Sox centennial in 2019, there was a surge in demand for Black Sox cards, especially so for Weaver and Jackson, who are seen as somewhat sympathetic figures. Expect to see an increase in popularity, and with that valuation, again. The lifetime ban means that Jackson remains out of the Hall of Fame in Cooperstown.

Right across the street from the hall’s main entrance is a baseball trinket, memorabilia, and apparel store called Shoeless Joe’s. That right there is a sense of irony which is utterly priceless.

So much has changed in the century since Shoeless Joe and his teammates suffered that Draconian death penalty, and while gamblers were being chased out back then, sports gambling is fully embraced now. It won’t be long until you can place a bet at all of the ballparks on the game you’re going to see.

It makes the whole absolutist ruling of Judge Kennesaw Mountain Landis, a very problematic man with a specific grudge, seem kind of hypocritical now, doesn’t it?