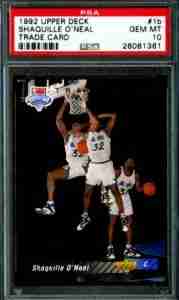 There really wasn’t much more of a sure thing than drafting Shaq coming out of LSU in 1992 as he was a beast among kids.

Shaquille O’Neal (3/6/1972) was drafted by the Orlando Magic with the 1st overall pick in the 1992 NBA draft. He also played for the Lakers, Heat, Suns, Cavaliers, and Celtics.

He played 19 years in the league and was inducted into the NBA Hall of Fame in 2016. Some may disagree but we feel Shaq was the best Center the game has ever seen and will most likely ever see as the days of a true center seem about over (unless rules are changed).

He played college ball at LSU and is also known by Shaq, Diesel, The Big Aristotle, Superman, Shaq Fu, and our favorite Shaq Daddy. Shaq quickly became a dominating force in the league averaging 23.4 points as a rookie!

Let’s check out the best Shaq Rookie Cards for your investment dollar. We feel these are some of the better rookie card investments in the game of basketball. 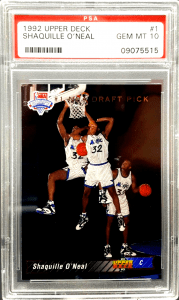 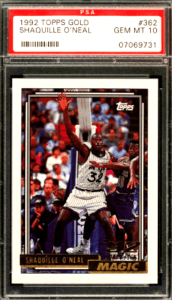 The 1992 Topps Gold is by far our favorite Shaq rookie card. The card features O’Neal in a fierce battle underneath the basket calling for the rock with a look on his face that screams what the hell?! GIVE ME THE DAMN BALL! Topps offers a base option that isn’t a bad investment but we normally bypass that and only go for the GOLD. 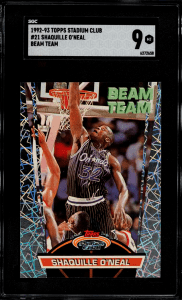 Another badass-looking Shaq Rookie Card showing him doing what he does best… being a BEAST down below. The 1992 Topps Stadium Club rookie card shows Shaq taking on gravity and rising above the rim for a rebound.

Shaq’s rookie cards are still fairly cheap when comparing him to the other greats of his generation. Most of his rookie cards can be had for well under $1000.

Please note this is not based on price or popularity but on what GoldCardAuctions.com perceives as the best ROI.

You would think his face constantly being in the public eye would help the value of his rookie cards. But honestly, Shaquille O’Neal’s rookie card values are slightly lower than we expected considering he is one of the best players the league has ever seen and the dominating force of his era.

We do expect Shaq’s rookie cards to increase in value moderately faster than other big-name players for a variety of reasons; one being the rise of the NBA as America’s number one sport and two they are starting from an undervalued position in the first place.

We don’t like Shaq rookie cards at these values… WE LOVE THEM and have been loading the truck up with them for a few years now.