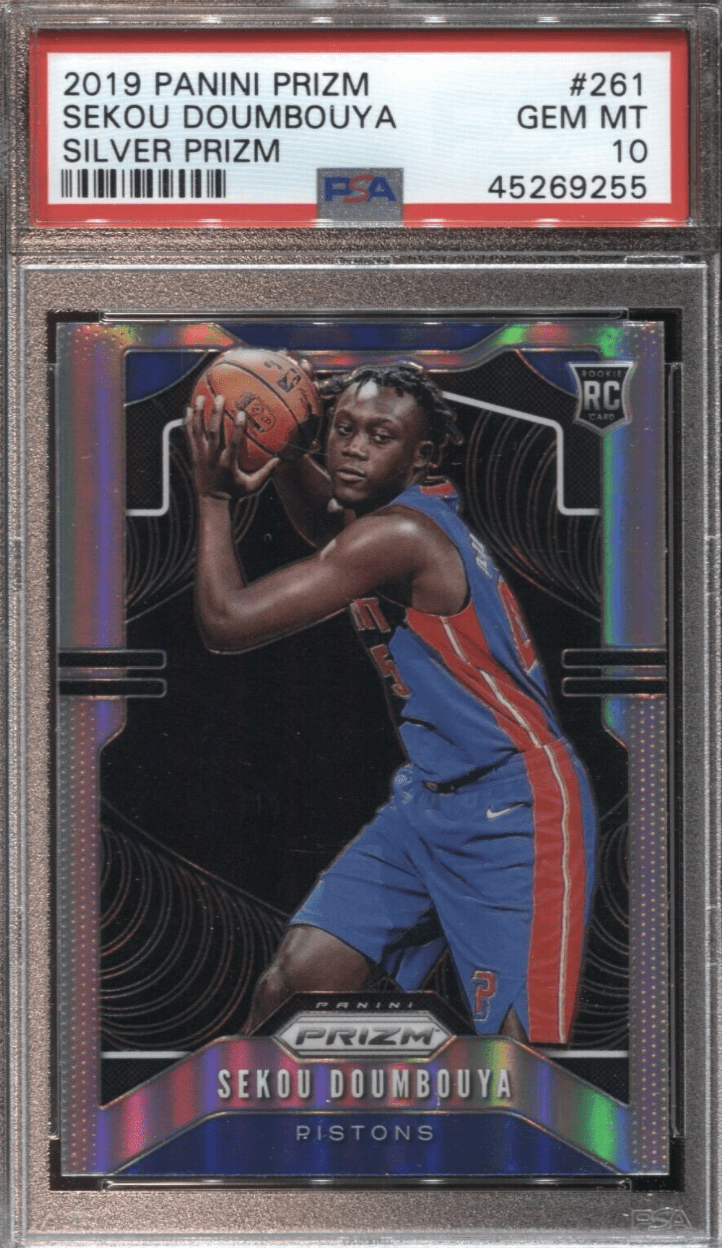 Sekou Doumbouya is slowly but surely making a name for himself as a member of the Detroit Pistons.

Doumbouya was born on 12/23/2000 in Conakry, Guinea. He and his family moved to France when he was one year old.

Doumbouya played soccer during his youth but made the switch to basketball when he turned 12 years old. The 6’8” small forward played for French teams Poitiers and Limoges CSP before declaring for the NBA Draft.

The Pistons Doumbouya the 15th overall pick of the 2019 NBA Draft. He became the first Guinea-born player to play in the NBA.

Doumbouya can shoot from the outside and drive to the basket. His versatile offensive game make him an unpredictable threat for opposing teams. 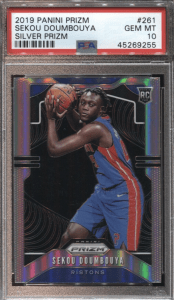 This is one of the pricier Sekou Doumbouya rookie cards. It is worth the investment? We say yes.

For one, it comes from a reputable brand (Panini). Plus, the insane graphics complement Doumbouya’s photo perfectly.

The back of card #261 reads, “The first NBA player drafted who was born in the West African Nation of Guinea, Doumbouya made his way to the Pistons as the 15th overall pick in 2019. Moving to France at a young age, the forward began playing basketball at 12 and went on to win Best Young Player honors in the French league in 2018“.

Here’s another Sekou Doumbouya rookie card worth your while.

The front of the card shows a photo of Doumbouya bringing the ball downcourt. His autograph and the background graphics mesh beautifully.

The back of card shows the card number (RS-SKD), Doumbouya’s photo, and the Detroit Pistons logo.

Try investing in this Sekou Doumbouya rookie card. It should give you a nice return after a few years’ time.

The front of the card shows a photo of a smiling Doumbouya holding a basketball. You can see his autograph scribbled between the Pistons logo and his name. If you’re a Pistons fan, you can feel the Detroit basketball vibe right off the bat.

The back of the card shows the card number (ND-SDM), the Pistons logo, and Doumbouya’s name.

The Detroit Pistons haven’t enjoyed tremendous postseason success since their last NBA title in 2004. Sekou Doumbouya could help them make strides in the next few years.

Detroit has a promising core which includes Andre Drummond and Blake Griffin. Doumbouya is a young player whose game closely resembles Luol Deng’s (another African basketball legend). If the former can continue developing his basketball skills, the Pistons will eventually climb up the standings.

Long story short, Doumbouya is a raw talent who will only get better.