Talk about Michael Jordan’s rookie cards all you want, but he would not have won as many titles as he did without his right-hand man Mr. Scottie Pippen.

Keep reading to find out which Scottie Pippen rookie cards are your best bet.

The Seatle SuperSonics drafted Scottie Pippen (9/25/1965) with the 5th overall pick in the 1987 NBA Draft. If any team would like a draft pick back, this is one of them (Atlanta Hawks are another via Luka Doncic). He was traded to the Bulls for Olden Polynice and a future draft pick option.

The rest is well-documented history as he meshed with Michael Jordan to form one of the best (if not the best) basketball dynasties of all time, winning six championships from 1991 to 1998 (only missing 94 and 95, the years in which Jordan played baseball). Scottie played 17 seasons in the league, scoring a hefty 18,940 points to go along with 7 all-star appearances and like we said, six championship rings.

Pippen was one of the league’s most underrated players throughout his career, often playing second fiddle to Jordan, but he was 100% OK with that (and that’s why we like him). It goes without saying that as we are big fans of Scottie, we have a number of his rookie cards.

Look at the best Scottie Pippen rookie cards to add to your investment portfolio. 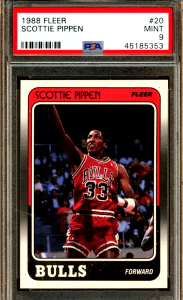 The Scottie Pippen rookie card error… Yep, one of the greatest NBA players of all time has a rookie card with an uncorrected error in the form of a name misspelling on the back of the card. Fleer spells his name Pippin on the back and never bothered to correct it.

At any rate, the card is still the number one Scottie Pippen rookie card and is a must for all Chicago Bull fanboys.

Numbered #20, the card shows Pippen (not Pippin) going up for a rebound in the classic Red Bulls Jersey.

The reverse of the card simply shows his vitals (i.e., height and weight) to go along with his 1987-88 stats. We are huge Pippen/Bulls fans and have a few of these cards in high grades. 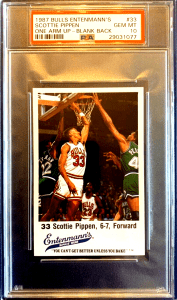 Entenmann’s are known for making some pretty damn good donuts but they also have a Scottie Pippen rookie card that is sweeter than their donuts (lame?).

The 1987 Scottie Pippen Entenmann’s rookie card is numbered #33 and shows Pippen flying through the air in an attempt to come down with the rebound.

The reverse of the card is simply blank (lame), which is a pretty big downside in our opinion… a blank backside is boring.

Even with the blank backside, we still like the card given it is created by Entenmann. If you can find it for a reasonable price on eBay auctions, we suggest buying it. 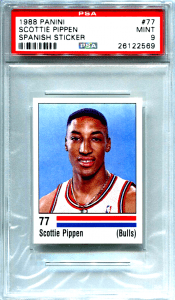 We didn’t even know Panini made basketball cards back in 1988 until we bought Pippen rookie cards a few years back.

The 1988 Scottie Pippen Panini Spanish Sticker rookie card simply shows a yearbook-style photo of Pippen. The card is numbered #77, and Scottie looks somewhat dumbfounded in the photo (like he can’t believe he made it to this point… congrats, Scottie!).

We love this card and have bought several high grades over the years. 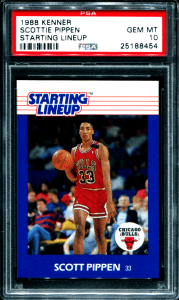 He is a rather boring-looking Scottie Pippen rookie card, and we list it just to advise you not to bother with it… who in the world is Starting Lineup anyways?

The card shows Scottie with the ball with a very unenthusiastic look on his face which matches how we feel about this card.

If you are looking to buy this card, you should be able to obtain it relatively cheaply.

This card didn’t quite make our list for the top Pippen rookie cards but is still noteworthy. 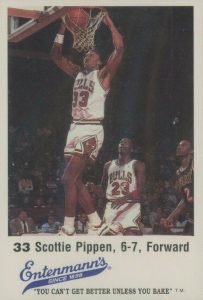 While an earlier Entemann card is listed above, this one is still a find for Pippen collectors.

It has a great photo of him dunking the ball through the hoop and has the legendary Michael Jordan in the background.

While not quite as valuable as the higher-value cards listed above, this card from the bakery is still worth a look at.

The value of Scottie Pippen’s rookie cards got a nice boost from the “Last Dance” documentary release. The cards should fall back some as the “Last Dance” boost fades but then continue to rise over the years.

If you have a Scottie Pippen rookie card and want an estimated value please email us at value@goldcardauctions.com… include a couple of photos of the card.

Here are some other Scottie Pippen basketball cards worth collecting that are not his rookie cards. 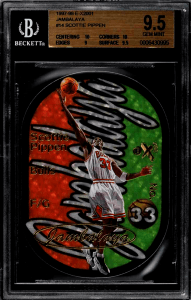 Better have some deep pockets if you want this baby as the last one sold for more than $3550 in March 2020.

The reverse of the card reads “Pippen came into the league with the reputation of a high flyer slam dunker and, as one of the NBA’s greatest 50 players he has done little to disappoint. The Bulls signature fast break frequently ends with Pippen blasting in from the wing for a one-handed slam dunk“. 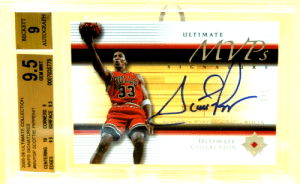 A cool-looking card is shown Pippen grabbing the ball out of mid-air with a hardwood court backdrop.

The card is numbered #MVP-SP and comes with a nice autograph adding to its value. 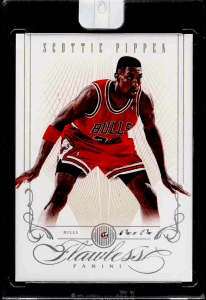 This is probably our favorite Pippen basketball card that is not a rookie card.

We are a huge fan of the Panini Flawless brand in the first place, and then you add a picture of Scottie in his classic defensive pose… ding, ding, ding… winner-winner chicken dinner!

Numbered #90 the reverse of the card reads, “NBA teams have a way of finding top-level talent in some very unlikely places. From Robert Parish at Centenary to Steve Nash at Santa Clara, the best always rise to the top. That was the case with Pippen, who hailed from Central Arkansas and took the NBA by storm, leading the Bulls to six titles“.

Scottie Pippen was one of the most underrated NBA players of all time and so are his rookie cards. The “Last Dance” documentary highlighted the fact of just how underrated he was as a player. In turn, this gave his rookie cards a much-needed price boost.

Going forward, hopefully fans and collectors will realize just how important Scottie Pippen was to the Bull dynasty.