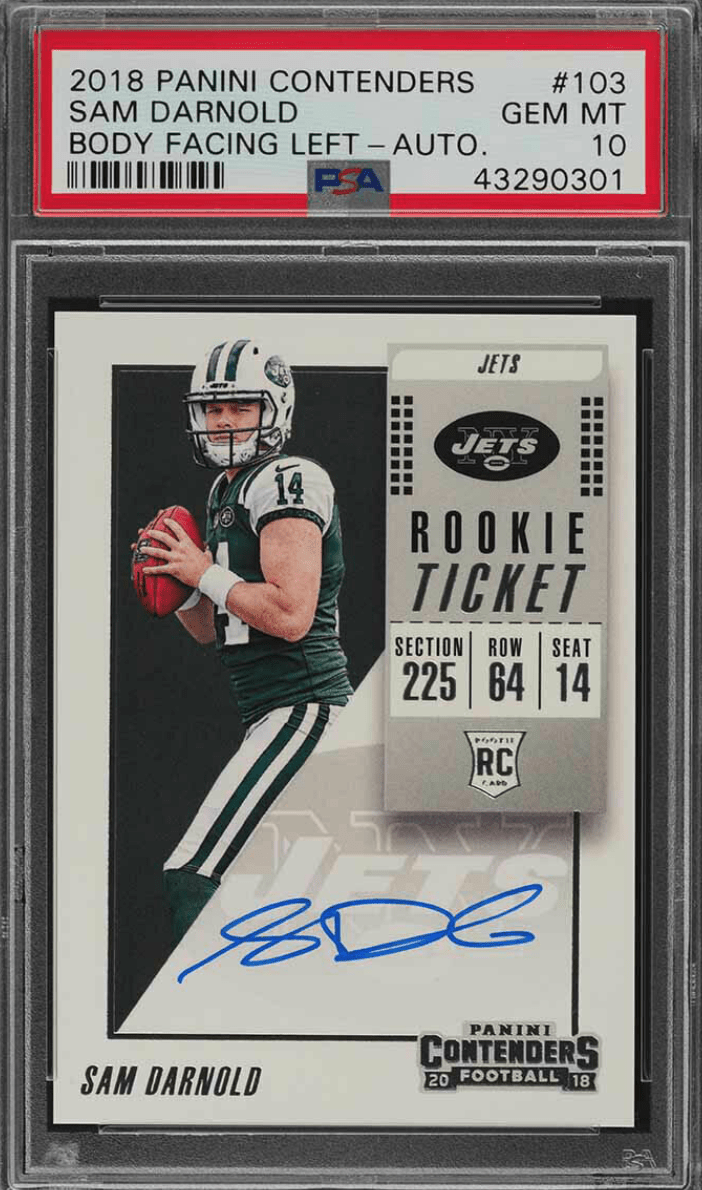 He played college ball at the Univesity of Southern California and was drafted by the New York Jets in the 1st round (3rd overall) of the 2018 NFL Draft.

This card is ideal for the casual investor who wants to get in on the Sam Darnold hype train without spending a boatload of money. 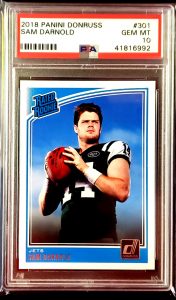 The PSA 10 or BGS 9.5 graded version of the 2018 Sam Darnold Panini Donruss Rated Rookie card should cost less than $100 (although this number will likely skyrocket quickly).

Numbered 301 and reads “First USC Quarterback selected in the first round since Mark Sanchez went no. 5 to the New York Jets in 2009“.

This card is for high rollers looking to spend a few thousand dollars on a Darnold rookie card. 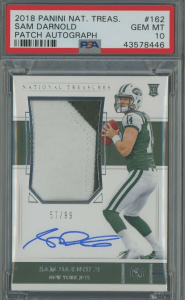 The 2018 National Treasures Sam Darnold Jets RPA RC Rookie Patch card recently sold for a little more than $3,000 (by mid-season it should be $4,000 or more).

Numbered 162 and reads “It was no surprise the Jets jump at the chance to take Darnold at no. 3 in the 2018 NFL Draft. The USC product checks all the boxes that scouts look for in a franchise quarterback boasting impressive arm strength, pinpoint accuracy, a high football IQ, and plenty of athleticism to create outside the pocket”

Another high-end Sam Darnold rookie card will cost north of $1,000.

This card is numbered 103 and is available in two versions.

The Sam Darnold 2018 Contenders Rookie Ticket Red Zone card reads “Darnold received his first taste of New York fans while attending the U.S. Open at Shinnecock, NY in 2018. One player was trying to play an iron on a par 3 and someone yelled J-E-T-S, Jets, Jets, Jets right in his backswing. He knew I was there. It was just a funny moment.”

If you’re going to spend thousands of dollars on a Sam Darnold rookie card we prefer the National Treasures over the Rookie Ticket, however.

Baker Mayfield and the Cleveland Browns are receiving a ton of hype this year but we think the Jets and Sam Darnold are the team to look out for.

They may not win the Superbowl but they should be greatly improved with Darnold going into his second year and the acquisition of Le’Veon Bell.

We feel Sam Darnold will have a breakout season and his rookie cards will see a 25% minimum ROI from the start of the season to end.

Sam Darnold Rookie Cards are set to explode in price and should be a great investment prior to the 2019 NFL season. Buy now!