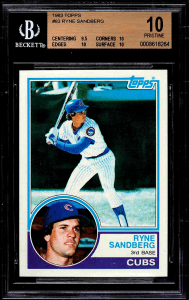 Ryne “Ryno” Sandberg (09/18/59) is a former second baseman for the Philadelphia Phillies and Chicago Cubs who played for 16 years in MLB.

One of the best second basemen in recent history, Sandberg went on to manage the Phillies, although it ended in disaster as he resigned in 2015 with the team last in the National League East Division.

We’ve identified three great Ryne Sandberg rookie cards to look out for, as well as providing descriptions and an investment report which discusses the next few years.

Sandberg’s rookie cards were released by Topps, Fleer, and Donruss in 1983. Here’s our pick of the best options, which have been chosen while factoring in recent auction sales and data to ensure popularity.

The 1983 Topps is the one to look out for, seen as his ‘true’ rookie option by many collectors.

Solid design features a couple of different pictures of Sandberg on the front of the card, with a large image of the player ready to bat, and a smaller, profile picture.

The card lists him as a 3rd base, which isn’t an error as that was the original position he was signed for with the Cubs.

The 1983 Topps is a premium option despite being reasonably plentiful, and it’s the best investment option overall.

Please note the card also comes in a super rare O-Pee-Chee rookie card option that we would really like to get our hands on (in PSA 9 or 10 version). 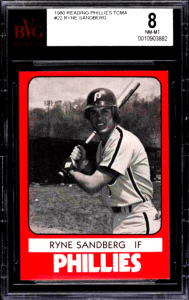 If you don’t mind minor league cards, it’s worth looking back a few years earlier to 1980.

Rated highly by collectors, Sandberg’s 1980 Reading Phillies was produced by TCMA, who regularly featured minor league cards such as this one.

The red border is susceptible to scratches and scuffing, while the black-and-white image itself is fairly basic, showing a grainy Sandberg with a bat clutched in both hands.

The background is nondescript, with equipment strewn on the floor along the field.

It’s hard to find editions that have achieved a high grade because of the issues mentioned above, so an 8 commands a comparable price to a gem mint 1983 Topps. 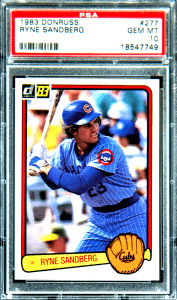 Another popular option at auction, the 1983 Donruss features Sandberg ready to bat. His Cubs gear is clearly visible, in a better image than either of the others we’ve mentioned.

You can immediately tell that it’s a card from the ’80s but that’s no bad thing, and it’s part of a strong set that includes the likes of Wade Boggs.

It’s difficult to find gem mint copies so PSA 10’s are where the money’s at, and they often sell for 6-8 times the price of the average 9 grade.

Either could be a good investment depending on your budget. 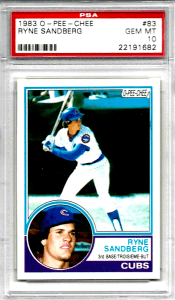 The most valuable Ryne Sandberg rookie card is the O-Pee-Chee version which will go for over $2,000.

If you are on the brink of buying a Sandberg rookie card but are not sure of the purchase please email us at advice@goldcardauctions.com for a second opinion and avoid buyers’ remorse!

A popular player and a Hall of Famer since 2005, the stint in the dugout helped to keep Ryno relevant for another set of Cubs and Phillies fans in the mid-2010s, despite finishing with a dismal 119-159 record as an MLB manager.

Considering the era, Sandberg’s rookie cards aren’t the rarest, but high-graded versions will make a massive difference given they were released back in the early 1980s. There just aren’t that many gem mint copies available today, and it isn’t surprising even when you consider the high print runs.

Hot Read: Most Valuable Baseball Cards of the 1970s

This means that you’ll be able to pick up low grades for a fraction of the price, and Sandberg’s range of early cards is relatively affordable considering his legacy as one of the best ever second basemen in the sport.

Despite the lack of autographs or any of the modern refractors and parallels that swamp modern sets, his rookie cards are sought after, making for a decent mid-term investment that could continue to rise in the coming years.

For example, the average price of PSA 10 versions of the 1983 Topps has increased by 25% in the last year, showing solid growth in recent months.

CTA – If you’re in the mood for throwbacks, check out our top three baseball cards from the 1980s for more great investment options. Further back still, the 1952 Topps is considered to be one of the best sets ever released. For a longer read, there’s the rise and fall and rise again of baseball cards. Let us know if you’re planning to grab a Sandberg rookie below!