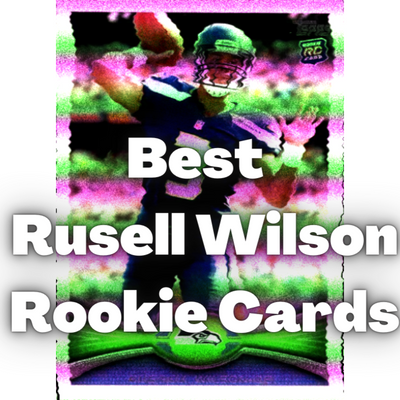 Nobody expected Seattle Seahawks quarterback Russell Wilson to take the NFL by storm. The Seahawks drafted Wilson 75th overall out of Wisconsin in the 2012 NFL Draft. At that point in team history, Seattle’s most successful signal-callers were Matt Hasselbeck (29,434 passing yards) and Dave Krieg (26,132 passing yards).

If you thought Wilson would be on pace to surpass them someday, people would’ve called you crazy.

Cards that could DOUBLE!

He quickly gained traction in the league passing for 3118 yards and 26 TD passes to go along with a mind-blowing 11-5 record which is unheard of for a rookie QB. Being under center and out of the shotgun in college helped him in his rookie season, according to individuals close to the team in 2012.

Since turning pro seven years ago, Wilson has exceeded lofty expectations. Not only will he become the Seahawk’s all-time passing leader, but he should also earn serious Pro Football Hall of Fame considerations once he hangs up his cleats. He’s that good.

Wilson has one Superbowl win in 2014 when they beat the Broncos and might have had another in 2015 had Pete Carroll just run the ball the Marshawn Lynch down at the goal line. Why on earth do you throw the ball when you have a running back whose nickname is beast mode and averaged 4.25 rushing yards per attempt that game?! Many unfounded theories exist, but we regress.

Let’s move on and check out some of the best Russell Wilson rookie cards for investment purposes! 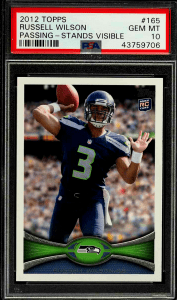 Here is one of the more popular Russell Wilson rookie cards and should be widely available on eBay auctions at any given time. Numbered #165, the 2012 Russell Wilson Topps Rookie Card has a fairly low price point, even for high grades.

The card shows Rusell getting ready to launch the pigskin into the secondary to an open wideout or tight end.

The reverse of the card reads “The Seahawks get the best of both worlds with Russell, who played out of the shotgun in a West Coast offense at NC State before going under center at Wisconsin. He won at both schools leading the Badgers to the Rose Bowl in 2011. He can tilt a room says Seatle GM John Schneider“. 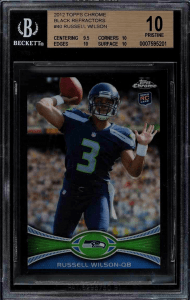 We own the Gold and Red Bordered parallels both graded PSA 9 (thinking about getting your cards graded? Read PSA vs BGS vs SGC first) 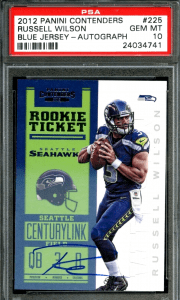 Another sick card comes with a sick price tag (over $1,000). This is one slick Russell Wilson rookie card. The prominent Seahawks Green and Blue colors in the left panel take center stage – it’s a rookie ticket that features the team name, a Seahawks team helmet, and “CenturyLink Field.”

The section at the bottom shows “QB” (Wilson’s position) “3,” (Wilson’s number), and “A” (presumably Wilson’s status as a top rookie). The card’s photo shows Wilson rearing back for a pass. You can’t miss his autograph scribbled at the bottom of the card. Investing in this card will cost you at least $1,000. We won’t be surprised if you earn twice as much in the next five years. 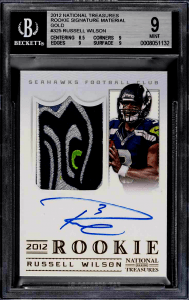 If you want a hefty return on your investment, go for rare rookie sports cards. When supply is low, demand is high. The 2012 National Treasures Russell Wilson RC Autographed Patch /99 (Redemption) fits that bill. This card’s relatively simple layout features a picture of Wilson, a game-worn patch, and his autograph.

Must Read: Top Sports Cards To Invest In Now

Don’t let its simplicity fool you, though – it commands a high price on the market. Prepare to shell out at least $5,000 for this one. Expect high demand for this card since Wilson shows no signs of slowing down. Don’t act surprised if you get a huge ROI when you go to sell.

Numbered #325, the reverse of the card reads, “The knock against rookie Quarterbacks is they can’t read defenses and are careless with the football. That’s not the case with Wilson. In a week 2 matchup against the Cowboys in 2012, he was nearly flawless, completing 15 of 20 passes for 151 yards and a touchdown in leading Seattle to a 27 – 7 win“. 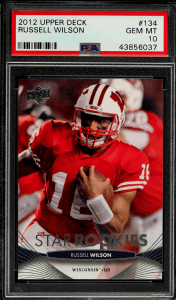 Here is a Russell Wilson rookie card for collectors who don’t have a huge bankroll pr those looking to spend a little less on Wilson. RW is decked out in the red Univesity of Wisconsin uniform and shows him running for his life with the pigskin in his left arm.

The 2012 Russell Wilson Upper Deck rookie card is numbered #134, and the reverse reads, “After three seasons at NC State, Wilson transferred to Wisconsin where he was named the 2011 Griese-Brees Big Ten Quarterback of the Year after setting school single-season marks for completions, passing yards and TD passes“. 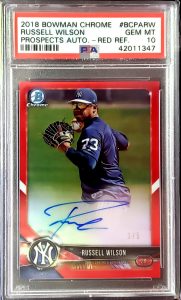 Wilson is a two-sport star: he also played baseball for the North Carolina State Wolfpack from 2008 to 2010. The Colorado Rockies made him the 140th overall pick of the 2010 MLB Draft.

He has since suited up for the Texas Rangers and New York Yankees. This rare sealed autographed card shows Wilson in a throwing stance while wearing Yankees Blue.

Only five of these cards exist – consider yourself very fortunate if you get one. The 2018 Bowman Chrome Russell Wilson Prospects Red Refractors Auto also commands a hefty price on the market – it will set you back by at least four digits.

Nonetheless, you can make up for it. You should expect a sizeable ROI with a rare card in the next few years. 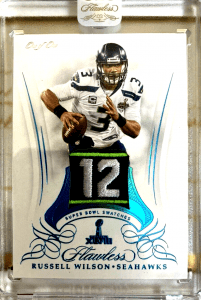 Panini created this Russell Wilson card to encapsulate his Superbowl win against Peyton Manning and the Denver Broncos.

Numbered #SBXLVIII the back of the card reads, “The Seahawks engineered the third-largest blowout in Superbowl history by beating the Broncos, 43-8, in SB XLVIII. Wilson threw for 206 yards and two touchdowns in complete control under center. He also became the first starting Quarterback in the SB not to get sacked while recording a passer rating above 120 (123.1)“. 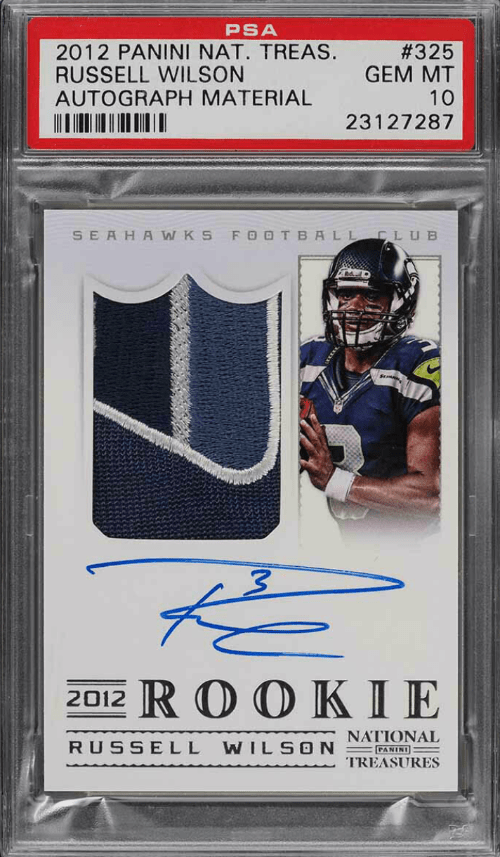 He is still going strong but expects a slight slow down as he ages and his numbers regress. If you would like an estimated value of any of your Russel Wilson football cards please email us at value@goldcardauctions.com. 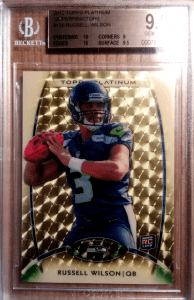 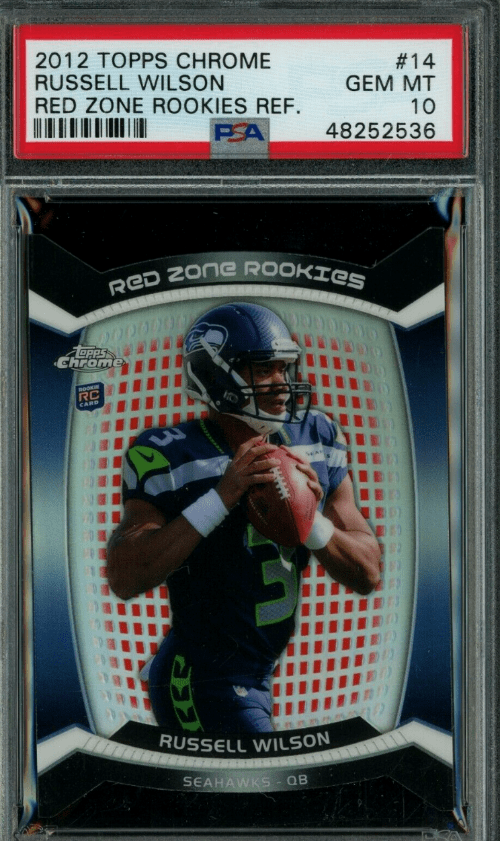 Russell Wilson’s rookie cards are an underrated investment as he is one of the top Quarterbacks in the league, and his card prices don’t match up with the best QBs.

As he gets older, we see a slowdown in his card prices, and his numbers regress but rebound once he is elected into the Pro Football Hall of Fame.