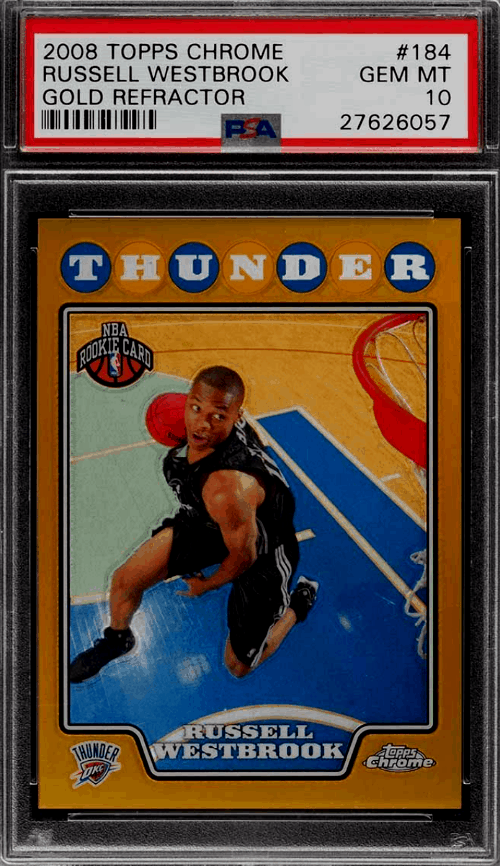 It didn’t take long for Westbrook to find his way in the league as he averaged an earth-shattering 15.3 points and 5.3 assists per game during his rookie campaign.

Here are the best Russell Westbrook rookie cards from an investment standpoint.

The 2008 Russell Westbrook Topps Chrome rookie card is the flagship Westbrook rookie card and pictures him laying the ball up to the hoop.

Numbered #184 this card is a must-have for Westbrook fanboys.

This is in our opinion the best looking Russell Westbrook rookie card.

The Russell Westbrook SP Threads Rookie Card is numbered #67 and has a very cool black and blue color theme to it.

The large print run makes the 2008-09 SP Rookie Threads card for Russell Westbrook one of the most affordable options among his signed rookie cards.

Another sick-looking Westbrook rookie card with a patch and auto that will cost well into the 4 digits.

The card here has a rare retail version that replaces the jersey piece with red foil. The retail edition is not numbered.

The above card is his most expensive rookie card.

A print run of 225 sounds gargantuan for Exquisite Collection—and it is—but that did not keep the high-end Russell Westbrook rookie card out of the top spot.

This is the most affordable Westbrook rookie card on this list and comes in a variety of parallels.

This card is another great one from Westbrook’s rookie season and features a great jersey patch right in the middle of the card.

There is also a signature on this card, although it is a sticker instead of being on-card.

Add in the limited print run of under two hundred copies and you have a card that is worth a strong look from investors who believe in the explosive guard.

Westbrook’s signature smile is on full display on this card as he is grinning from ear to ear.

While not quite on the level of the other cards, it’s still a fantastic option.

Westbrook is one of the most polarizing players in the league but no one can deny how exciting he is to watch… check out all of his rookie cards below!

We don’t expect Westbrook RC values to rise faster vs other star player rookie cards... in fact, we expect them not to rise as quickly as other players (i.e. Lebron James Rookie Cards, Zion Williamson Rookie Cards).

We can describe how we feel about investing in Westbrook RCs’ in one word… MEH.

We are not buying Westbrook rookie cards and are not necessarily advising you to buy any either.

To us, Westbrook does not come off as a team player and feels like a ball hog. We don’t see him winning championships anytime soon.