Hachimura was born in Toyama, Japan on February 8, 1998. Although he played some baseball (Japan’s most popular sport) as a child, he excelled in basketball. He helped Meisei High School win its second All-Japan High School Tournament title in 2013.

That same year, Hachimura signed a National Letter of Intent to suit up for the Gonzaga Bulldogs men’s basketball team. He got off to a slow start in his freshman year but enjoyed a breakthrough junior year two seasons later. Hachimura averaged 19.7 points and 6.5 rebounds in 37 games for the Zags during the 2018-19 NCAA season.

The Wizards made the 21-year-old Hachimura the ninth overall pick of the 2019 NBA Draft. Since then, he has averaged 13 points and close to six rebounds for Washington. 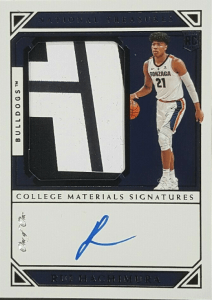 This card is hard to come upon and if you do it will cost a pretty penny.

The card features Hachimura in his Zags jersey looking for a lane or open man to pass to.

This is a must-have card for high-end Rui Hachimura collectors.

Here is a great card for the casual collector as it should come somewhat cheap (for now). 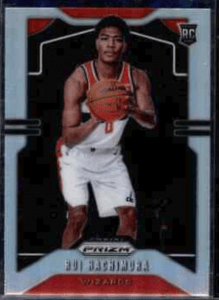 The Rui Hachimura Panini Prizm Rookie Card features Ru-ski in his Washington Wizards uni while shooting what it appears to be a free throw.

The card is numbered #255 and reads “The Wizards made history in 2019, becoming the first team to draft a player from Japan when they selected Hachimura ninth overall. Born in Toyama to a Japanese mother and a Beninese father, the forward led his high school team to three All-Japan tournament victories before playing three seasons at Gonzaga.” 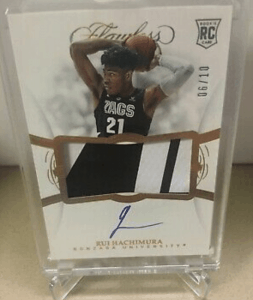 When you purchase this college-based Rui Hachimura rookie card, you also get a part of history – it has a game-worn patch from the 2019 NCAA Tournament (Harchimura and the Zags made it to the Sweet Sixteen that year). You can see Hachimura’s autograph below the patch.

Plus, there are only five copies of the Emerald version on the market. Since supply is low, demand (and price) is high. It’s a worthy investment if you ask us.

This is one of the few Rui Hachimura NBA-based rookie cards on the market which features a game-worn patch and his autograph. Throw in a popular brand (Panini), and you get a sports card that has most of the intangibles. You’ll be proud of yourself for purchasing this one when Hachimura becomes one of the elite forwards in the NBA.

This card is a good investment option for the casual sports card collector – it’s not as pricey and it should give you a good ROI. That’s a win-win situation.

The front of the card shows Hachimura in his Washington Wizards jersey. His autograph is scribbled at the bottom.

Hachimura can pick up where former Japanese NBA players Yuta Watanabe and Yuta Tabuse left off. Without a doubt, he is the most promising pro basketball prospect from the Land of the Rising Sun.

Hachimura should become one of the go-to players of the Washington Wizards together with John Wall and Bradley Beal. We also won’t act surprised if Hachimura becomes the first Japanese-born NBA All-Star in a few years.