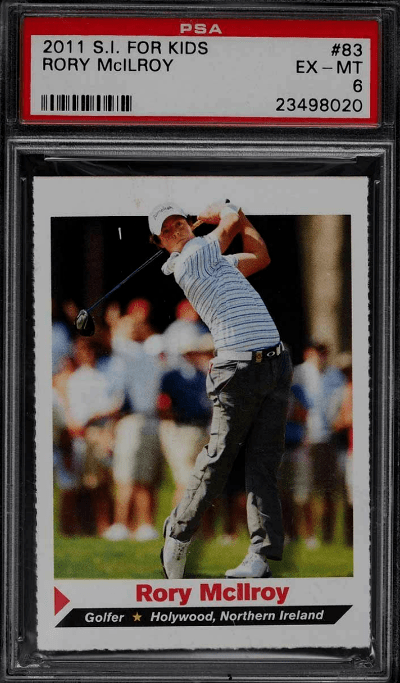 McIlroy recently dropped out of the top ten for the first time following a poor final round at the Arnold Palmer Invitational, while he hasn’t won a major since 2014.

Along with Tiger Woods, he’s been the face of golf for years, going so far as to have an EA-branded video game of his own. However, he’s the first to admit that he’s currently missing a spark, and isn’t living up to his own high standards.

Here’s a roundup containing three of the best Rory McIlroy rookie cards, along with investment advice if you think he has what it takes to climb the summit once more.

McIlroy rookie cards are found in a number of different sets, and even years. Depending on what you consider an RC to be, you’re spoiled for choice. There are no definitive rules, but most collectors would start with the 2011 SI card.

The first recorded card to feature McIlroy, this was included in the Sports Illustrated for Kids magazine released just over a decade ago. Printed on thin paper, it has perforated edges, which can lead to a number of condition-related issues.

It’s a great image that sees a young McIlroy contorted after a massive swing. His cap peeks out of the border at the top, while his name, sport, and nationality are listed at the bottom.

As McIlroy had already won his first major (2011 US Open), many collectors held onto these cards at the time, so there’s an abundance of lower-grade copies in the present. 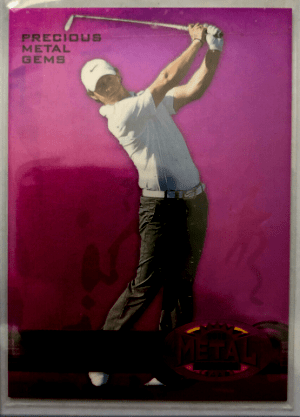 If you don’t know about Precious Metal Gems cards, they’re one of the more famous and iconic parallel sets from the hobby. PMG cards were originally included in 1997-98 Metal Universe Basketball sets, containing stars such as Michael Jordan and Kobe Bryant.

Rather than the red or green colors seen with original 1990’s sets, this McIlroy card is given a luxurious purple finish, and it’s only numbered 125 copies. Originally handed out to selected Upper Deck employees, it’s another rare card that is extremely popular. 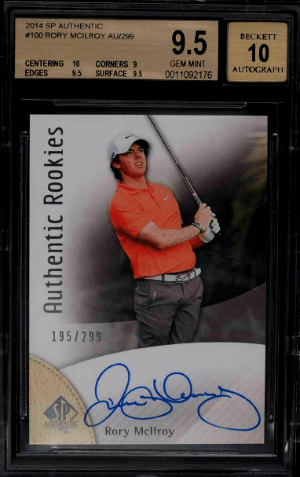 The final card came out in 2014 as part of a popular set that contains a variety of serial numbered McIlroy options. As his first SP Auth card, it’s still considered to be an RC despite coming out three years after the SI release.

Featuring a simple shot of McIlroy after a successful swing, there’s a large ‘Authentic Rookies’ logo on the left of the card. There’s also a massive on-card auto at the bottom, which is the main reason behind the increased price tag. 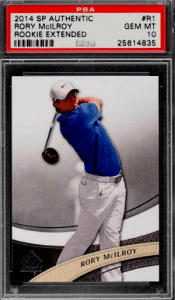 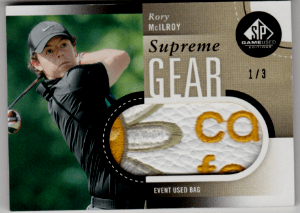 As one of the modern greats, McIlroy rookie cards could be some of the best investment pieces in the hobby. It’s easy to forget that he’s still only 31, with the majority of his career ahead of him. Can the same be said for potential majors wins?

Despite his unquestionable talent, it sometimes seems like he lacks the hunger seen a decade ago when he still had it all to prove, and he’s building a reputation as a choker in the biggest moments.

If you think McIlroy can get past his mental block and get back to winning ways, his RCs have to be seen as a no-brainer.