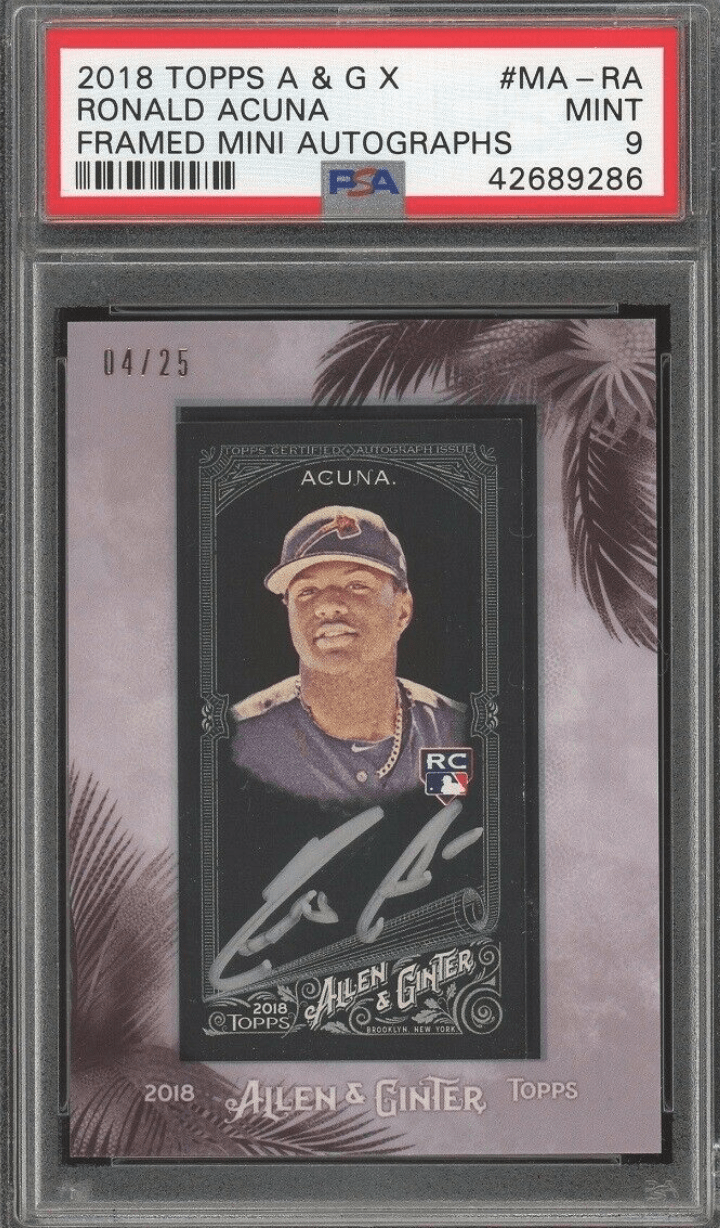 Ronald Acuna and Juan Soto are two of the most exciting prospects in baseball, with the entirety of their careers ahead of them. Despite their relative youth, they’ve shouldered the responsibility and pressures that come with being a prodigy effortlessly in the last few years.

Acuna helped carry the Atlanta Braves to the NL East title, while Soto won the 2019 World Series with the Washington Nationals. They’ve both had an impressive start to life as an MLB player, but whose rookie cards are the better investment?

Here’s everything you need to know to make an informed decision for yourself.

Acuna vs Soto: The Stats

The duo has broken multiple records, while their talents have been recognized despite their relative youth. For instance, Soto holds the highest on-base percentage (.406) and OPS (.923) for a teenager, he’s the first teenager and youngest player to steal three bases in a single game, and he completed the most walks (79) by a teenager in MLB history.

In 2019, Acuna missed the 40–40 club by just three stolen bases, but still managed to enter the prestigious 30-30 club as the second-youngest member. He also led the major leagues in power-speed numbers (38.9).

These stats are only the beginning, and their rookie cards were already inflated compared to the norm when they made their breakthrough a couple of years ago.

National League Rookie of the Year

The 2018 National League Rookie of the Year award was hotly contested by the two young stars in their breakthrough season, although Acuna broke away towards the end. If anything, he exceeded expectations despite being touted as the top prospect in baseball at the time. Soto was the runner-up by 55 votes.

For Soto, he reached base in all seven World Series games as the Nationals clinched the win in 2019, further enhancing his reputation – and the price of his rookie cards.

The competition between the two players is further stoked by the fact that they both play in the same position, but they were happy to engage in friendly banter when they faced off for the first time. It’s not as though they aren’t aware of the rivalry, but they pay little attention according to Soto in a 2019 interview;

“We just try to put that away – how other people talk. They tried to make us fight last year because of the Rookie of the Year. But we just forget about it. We just try to play baseball and be friends and have fun.”

There’s no doubt that they represent the future of baseball, and there’s hardly any difference in age. Soto will be 22 in October 2020, and Acuna is just ten months older.

There’s still a long way to go before they can safely be crowned as the two biggest names in the sport, while much depends on whether they’ll be able to avoid the injuries and off-field distractions that come with being a top guy.

Heading into Acuna’s third season, he’s the early betting favorite to be crowned National League MVP in 2020. It would make him the youngest player in MLB history to win an MVP award, further enhancing his reputation and the price of his rookie cards.

Meanwhile, the latest crop of phenoms like Vladimir Guerrero Jr., Fernando Tatis Jr. (check out the best Tatis Jr. Rookie Cards) and Eloy Jimenez headlined top prospect lists heading into the season, so Acuna and Soto need to be on their toes if they’re going to stay ahead of the chasing pack.

The 2016 Bowman Chrome is the most expensive early Soto card by a significant margin, regularly selling for four-figures. Interestingly, it’s a prospect edition rather than a rookie card.

His incredible start to life as an MLB player was duly noted by collectors and investors, and the prospect autograph is widely seen as the most important version because of the strength of the Bowman brand and the on-card signature.

Acuna’s cards have risen more significantly in the past few years, which makes sense given his current form and his overall ceiling. There’s a reason why he’s the favorite to win the National League MVP award in 2020, which would see his rookie card prices rising more sharply.

Soto and Acuna’s rookie card prices already reflect the level of expectation placed on both players, which is why they’re so expensive compared to most of the others from their age group. They’re not particularly inflated for now, but you’ll be making an educated guess about how their careers will pan out. There’s a good chance for profit if all goes to plan.

In terms of who is the better investment as of right now, much depends on who has the higher ceiling, which even the top scouts will struggle to decide. Soto will only get better with the bat, while Acuna already won their duel for the Rookie of the Year award in 2018.

Acuna is only 10 months older, which goes against the narrative that Soto is significantly younger than his main rival. In the end, much will depend on whether they can stave off injuries in the long-term, as well as avoiding off-field temptations.

If I had to pick between the two, Acuna’s prospect cards have already risen in price, and it’s hard to find a better option if you’re aiming to take a punt on one of the most hyped players in recent years.

It’s not as though Soto’s rookie cards are a bad option, just that he falls slightly short of Acuna for now. Much like the 2018 Rookie of the Year vote, they’re both deserving of your attention.