Nashville Predators team captain Roman Josi is one of the top defensemen in the NHL.

Josi was born in Bern, Switzerland on June 1, 1990. The Predators made him the 38 th overall selection of the 2008 NHL Entry Draft.

Josi played for SC Bern and the AHL’s Milwaukee Admirals before becoming a regular part of Nashville’s rotation during the 2011-12 NHL season.

His sterling play on the ice earned him an eight-year, $72.4 million contract extension recently.

If you want a defenseman who can shackle the opposing team’s top goalscorer, Roman Josi is your guy.

Let’s check out some of Roman Josi’s best rookie cards for investment purposes.

This is one of the few prominent Roman Josi rookie cards on the market today. 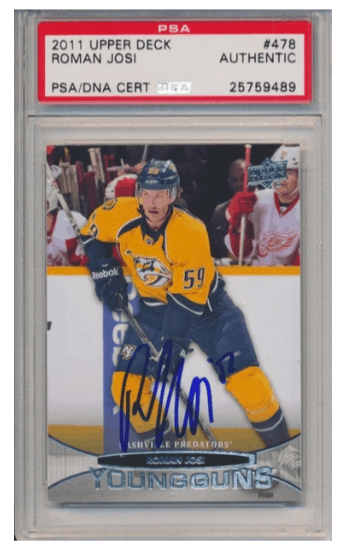 The photo shows a 21-year-old Josi in action against the Detroit Red Wings.

You can’t miss Josi’s autograph below the image. Other versions of this card sell between $180 and $200.

You can invest in one for as low as $65 or $70. Following the “buy low, sell high” principle, go for the lower-priced version.

It should gain traction in the next few years.

This is another prominent Roman Josi card worth investing in. 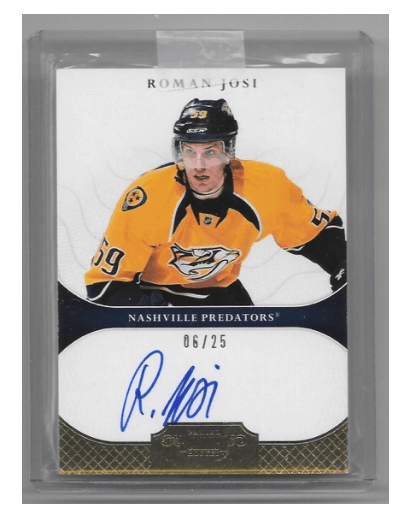 The 2011-12 Dominion GOLD /25 Rookie Hard Signed Roman Josi #123 features a simple layout, Josi’s photo, and his autograph at the bottom of the card.

It’s a rare Josi rookie card which should give you a nice ROI after a few years.

If you’re a bona fide hockey card collector, you may veer toward high-scoring centers and wingers to get a hefty ROI.

However, let’s not forget Roman Josi is one of the more preeminent defensemen in hockey today.

He’s durable – he’s missed an average of just four games in the past five seasons.

In a brutal sport such as hockey, that’s saying a lot.

Plus, Josi is a two-time NHL All-Star who helped the Predators reach the 2017 NHL Stanley Cup Finals.

On that note, Josi and the Preds should continue making noise in the NHL’s Western Conference.