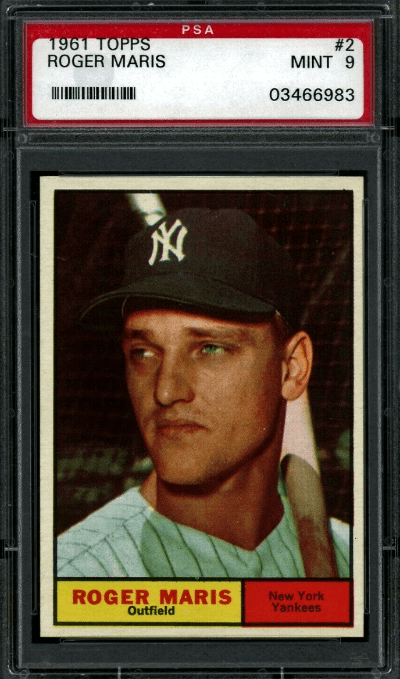 Roger Maris (1934-85) was a right fielder who is arguably best known for setting the MLB single-season home run record with 61 home runs in 1961, which lasted until being broken by Sammy Sosa under questionable circumstances in 1998.

(Then again, even Maris’ record has its own controversy, as the season had been extended to 162 games, rather than the 154 played by Babe Ruth when he got 60 in a season!)

Ideal Sports Card Investing Portfolio (How Much To Invest?)

Roger Maris has a stellar legacy, thanks to a trio of World Series wins and seven All-Star appearances.

Here’s a rundown with three of the best Roger Maris baseball cards, along with advice if you’re looking at the player as a potential long-term investment option.

As you might have guessed, we’re sticking with three vintage cards that all hail from a bygone era. As such, we’d stick to graded options when possible, to avoid any potential fakes or reprints that are being sold as the real thing. 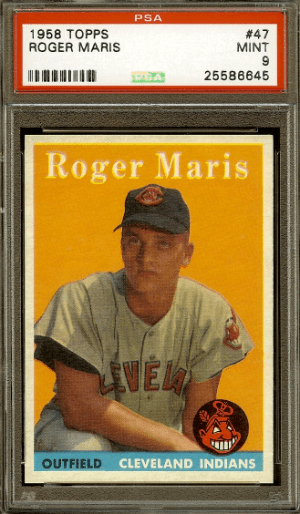 Maris’ RC is first up and is his most popular option for obvious reasons. His earliest card is actually from his second season in the major leagues, but that hasn’t had an impact on the overall value.

The 1958 Topps card features a great image of Maris on one knee, in a Cleveland jersey. The bottom tab notes his team and position, with a small Indians logo at the bottom. A real product of the era, it’s tough to find well-centered copies in the present day.

Value-wise, it’s clearly a step above the others on the list, even if it might not match up to the very best HoF players from the era such as Hank Aaron.

Next up is one of the first cards from the 1961 Topps set. Maris was locked in battle with Mickey Mantle at the time, as both players vied for supremacy at the plate.

Maris ended up breaking Babe Ruth’s single-season home run record this year, as well as winning the World Series while being named as the American League MVP. It’s easy to understand why his ‘61 card is held in such high regard.

It features a zoomed-in profile shot of the player, with a simple stadium background set against a dark backdrop. While it doesn’t compare to the ‘58 RC in terms of pure value, it’s another good investment due to his achievements that season. 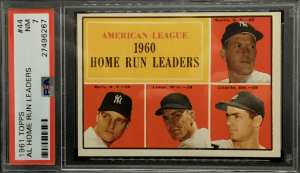 The 1961 Topps Home Run Leaders card celebrates the quartet who hit the most home runs in 1960. As such, Maris is joined by Mickey Mantle, Jim Lemon, and Rocky Colavito on the front of the card, with each player given a separate box that shows a small profile image.

“A mint grade will sell in the four figure range, and it’s sometimes overlooked compared to the others that made the list.”

Topps used a deep red for the background, helping it to stand out from the crowd, while it’s one of the only cards to feature both Maris and Mantle. 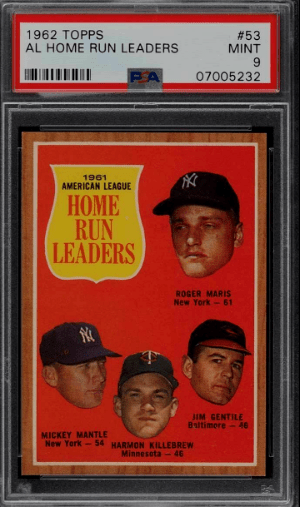 The most expensive Roger Maris baseball card is the 1958 Roger Maris Topps rookie card #47 but the 1961 Topps Maris card is not far behind.

If you would like an estimated value of your Roger Maris baseball card please post in the comments section below (if it’s graded). For non-graded cards please send photos of the card to value@goldcardauctions.com.

It’s fair to say that Maris’ cards are some of the best that money can buy, especially if you’re determined to pick up a version from the early years. Time and scarcity have helped copies that have retained their original condition, and his RC is a high ticket item in the present day.

Maris is undeniably a legend, and his baseball cards are ideal from an investment standpoint. They’re not too expensive, while they have a player with a solid legacy attached. The era is also heavily romanticized, especially due to his rivalry with the likes of Mantle.

As for Maris, his RC looks to be a great long-term investment piece, even if it isn’t ‘the holy grail’.