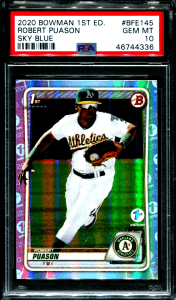 He signed for the Oakland A’s after their spending restrictions were finally lifted, and earned a $5.1m signing bonus which tied for the highest payout in 2019.

One for the future, his collective list of rookie cards are already beginning to pick up in price as hype grows.

We’ve prepared a list with three of his best RC options, along with an investment report as he aims to enter the major leagues in the next few years.

Here are three of the very best Robert Pauson rookie cards that are available right now… we will update this list as more Robert Puason RC are released.

Arguably his most important rookie card so far, the Bowman Baseball Chrome Prospects features a large image of Puason in action, with his hand reaching beyond the border on the left-hand side.

He has a baseball clutched in his mitt, as well as a pair of aviators to finish the look.

There’s a 1st Bowman Logo which collectors are always on the lookout for, while he’s wearing his Oakland A’s uniform.

You’ll find the card number located in gold at the bottom, along with a team logo. 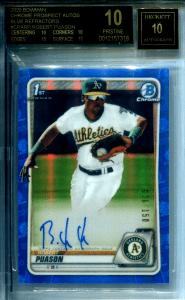 This is one bad mother of a card bruh!

#CRA-RP is a signed version of the Bowman Baseball Chrome Prospects listed above, with the exact same image and basic layout.

The one major difference is the inclusion of an on-card signature at the bottom, which raises the potential value by a significant amount.

As with the unsigned version listed above, it comes with a list of parallels that further inflate the value, although there’s no Shimmer refractors and no Speckle or Purple refractors. 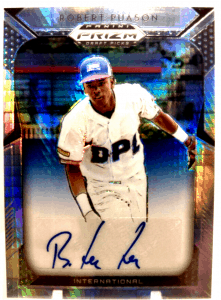 Puason’s 2019 Panini Prizm Draft Picks also has a large feature-length image of the player, along with the special edged borders found with all Prizm cards. The lined effect causes Puason to stand out against the background, enhancing his stature.

A sticker signature is a slight letdown compared to the Bowman card listed above, while he’s wearing his Dominican Prospect League (DPL) uniform instead of an Oakland A’s jersey.

It comes with the usual range of Prizm parallels listed below: 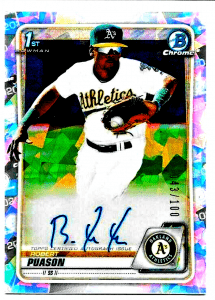 The value of Robert Puason rookie cards are all over the place and largely depend on if the card has an autograph and a shimmer of some sort or the word ATOMIC in the description.

Recently rated as the sixth top prospect in MLB by NBC, it’s worth remembering that Puason is only 17. I have a pair of boots that are older than him.

He might be a 6-foot-3, 165-pound specimen, but he still needs to be given time to adapt to the pace of the game in the U.S., as well as to realize his obvious potential.

According to scout reports, Puason has the ability to become a five-tool player for the A’s. Given the hype, his rookie card prices have already begun to increase accordingly, although you will have to wait for a while to see the player in action.

If he’s half the player he’s thought to be, Puason’s early cards will be sure to inflate as he gets stronger and more experienced. There’s always a chance that you could get burned by yet another prospect that fails to make the grade, but he looks to be a sound investment heading into the 2020 season.

If we were to purchase a Pusason rookie card in the future (and we might) we would focus on the Bowman Chrome refractors, shimmers, or atomics.

Ownership Disclosure: We do not own any Puason rookie cards at this time.

CTA – Robert Puason is clearly one to keep an eye on in the future. If you’re in the mood for an Oakland A’s legend, we have a list with the best Mark McGwire rookie cards on the market, or check out our Hot 10 for some great investment ideas!