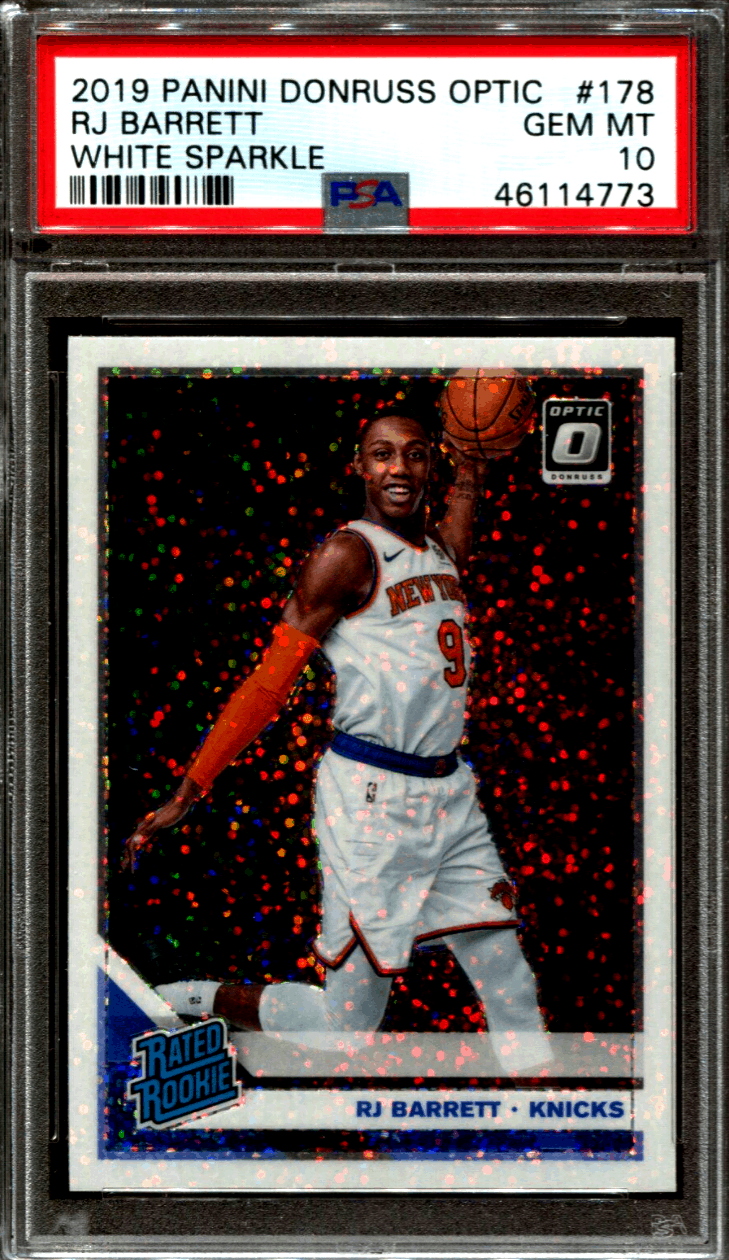 Interest in RJ Barrett Jr rookie cards has continued to rise after he was picked third overall in the 2019 NBA Draft alongside the phenom of all phenoms Zion Williamson.

RJ Barrett Rookie Stats: 56 games | 14.3 PPG | 2.6 Assist | 5.0 Rebounds | 1 Steal. He was having a very fine rookie year and really was starting to impose his skill on the league before the season was called off due to the COVID pandemic.

He is the son of former basketballer Rowan Barrett, who’s the current GM of the Canadian men’s national team.

RJ Barrett is a run and gun slasher who favors off the ball-screens when driving to the basket for a bucket. He is able to get downhill quickly to the net, pull up in space on a dime, or simply toss up a runner with high accuracy.

As he matures he should develop into a top 10 and maybe even a top 5 player in the league.

Here’s the lowdown on three of the best rookie cards to look out for in regards to RJ Barrett Jr. 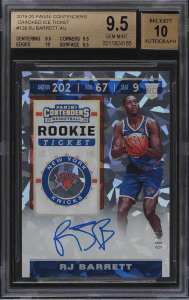 His college draft pick is autographed, and there are various versions that differ in price and rarity. The signature itself is a simple RB, but it’s enough to raise the value of the card drastically.

The College Ticket will see at least 25-50 bids on average when it’s available at auction, so expect to compete with multiple investors and collectors if you’re determined to snag one.

The back of the card features a roundup of his freshman season at Duke, as well as a couple of simple quotes from the man himself. Despite the bidding wars, you should be able to grab one for $200-$300. 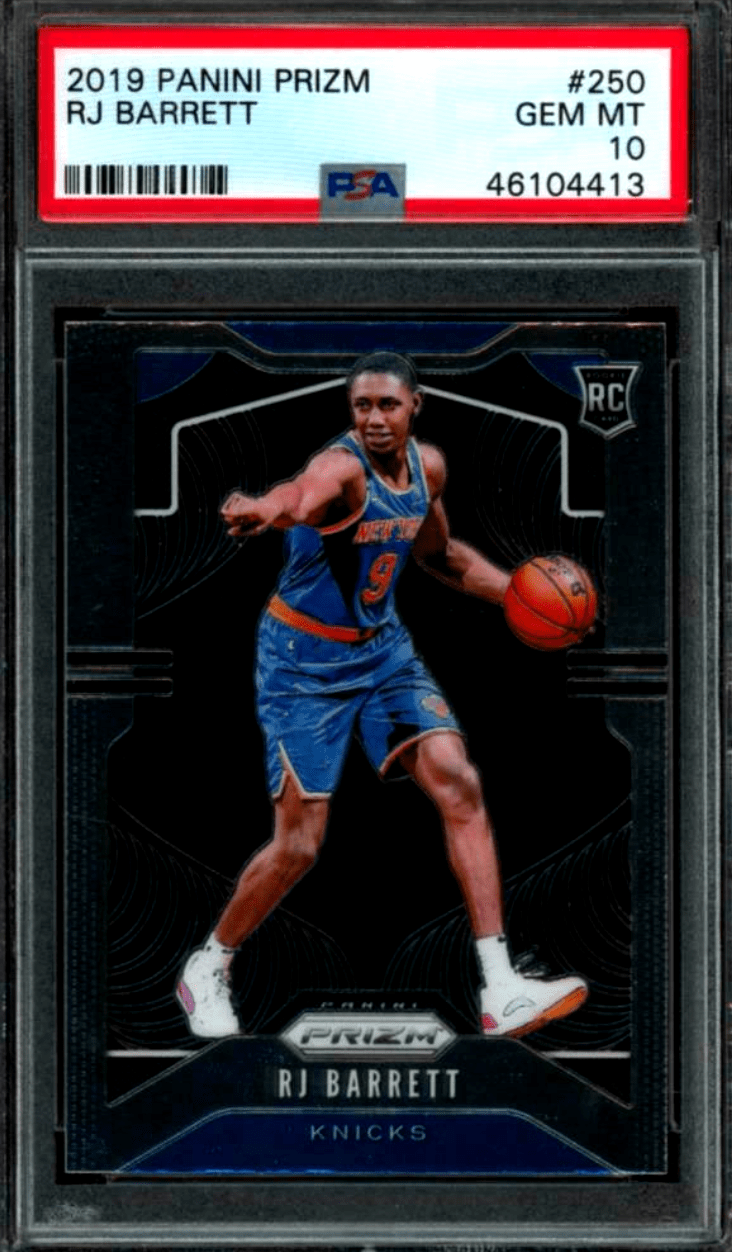 As always the Prizm rookie card is a great long-term investment when it comes to Barrett rookie cards and is an ideal buy for most collectors.

Numbered #250 the card shows Barrett directing traffic and looking to pass the rock. We have bought a few of these cards in both PSA 10 and BGS 9.5 (Who wins PSA vs SGC vs Beckett)

His name and team name (New York Knicks) are centered at the bottom while the Prizm RC logo is placed in the upper right corner. 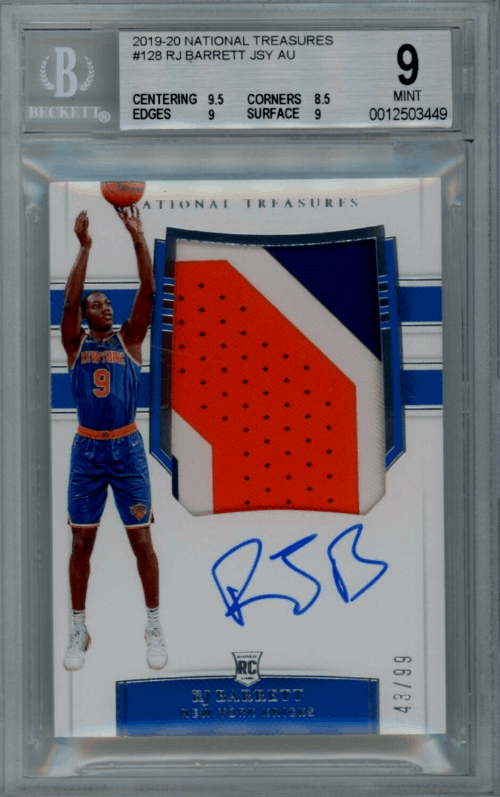 Much like the RJ Barrett Panini Contenders Cracked Ice RC the RJ Barrett National Treasures RC is going to require a big old pile of cash if you wish to obtain this bad boy.

We have a very good feeling about the 2019 RJ Barrett National Treasures RPA /99 RC and wouldn’t be surprised to see it double in value this year.

BUT if you do have the coin to afford this bad boy you might be laughing all the way to the bank in 5 years or so. Imagine a couple of league MVPs, tons of playoff games, a bunch of double-doubles, and some triple-doubles sprinkled in… are we delusional maybe… BUT we have a good feeling about this cat and the New York Knicks.

Here is a great looking Barrett rookie card with some really cool looking parallels (see above).

Numbered #178 the card shows RJ jumping straight up in the air with the ball in his left hand, almost as if he is throwing a football… he has an odd look on his face that is somewhere between a smile and a snarl. 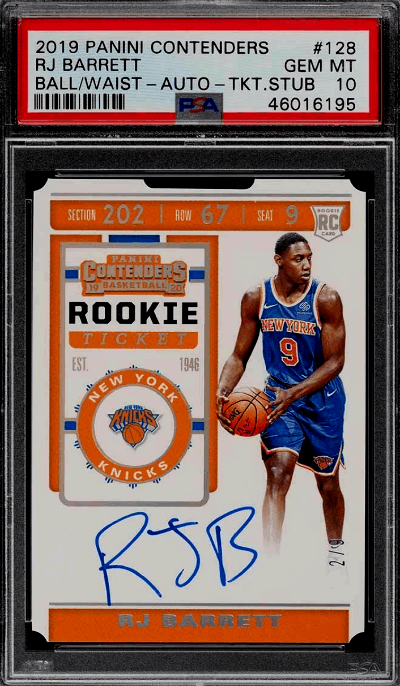 The exact value of any one of the RJ Barrett RC is hard to predict and varies based on a variety of factors (i.e. grade, card brand, etc).

RJ Barrett rookie card price? If you would like a price estimate of an RJ Barret card please email us pictures of both the front and back of the card to value@goldcardauctions.com

Thinking about tossing down some major cash on an RJ Barrett Jr. rookie card and would like some advice? Hit us up at advice@goldcardauctions.com or DM us on our Facebook page (pro-tip the DM Facebook will be the faster option 9 times out of 10). 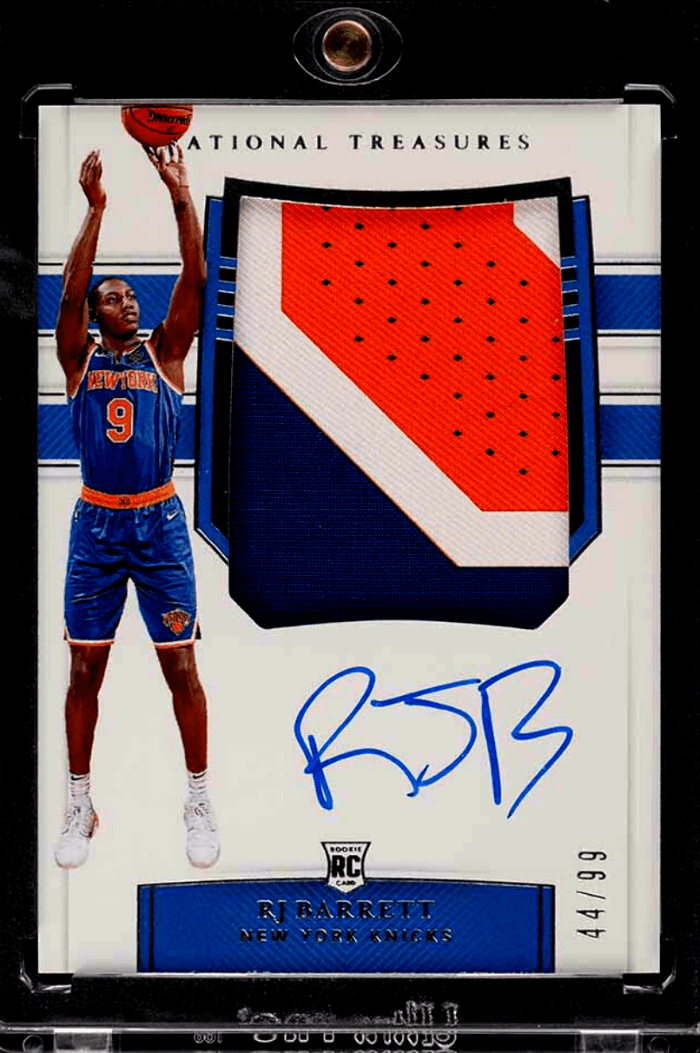 In recent weeks, Barrett posted his first career double-double in his maiden NBA victory over Chicago Bulls. He’s still struggling to hit his free-throws, but his rookie stats are otherwise impressive so far.

The player has also risen to the challenge when playing point-guard, highlighting his versatility across the court.

The one downside is playing for the New York Knicks which has been a franchise in ruins for more than a decade now.

What in the heck has happened to this once great franchise… at some point that has to turn it around right?

We think they will and sooner rather than later.

Finally, he might not be as popular as former Duke’s teammate Zion, but Barrett is still a viable investment if you can pick up a card for the right price. His future looks bright, and his rookie cards are yet to inflate to ridiculous prices like many others.