Reggie Miller (08/24/65) is a retired shooting guard who spent 18 seasons with the Indiana Pacers. Best known for his shooting ability, Miller was a five-time All-Star and led the league in free throw accuracy five times.

Here’s everything you could need to know about Miller’s best rookie card options, as well as investment advice if you’re hoping to capitalize on nostalgic Pacers fans in the future. This is an easy task, as Miller has just one rookie card, which was released in 1988-89 Fleer Basketball. 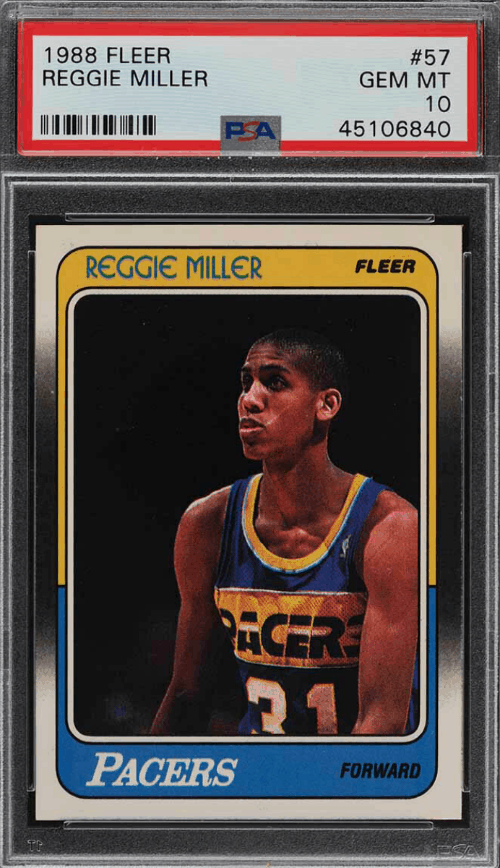 As Miller’s only rookie card, it’s fair to say that the 1988 Fleer is the best option on the market! The card doesn’t have a great design, with a black section in the middle of the border, which dulls the overall look.

There’s a close-up action shot of the player with a dark stadium background. A blue and yellow section adds some color, lists his name and team, and matches up with the vintage Pacers kit. Relatively affordable until you begin to look at mint copies; it’s hard to do better if you’re looking at Miller’s older options.

As there’s only one Miller RC, we’ve decided to include another of his popular cards, which could make for a great investment piece.

From the 2003 Exquisite Collection Noble Nameplates subset, adding a player patch and an on-card auto make this a valuable option. It has an image of Miller going for one of his routine shots and a serial number in the top left corner. There are no parallels, which makes it even rarer.

It’s fair to say that Miller is seen as the greatest Pacers player of all time, and for a good reason. He gave his career to the team, going on to symbolize the era for fans. He entered the Hall of Fame in 2012, and the number 31 shirt was retired by the Pacers.

Miller was one of the most prolific shooters in the history of the NBA and dropped eight points in 8.9 seconds vs the Knicks in an impressive display in the 1995 Eastern Conference semifinals, clinching the win against improbable odds.

He currently works as a commentator, and while he might have had a few questionable takes in recent years (such as if his career were taking place now, he’d be averaging 45 points per game), the shooting guard has always been known for his trash-talking.

His RC is a great investment piece, and others like the Noble Nameplates show that you don’t have to stick with his original release if you’re hoping for high prices and lots of interest.

We’d hold onto the cards as a long-term investment piece for the best possible results, as it hasn’t even been a decade since he entered the HoF.