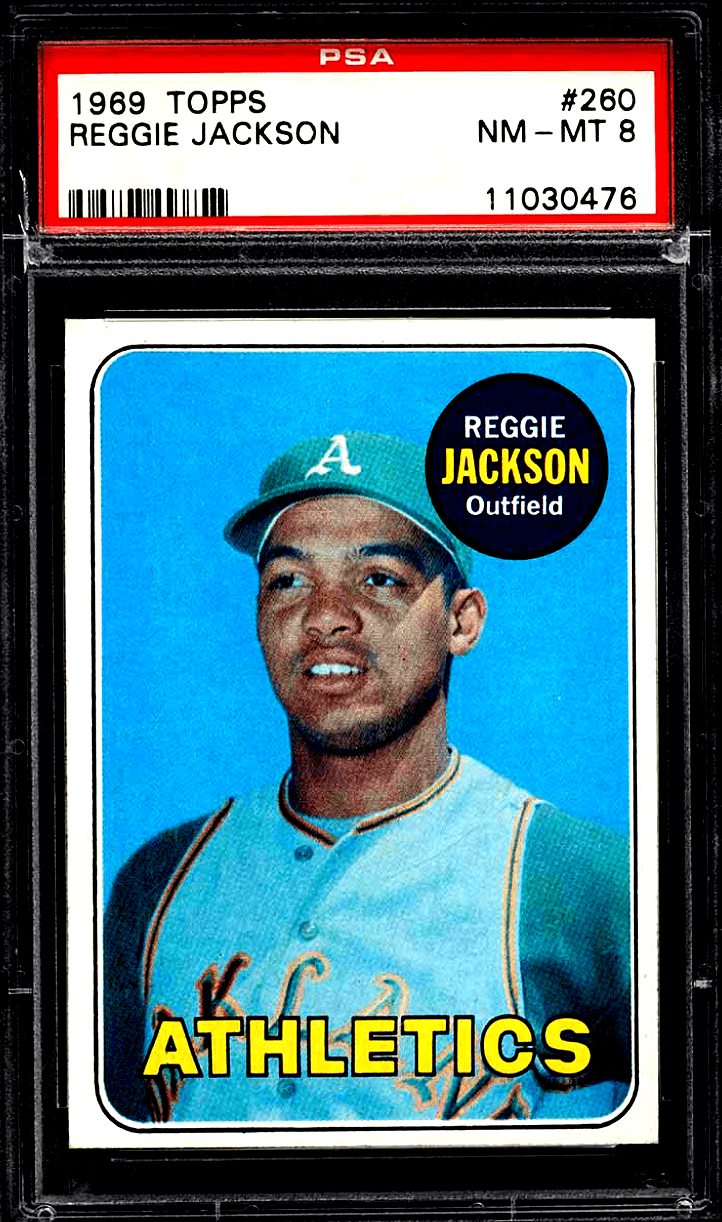 Reggie Jackson (05/18/46) is a retired outfielder who spent 21 seasons as an MLB player for a variety of teams, including the Yankees and the Oakland A’s.

A 14-time All-Star and a five-time World Series champion, it’s hard to think of many others who have accomplished as much as he has in the sport.

Here’s a list with three of the top Reggie Jackson cards on the market, including an investment report looking at the next few years.

Jackson has a ridiculous number of collectible cards, which is no surprise considering he was a star for over two decades.

His last card as an active player was released in the 1988 Fleer baseball set. Many were released in the years following his retirement, and one even manages to make the list below!

The first card is Jackson’s 1969 Topps. Released in his rookie year, it has a simple white border, with a close-up image of the player staring slightly off-camera. The background is a clear blue sky, and it’s seen as the key RC, and therefore the most expensive card from the set aside from a Mickey Mantle.

His name and position are included in a purple circle in the top left corner, which does detract from the card on the whole. It looks like a sticker that could be peeled off at longer distances, and it even covers a small section of his hat.

The definitive Reggie Jackson RC, it’s hard to do better than the 1969 Topps if you’re looking for a prestigious option. Of course, it’s over half a century old, and that can lead to a number of issues relating to the condition. This includes typical problems such as wear and tear, as well as excess print and poor coloring, and image tilts which plague the set.

This means that PSA 8.5s are seen as a good grade, and will typically sell for thousands of dollars. A PSA 7 grade will go for hundreds, while 5’s and below are relatively affordable in comparison. 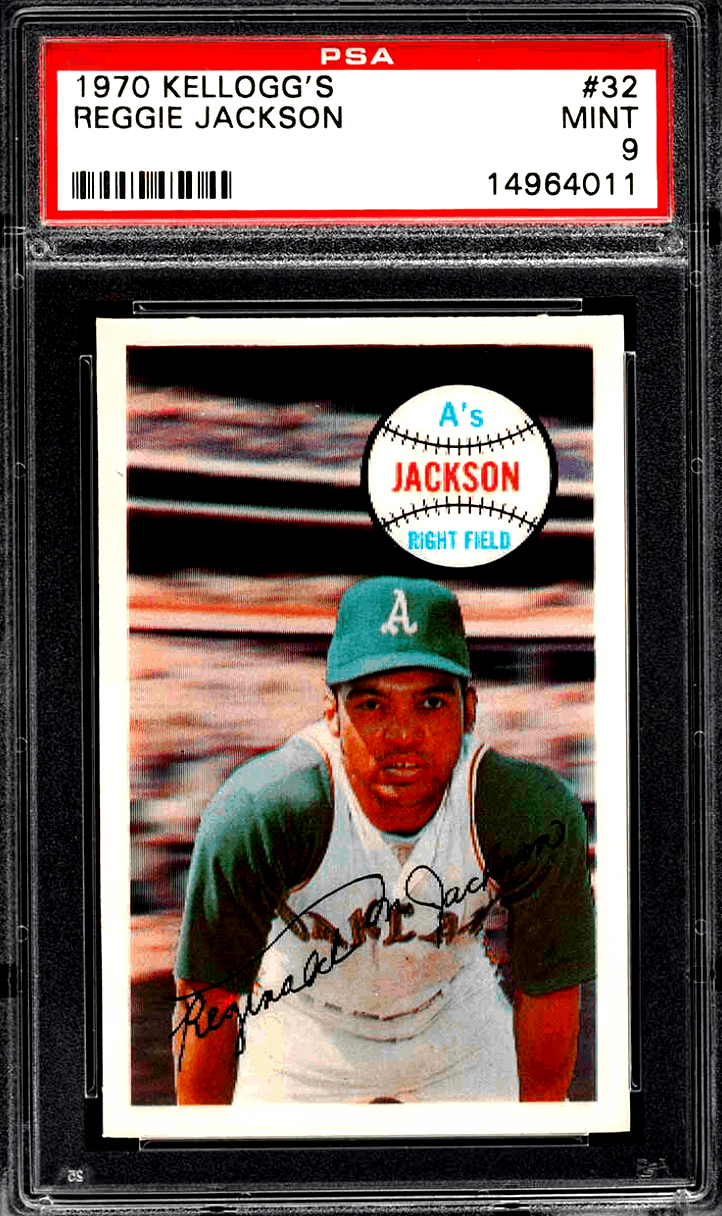 Coming a year after his RC, the 1970 Kellogg’s card has a large shot of Jackson with his hands on his knees. There’s still no classic Yankees uniform, while he was yet to find his preferred look of glasses and mustache in the Kellogg’s release.

A set of 75 cards that were produced by the cereal giant in their first full set, they feature a facsimile copy of Jackson’s signature across the front, while he’s wearing the same Oakland A’s kit seen in his RC above. It also has a fun 3D effect which helps the set to stand out amongst the hundreds of Jackson cards on offer.

He might have missed out on an AL All-star award that year, but it’s an affordable early card that sells for a fraction of the price of the RC. For the best investment pieces, it’s advisable to look at PSA 10’s only, as even 9’s will go for under $50. 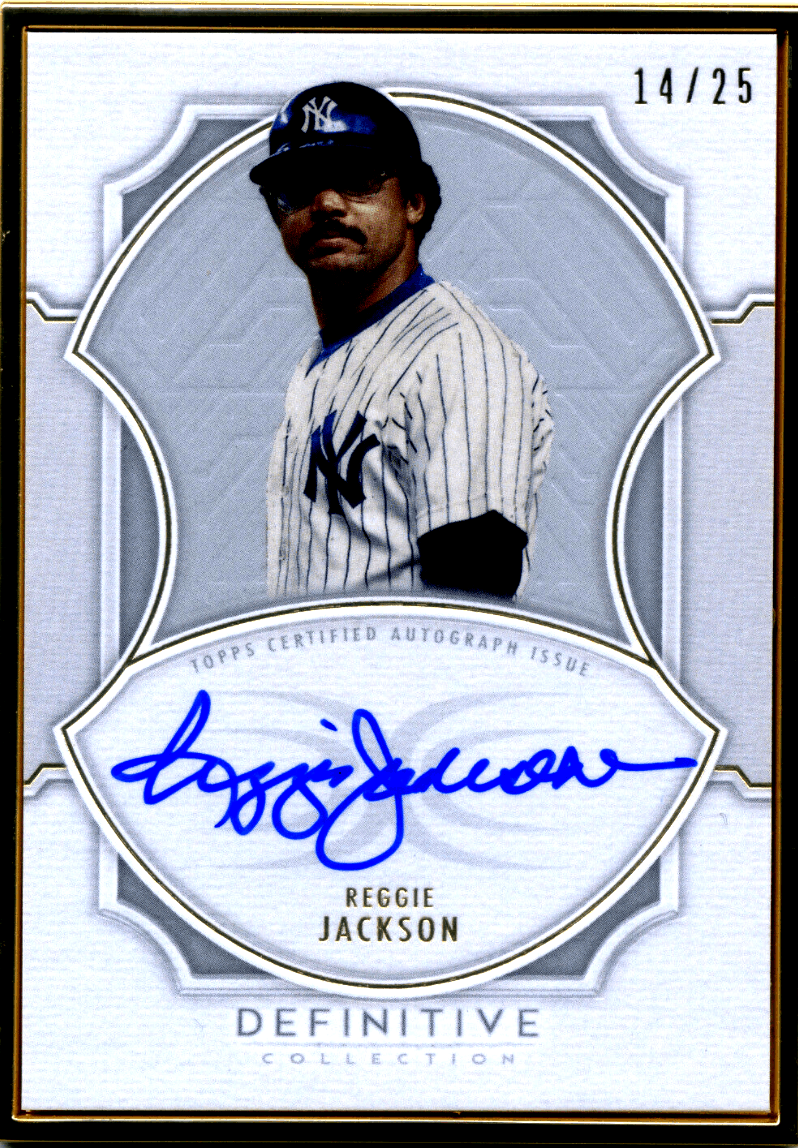 Fast forward half a decade to one of the newest releases, and you’ll find his 2020 Topps Definitive Autograph Relics in a small subset of just 51 cards. Each is serial numbered, with only 25 copies of Jackson’s card to be found. Rarity is always a good thing from an investment perspective.

The Relic is a piece of game-used memorabilia, while there’s an on-card auto located at the bottom. Topps opted for a classic image of Jackson in his Yankees gear, showing the man he became instead of the youngster seen in his earlier releases.

As one of the newest cards on the block, it’s not going to match up to Jackson’s Topps RC in terms of value anytime soon. Regardless, it’s a short print, it’s affordable, and there is a trio of parallels which further ramp up the rarity. It’s worth keeping an eye on. 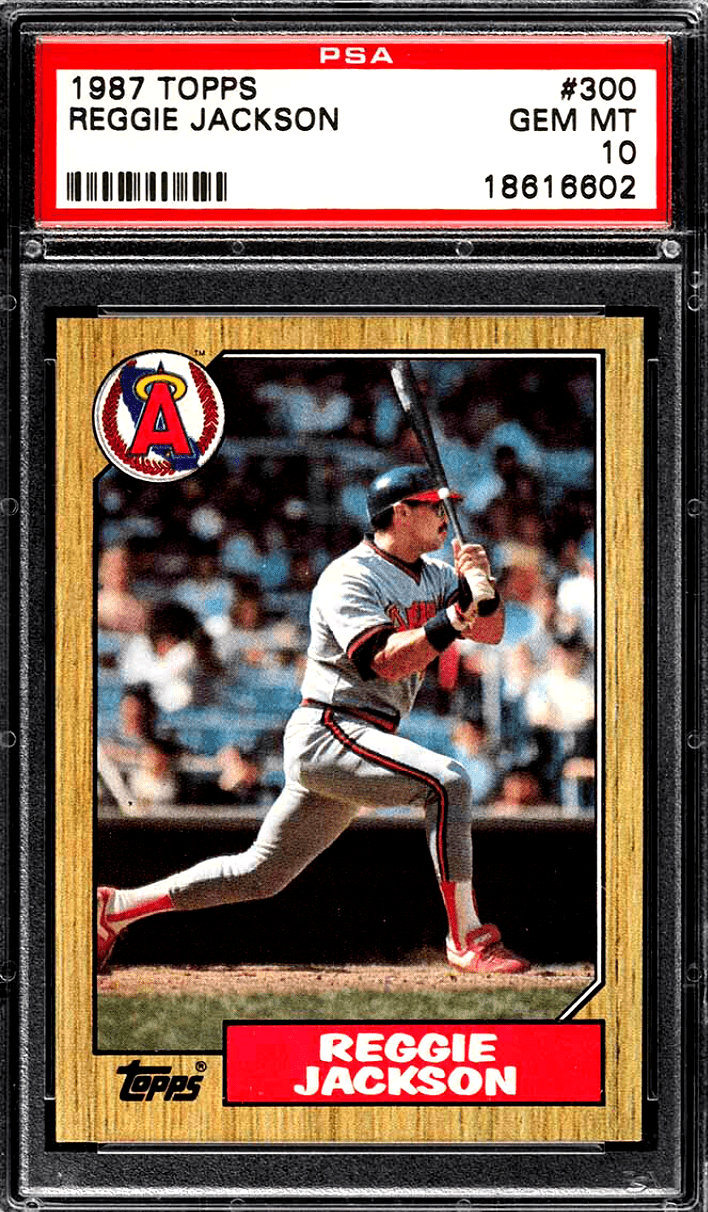 He might be the all-time leader in strikeouts with 2,597, but his rookie cards will always be winners, especially considering his relationship with Upper Deck.

For example, UD released a “Find the Reggie” promotion which inserted 2500 autograph cards into packs of 1990 Upper Deck Baseball High Series packs, showing how highly they valued his name being attached to their sets.

A true icon who led his teams to first place ten times, his cards are worthy of one of the greatest power hitters of all-time. In more recent years, Jackson has been employed by the Yankees in an advisory capacity and is helping to promote racial harmony in the US, having lived through segregation himself in the 1960s. He said;

“We need our different cultures involved, the thoughts, ideas, ideals, different people from different lifestyles and experiences if we’re going to be the best we can be.”

Jackson is important enough to receive numerous card releases to this day, and there’s no sign that his RC prices will drop anytime soon. If anything, his community work has added a new dimension to his media profile in later years.