Ray Allen (7/20/75) is a former basketball player who is widely considered to be one of the best shooters of all time. A ten-time NBA All-Star and a two-time champion, he holds the record for the most 3-point field goals ever with an amazing tally of 2,973.

Ray Allen rookie year was 1996 and after impressing for the Milwaukee Bucks and the Seattle SuperSonics, he finally won an NBA Championship with the Boston Celtics (after the Larry Bird era), and had more championship success with the Miami Heat in 2013.

Here’s everything you need to know about his rookie card options, along with a trio of the best RCs to look out for at auction.

We’ve prepared a list with three of the most popular Ray Allen rookie card options according to recent auction data. 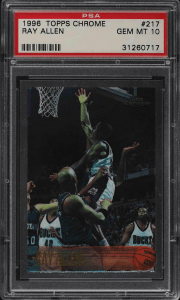 The most valuable Allen rookie card by a significant margin, it comes with a refractor parallel which is one of his rarest options. The action shot shows Allen dominating as he attempts to win the ball. It’s a key rookie from the set, making the card a solid investment choice. The quote on the back reads;

“Characterized as a “wonderful, wonderful human being” by UConn coach Jim Calhoun, Ray brings more to the NBA than just a UPI College Player of the Year tribute”. 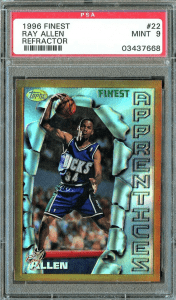 With a three-tier base set, you’ll be able to tell the difference by checking out whether your 1996 Finest has a bronze, silver or gold border. The image shows Allen breaking through the middle with metallic edges ripping away in a stunning design. All three also have refractors, inserted into packs at the following rates;

The reverse lists an ‘Apprentice Fact’;

“Allen’s ability to sparkle in big games augurs well for NBA success. In 1995, he led the entire NCAA Tournament in scoring (24.0 PPG) including a 36-point explosion against eventual-champ UCLA.” 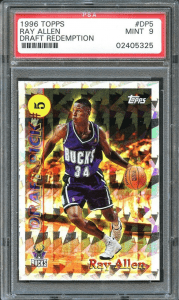 Finally, there’s the Topps Draft Redemption, which is another shiny, rare Allen RC option. The multi-colored border is prone to chipping and highlights any flaws, which goes some way to explaining a high price tag for pristine copies. You’ll find the following quote on the back;

“As the 1996 NBA Draft approached, UConn Coach Jim Calhoun was telling reporters that Ray Allen was “not only a delight to watch, but a delight to coach because he has no ego and just… wants to help us win basketball games.” That was an accurate summation, as he became an instant Bucks starter.”

While they haven’t exactly set the world alight, the rarer Ray Allen cards still hold a decent price in comparison to other mid 90’s basketball players.

Consider the 1996 Finest, or the Topps Chrome. Gem mint versions of Allen’s rookie cards are hard to come by, they’ll always sell for good money, and there are different versions and parallels which make them even more attractive for the majority of collectors.

For example, a gem mint edition of the 1996 Topps Chrome recently sold for just under $430 at auction. The refractor parallel which is significantly rarer, is worth an estimated $2,750 for a PSA 10. A rare gold PSA 10 graded version of the Finest attracted 32 bids and a fee of $387.75, making it a solid alternative to the Topps Chrome at the high end.

Lower-rated versions are hardly worth anything in comparison, which does allow for entry-level investments. Ideally, it’s worth looking out for the various parallels and rare inserts we’ve mentioned above, although they’re definitely going to be more expensive.

In comparison, the majority of his rookie cards are cheap, with lots of options that work to dilute the overall appeal and value to some extent.

Allen has a large list of rookie cards that hail from 1996;

Allen has a wide range of RCs from 1996, a popular year that also saw the release of Steve Nash and Kobe Bryant’s first NBA cards. He might not be as in-demand as the likes of Kobe, but Allen’s cards are still a decent investment depending on the grade and the amount they cost to procure.

The prolific shooter is never likely to match the key duo from 1996, but as a two-time NBA champion (2008, 2013) with the Boston Celtics and the Miami Heat respectively, he’s one of the top players of his era. The majority of his standing records are unlikely to be matched anytime soon, although numbers only make up one part of the allure for collectors.

If anything, the majority of his rookie cards are reasonably underpriced, especially as he was inducted into the Hall of Fame in 2018.

Time and nostalgia will work to allow Allen’s card to rise slowly in due course, and we’d opt for the Topps Chrome if possible due to the popularity of the brand and the rarity of the Refractor.