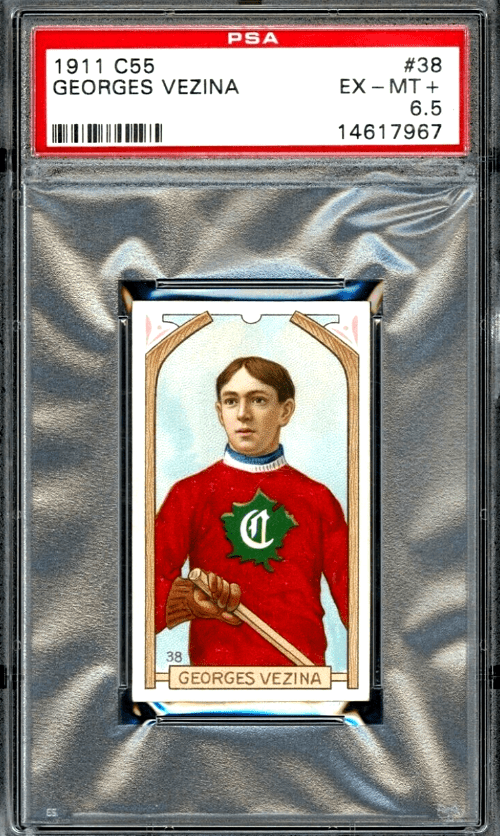 With over 100 years of history, the collectible hockey hobby hosts a range of valuable cards that have been released throughout the years. It’s fair to say that the majority of hockey cards are worthless, but there are a number of hidden gems that are worth big money in 2020.

Here’s everything you need to know about five of the rarest hockey cards of all-time, including lots of info about the player, and how their rarest card managed to make it onto the list.

5 of the Rarest Hockey Cards of All-Time

The rarest cards generally involve the best players, or they have an interesting story attached. As such, the list is packed full of RCs, while some are over a century old!

Most of the cards are rare anyway, but we’ll also be looking at the highest PSA grades that are available, which always raises prices and scarcity significantly. Some don’t even have a gem mint version available, while there are lots of forgeries if you’re looking at older sets, so be careful.

We’ve listed the cards in order of their year of release rather than importance, and we’re going to start with a legendary goaltender whose card was released in the first-ever hockey set to be produced. 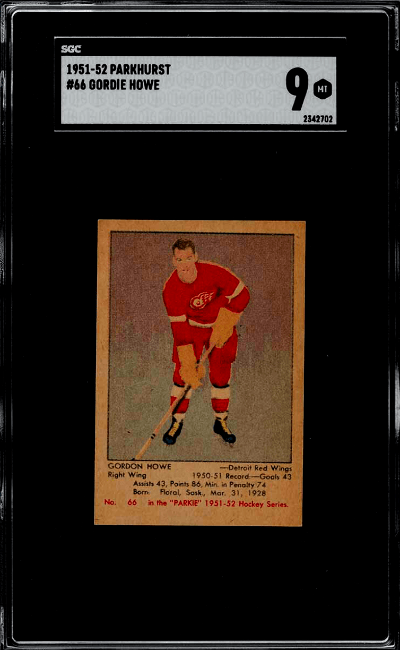 The inaugural recipient of the NHL Lifetime Achievement Award in 2008, Gordie Howe ended his illustrious career with 801 goals, 1049 assists, and 1850 total points, which were all records at the time. His first 25 seasons were spent with the Detroit Red Wings, where he won the Stanley Cup four times and won six Hart Trophies. He’s the only player to have competed in the NHL in five different decades, which is literally ridiculous. Howe passed away in 2016.

The ‘51 Parkhurst set was produced by the Toronto-based manufacturer for the first time since the end of World War II, with Howe’s card being the key. It’s rare not just because of the age or Howe’s achievements. The card stock is inferior, while the original sheets were stacked and cut all at once with a guillotine, leading to poor edging. They were also randomized using a cement mixer, so it’s a wonder that any managed to make it out in one piece. 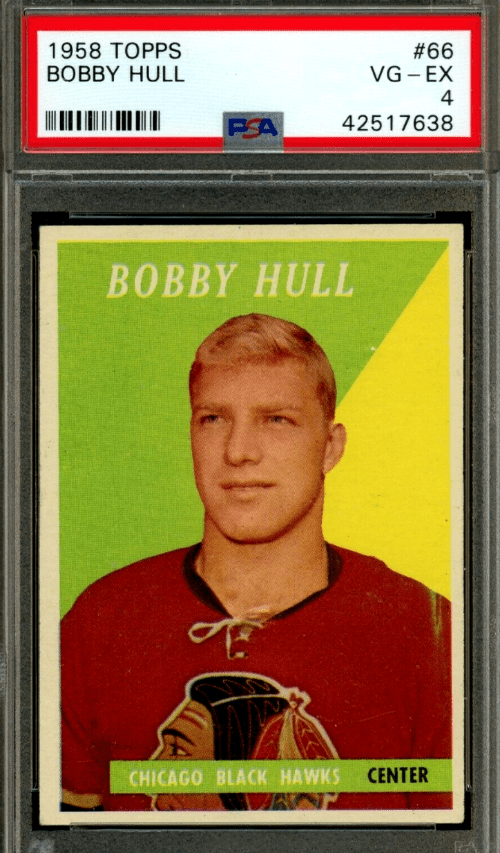 Bobby Hull won the Hart Memorial Trophy twice and the Art Ross Trophy three times, along with helping the Black Hawks to win the Stanley Cup in 1961. Seen as one of the greatest players of his era, he’s also known for the ‘Bobby Hull rule’, which saw players banned from curving their hockey sticks beyond specified regulations.

We’re looking at the ‘58 Topps. The reason for the rarity is due to Hull’s version being the last in the 66 card set. This means it was positioned in the corner, so it was prone to damage and poor centering. A colorful card with a green and yellow background, the player is pictured in a strong profile shot.

A man who needs no introduction for anyone with even a passing interest in hockey, Wayne Gretzky rookie cards is widely considered to be the GOAT of hockey cards. By the time he retired in ‘99, he held 61 NHL records: 40 regular-season records, 15 playoff records, and 6 All-Star records. From starring in video games to being a former part-owner and head coach of the Phoenix Coyotes, he’s done it all over the years.

The final card to make our list is also the most valuable hockey card of all-time. Produced by O-Pee-Chee, Topps’ Canadian counterpart, the set is known for its low-quality card stock, which translates to fewer gem mint versions today. A simple card featuring Gretzky on the ice, only two PSA 10 grades have ever been identified. A copy sold for $465,000 in 2016, being picked up by an anonymous buyer.

Goaltender Georges Vezina played for 15 seasons with the Montreal Canadiens, helping the team to win the Stanley Cup in 1916 and 1924, and reached the Finals three more times. Ever present in the side from 1910 to 1925, he left a game early due to illness in what proved to be his final season. Vezina was diagnosed with tuberculosis and died in March 1926.

As the first hockey set ever to be produced, the 1910 and 1911 Imperial Tobacco cards are always popular with collectors. You might have guessed that it’s considered to be Vezina’s RC, while it features an image that wouldn’t look out of place on a 1600’s tapestry. Unlike many others, Vezina was taken away from the game in his prime, so there weren’t many collectible options produced in later years. 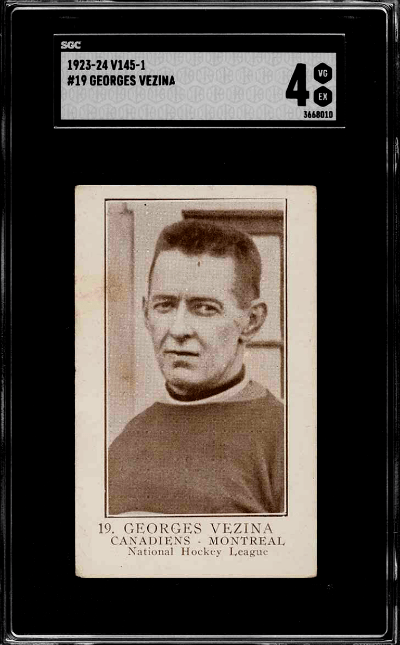 Bert Corbeau was a defenceman who played for the Montreal Canadiens, Hamilton Tigers, Toronto St. Pats, and Toronto Maple Leafs during a 10-year career in the NHL. Corbeau was also a member of the Canadiens’ first Stanley Cup championship team in 1916.

Featuring a host of greats such as King Clancy, Aurele Joliat, and Howie Morenz, the V145-1 William Paterson set was a forty-card promotional release, although it’s not clear who actually produced them. They’re most likely to have been made by the William Paterson Company, commonly misspelled with two t’s. The Canadian set has nothing on the back, and there’s a simple black and white profile shot of Corbeau on the front, along with team info and his name.

Corbeau’s card makes the list as it’s rumored that Paterson offered a pair of skates to anyone who was able to complete the forty-card set. In order to limit how many they gave out, they drastically lowered the circulation of Corbeau’s card. It’s coming up to its 100th year, and it was one of the first cards that were rare by design.