When I was a kid, there were only 151 Pokémon, and the Charizard card was king. Nobody knew how to play the game, but he had one of the highest attacks (100), a massive 120 HP, and a tremendously shiny background. Simpler times and the most expensive Pokemon cards were at the most $20.

As it turns out, many of the rarest cards had already been released in Japan by then, available to a select few from the region. The Charizard is still highly coveted, with a copy selling for $369,000 in December 2020.

Here’s a rundown with seven of the most exciting and scarce Pokemon cards, along with investment advice for the long term if you manage to add one to your collection.

We’ve considered everything from pricing to print numbers when coming up with this list of the rarest Pokémon cards ever. Many were initially given out as prizes for winning tournaments or were released as a rare promo option. 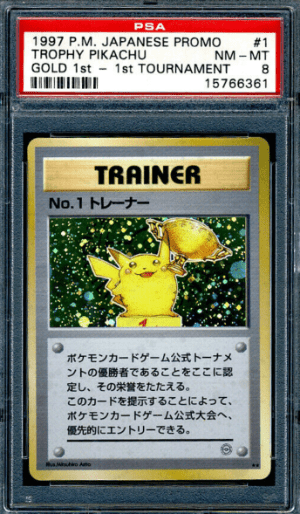 The first card to make a list came out in 1997. The top three finishers in their respective divisions at the first official Pokémon tournament in Japan were awarded limited edition Pikachu cards for their standout performances in the form of a Trainer cards. Aside from ‘No.1’ text at the top, the card is entirely Japanese, and Pikachu holds a large gold cup.

As only four of each of the first-, second-, and third-place cards were reportedly distributed, it’s insanely rare and has to be seen as one of the Holy Grails of the hobby.

This promo card was released in Japan and made available as a prize card through the “Tamamushi University Hyper Test” campaign held in June 1998.

‘The campaign was publicized in Shogakukan’s magazines for primary-school children in the form of a series of tests in which participants could complete and send back to Shogakukan within a limited period.’

Featuring Magikarp, the most useless original Pokémon, there’s no English version, and the card had 1,000 copies for “intended distribution,” according to an early-print promotional image in a magazine.

1000 copies might sound like a low amount, but it pales compared to the print run seen with the 1998 Pokémon Illustrator.

The card features artwork by Pikachu’s creator Atsuko Nishida and was only given away to the winners of an illustration contest. There were just 39 copies produced, and it follows the same design as a Trainer card, with Japanese text found at the bottom. Pikachu is joined by Charmander on the front in a fabulous shiny image. Given the age and the rarity, it’s another ‘98 Pokémon card that is going to be tempting for any serious collector.

Another tournament prize, the 1998 Kangaskhan Parent & Child promo card was given to competitors of a Tag Team Battle, which consisted of a tournament where an adult and their child had to go on the same team and battle other parents/child teams.

“As you might have guessed the 1998 Kangaskhan Parent & Child promo card features an image of Kangaskhan, with a baby in the kangaroo sack”

This card is one of the few promotional cards to feature the original Pocket Monsters Trading Card Game logo as a set symbol. This symbol is usually reserved for only the rarest of Pokémon cards, helping it to stand out from the crowd.

Okay, so it’s not the rarest, but it will cost you a ridiculous amount if you’re aiming to add one to your collection.

I mentioned that Charizard was king way back in 1998. So much so that local shops near me would open packs themselves, selling the shiny cards as singles. I remember heading to the counter and seeing the first edition Charizard card in a sleeve advertised for $150. 23 years on (yes, I’m getting old), and Logan Paul made the news when he bought a PSA 10 copy for $150,000.

“Confirming that the Charizard craze is not slowing down was an additional sale through PWCC on eBay, which also broke the USD 300,000 threshold. This card belonged to a collector who bought it in 2009 for $700 USD, selling it a few days ago for USD 350,000.”

Supposedly, fewer than 50 copies of the 1999 Tropical Mega Battle Exeggutor card, so it’s easy to see how it makes it onto the list. It was given to participants of the first Tropical Mega Battle, held at the Hilton Hawaiian Village in Honolulu, Hawaii, in 1999.

It’s notable for being one of the few cards with Japanese text with English translations below it, while it was later reprinted on glossy card stock in Japan. You’ll be looking out for the non-glossy version.

The most recent card to make a list is the 2010 Master’s Key. Based on the distribution at the finals from that year, 36 copies of this card were awarded, making it another hyper-rare Japanese option.

It features the Master’s Key and comes with a gold foil stamp below the card text which reads “Pokémon World Championship 2010 Japan National Tournament prize card”.

They were originally found in a protective case, red for the TCG, and blue for winners of the DS tournament. They’re worth more in the original case.

I predominantly write about sports here at Gold Card Auctions, but there’s no denying the collectibility of Pokémon cards in recent years.

Considering the current prices, any investor would be happy to find a shiny first edition Pokémon card lying around. There’s certainly profit to be made, depending on how long you’re willing to hold onto the cards for.

“As recent Charizard sales have shown, there’s a massive market of adults who know exactly how popular Pokémon is and are willing to pay top dollar to add the rarest cards to their collection.”

Prices are a little higher than you might expect, but that’s because there are so many investors, collectors, and fans of the series. A generation of adults grew up consuming games, anime, and collecting cards. The constant stream of media (and ever-expanding list of Pokémon) has helped to capture new audiences in the meantime, and they’re likely to want the rarest cards too, when they’ve grown up.

How much will a first-edition Charizard be worth by then? Comment below!

Which Pokemon cards are worth money?

Rare Polemobn Cards with high PSA grades are worth the most money. For example the PIKACHU ILLUSTRATOR PSA 9 is considered the MOST VALUABLE POKEMON CARD EVER.

How do I know if my Pokemon cards are valuable?

You know your Pokemom cards are valuable if they are graded and rare. Email us at value@goldcardauctions.com to obtain an estimated value on your Pokemon card.

What are the 10 most valuable Pokemon cards?