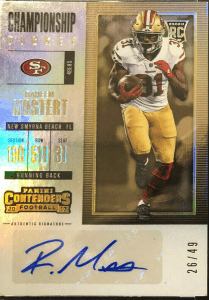 Raheem Mostert (04/09/92) is a running back for the San Francisco 49ers. He was undrafted in 2015 and began his career with the Eagles. Mostert was cut by six teams before 2017, including the Jets, the Bears, the Browns, and the Ravens.

Against all odds, he begins 2020 as the only player in NFL history with 200+ rushing yards & 4+ rushing touchdowns in a playoff game, having sparkled for the 49ers as he repaid the faith they showed in him.

We’ve listed a trio of his best rookie cards, as well as an investment report heading into 2020. 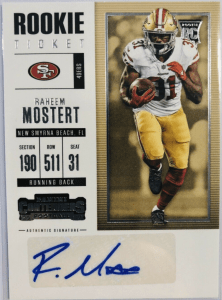 After a slow start, 2017 is when Mostert finally got his first rookie card. The Panini Contenders edition is his most popular option, with good versions regularly selling for over $200 at auction.

It’s a stylish card with a crisp white and gold background, along with a signature in blue along the bottom. There’s an image of the player in motion on the right-hand side, along with an RC logo slightly hidden behind him in the top corner.

On the reverse, you’ll find the card number and a couple of preseason stats from 2017. It also notes that he won gold at the 2014 Big Ten Championships and that his first name is actually “Dominique”.

A shiny edition of the card discussed above, the Championship Ticket is similar in almost every other respect. Aside from the refractor, it’s numbered to 49, and you’ll see the different names at the top.

Otherwise, it’s pretty much the same, and that includes the signature and the player information found on the back. An ungraded version recently sold for $105, which is a decent price for such a rare rookie card.

The final card in our trio is his Playoff Ticket. It’s a striking option, although the foil will make it hard to find a gem mint copy. Another variant to make up Mostert’s trio of rookie cards, it has the same image and info found in the other two on this list.

Numbered to 99, it’s a great option if you want a rarer card without having to go all out for the Championship Ticket. A decent version recently sold for just over $100 at auction.

Mostert exploded onto the scene with a number of record-breaking appearances for the 49ers, and his rookie cards have recently started to climb in price to reflect his new stature. He was always relentlessly speedy, but he’s moved on to become one of the most exciting players in the NFL right now.

He’s also well aware of what it took to get there. According to the man himself; “I did have a lot of doubters and naysayers. Now I get to actually tell them, ‘Look where I’m at now.’ I never gave up on my dreams.”

Those aren’t the words of a man who plans on giving up anytime soon, although it’s unclear how long he can keep up the form of his life. However, if he does trip at the last hurdle, his card prices are likely to plummet.