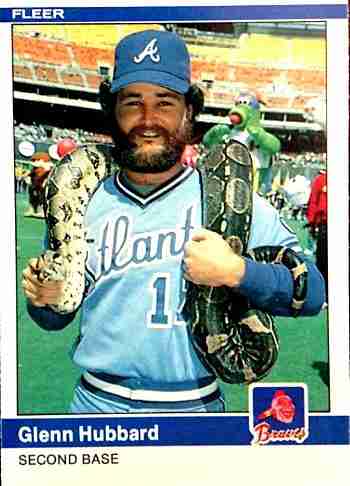 There is a rich history of collecting cards from America’s pastime.

Since the first baseball card was ever produced, baseball cards have been predisposed to bizarre and laughable photographs that have somehow materialized on players’ cards throughout the years.

The Top 10 Quirkiest Baseball Cards of All Time

With that said, we present the top 10 quirkiest baseball cards of all time, in order of release.

One of the most fascinating baseball cards ever printed emerged from 1984 Fleer that features Glenn Hubbard, the Atlanta Braves’ second basemen (1978-1987), with a shaggy beard, which raised eyebrows at the time, the Phillie Phanatic in the backdrop, and an enormous eight-foot boa constrictor wrapped around his shoulders.

Hubbard approached the man caring for the snake and found a photographer to take a photograph. It so happens that the photographer on the field was a freelance photographer for Fleer, who eventually used the picture for his 1984 Fleer baseball card.

Unaware until Spring Training the following season when a fan asked Hubbard to autograph his card, Hubbard was shocked to find out what had transpired. Initially disgruntled since he didn’t give permission and wanted to be viewed as a professional baseball player, Hubbard has lightened up about his iconic piece of cardboard over the years.

Hubbard hit 70 home runs, logged 448 RBIs, and had a lifetime .244 batting average across 12 major league seasons, earning one All-Star Game appearance. Although his offensive numbers don’t jump off the page, Hubbard was an incredible defensive weapon for the Braves, turning 975 double plays (32nd all-time), producing a lifetime .983 fielding percentage, and recording the highest range factor/9 inning for a second baseman of all-time.

Paying homage to his roots, Glenn Hubbard served as the Atlanta Braves 1st base coach from 1999 until 2010, before being hired by the Kansas City Royals as a bench coach for the Lexington Legends, now in the Atlantic League of Professional Baseball.

Three decades after his iconic Fleer baseball card, the Lexington Legends hosted a bobblehead giveaway at the stadium, featuring Glenn Hubbard wearing a Lexington Legends uniform, his shaggy beard, and of course, a boa constrictor, named Bam Bam, wrapped around his neck. Glenn Hubbard’s 1984 Fleer baseball card can be found on eBay for around $10, while his rare bobblehead conveys $125.

4 Rookie Cards That Could Double Your Money In 2022

Another intriguing piece of cardboard that leaves collectors in astonishment is none other than Chicago Cubs outfielder Jay Johnstone sporting an umbrella hat that advertises Budweiser in his 1984 Fleer baseball card, fittingly the same set as Glenn Hubbard’s unforeseen boa constrictor card.

It turns out that Johnston’s umbrella hat is dubbed the Brockabrella after the late baseball Hall of Famer Lou Brock famously promoted the invention as a member of the St. Louis Cardinals back in the 1970s.

Like Glenn Hubbard’s account, it was Photo Day at Wrigley Field on a scalding summer afternoon when Johnstone headed into the dugout and grabbed his Brockabrella. Although Johnstone didn’t pose for a photo like Hubbard, a freelance photographer from Fleer, undoubtedly the same photographer as Hubbard, captured a photograph of Johnston rocking his Brockabrella. Budweiser offered Johnstone a case of beer each summer for being a good sport.

Throughout his 20-year MLB career, Johnstone played for eight major league clubs, totaling 102 home runs, recording 531 RBIs, posted a .267 batting average, and captured two World Series. Nevertheless, Johnstone will be famously remembered for his unconventional antics, none more renowned than his Brockabrella 1984 Fleer baseball card, which you can acquire for roughly $5 on eBay.

Hatcher acquired the Mizuno mitt at a promotional event during spring training, requesting a photographer to capture a photo of him. However, Hatcher was unaware the image would be appointed for his 1986 Fleer baseball card.

Like Johnstone, Hatcher was considered one of the most eccentric players of his time, and his 1986 Fleer card embodied his true personality. Although he never fully retained possession, Hatcher hauled the cumbersome Mizuno mitt around throughout his career.

Yet another Fleer photographer story, a Fleer cameraman proposed a deal to Flannery, offering him a Sauritch surfboard, which was handcrafted by his brother, in exchange for photographing him holding the surfboard, and of course, Flannery accepted.

Although Flannery’s stats were subpar, showcasing a 162-game average of two home runs, 35 RBIs, and a .255 batting average, Flannery was a fan favorite and certainly put his Sauritch surfboard to good use in San Diego’s commendable swells. Should you wish to grasp your hands on a 1988 Fleer Tim Flannery card, it will cost you a mere $0.99.

Upper Deck apparently felt left out of the recent trend of outrageous baseball cards, issuing Gary Pettis’ 1989 Upper Deck card holding what appears to be a baseball trading card of Pettis himself.

It turns out that Pettis was actually holding Wally Joyner’s baseball card, who were former teammates with the then-California Angels in the 1986 and 1987 MLB seasons.

Ironically, this isn’t the first time Pettis has succumbed to baseball card satire, as his 1985 Topps card depicts his older brother.

Drafted by the then-California Angels in the 6th round of the 1979 MLB Draft, Pettis played six seasons with the club before playing three years for the Detroit Tigers, two for the Texas Rangers, and one with the San Diego Padres.

Pettis tallied 21 home runs, 259 RBIs, and was a lifetime .236 hitter, who was more known for his speed, swiping 354 career bases, and his glove, achieving five Gold Gloves as a center fielder. Though, collectors will consistently recall Pettis for his mind-bending 1989 Upper Deck card, which can be bought on eBay for $0.99.

One of the most unconventional cards of all time belongs to the late Eric Show, the long-time San Diego Padres starting pitcher. In Topps’ debut of Stadium Club back in 1991, Show was photographed in a hammock playing his guitar in his final MLB season with the Oakland Athletics.

Show’s 1991 Topps Stadium Club card pays homage to his passions other than baseball, as Show was a musician who owned a music store and never went on a team road trip without his guitar. Drafted in the 18th round of the 1978 MLB Draft, Show had a strong rookie season, going 10-6, with a 2.64 ERA and 1.10 WHIP, recording 88 strikeouts in 150 innings.

Show’s career, though, was overshadowed by allowing Pete Rose’s historic 4,192nd career hit, surpassing the legendary Ty Cobb, for most hits in Major League Baseball history. Across 309 games played and 230 starts with the San Diego Padres, Show accumulated 100 wins, the most in franchise history.

As one of the most bizarre baseball cards ever produced, hobbyists can add Show’s 1991 Topps Stadium card to their collection for $0.99.

Bill Pecota’s 1991 Fleer baseball card is the epitome of a swing and a miss, both literally and figuratively. Yet again, Fleer grabs the headlines, offering another nonsensical baseball card. Why Fleer published Kansas City Royals super-utility player Bill Pecota swinging and missing on his baseball card makes no logical sense at first glance.

However, Bill Pecota, or should I say PECOTA, is the moniker used by FiveThirtyEight’s crackerjack (pun intended) statistician Nate Silver in Baseball Prospectus to project baseball player and team performance.

Although PECOTA stands for “Player Empirical Comparison and Optimization Test Algorithm,” what more suitable way to represent Baseball Prospectus’ sabermetric system to project performance than one of the most average baseball players of all time in Kansas City Royals, Bill Pecota, who hit 22 home runs, registered 148 RBIs, and averaged .249 throughout his nine-year Major League Baseball career. Should you be interested in Bill Pecota’s 1991 Fleer card that illustrates Fleer’s mediocrity, it’s obtainable for just $0.99 on eBay.

Leon Joseph “Bip” Roberts played for six major league clubs in his 12-year MLB career, though most recognized for his seven seasons with the San Diego Padres. While some recall Bip for his speed (264 career stolen bases) and batting average (.294), others remember him sporting a sombrero on his 1996 Score Dugout card. The San Diego Padres hosted a Mexican Heritage Day at the ballpark, and Bip asked a performer if he could borrow their sombrero to salsa dance. Bip headed back to the dugout afterward, unknowingly still wearing the sombrero, when a photographer took the photo, leading to his memorable baseball card that’s still spoken about today. Should you be inclined to get your hands on Bip Robert’s 1996 Score Dugout baseball card, often called Bip’s Sombrero, it is currently selling on eBay for $4.95.

Barry Larkin did it all for the Cincinnati Reds over his incredible 19-year MLB Hall of Fame career. Larkin attained 12 All-Star Game appearances, nine Silver Slugger awards, three Gold Gloves, an MVP award, and a 1990 World Series Champion. Of all the incredible accomplishments Larkin achieved, nobody can overlook his 1996 Pinnacle Summit card, performing a priceless resistance band sprint.

Although the Hall of Famer’s baseball card is laughable, Larkin’s resistance band sprint training appears to have been successful, swiping 379 career stolen bases, ranked 90th in MLB history. In the event you want to add Barry Larkin’s card from 1996 Pinnacle Summit to your collection, it will cost you about $1 on eBay.

Last but certainly not least, we have Skip Schumaker’s 2012 Topps SP baseball card, the most recent quirky card on the list, showcasing a single cleat in the batter’s box, along with a grey squirrel.

During Game 3 of the 2011 National League Division Series on October 4, 2011, featuring the Philadelphia Phillies and the St. Louis Cardinals, the game was paused when a grey squirrel was spotted in the outfield.

The following game, Skip Schumaker was in the batter’s box awaiting a pitch from Roy Oswalt when a grey squirrel again emerged on the diamond, approaching Schumaker standing at home plate when the photo was captured.

After the grey squirrel ran across home plate, it leaped into the sold-out crowd at Citizens Bank Park. Dubbed the “Rally Squirrel,” the grey squirrel became a good luck charm for the St. Louis Cardinals, who ultimately won the 2011 World Series.

Throughout his 11-year MLB career, Schumaker was a respectable career .278 hitter with the St. Louis Cardinals, Cincinnati Reds, and Los Angeles Dodgers. Yet, that might be overlooked, as collectors will always reminisce about his Rally Squirrel card. Skip Schumaker’s SP variation is one of the most sought-after cards on the list, currently listed on eBay for $129.99.