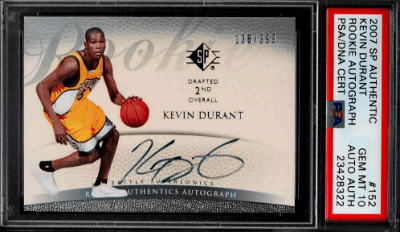 A pro athlete who takes a contractual gamble is said to “bet on themselves”. Some pro athletes have chosen instead to bet on other athletes by investing in sports cards.

It’s possible that sportscard collecting is a way for retired athletes to remain connected to sports once they’re done competing professionally. Others might truly enjoy the hobby, whether their career is still active or they’ve called it quits.

As you’ll see, though, some jocks simply see trading cards as a savvy investment.

Pro Athletes Who Are Betting Big on Sports Cards

The average NFL salary is about a couple million dollars, while typical MLB and NBA athletes earn significantly more.

Athletes who want to make their earnings last, or even grow exponentially, have turned to sports cards as a form of sustainable ROI.

Kevin Durant has earned more than $260 million over the course of his career. He’s likely to rake in significantly more before he retires.

He’s not content with that sum, though, and he’s betting big that income from sports cards will augment his professional earnings.

Durant is a member of an investment group that sunk $40 million into a trading card auction house in 2021. It isn’t Durant’s only foray into sports card investment.

The Slim Reaper and Australian point guard Matthew Dellavedova have put their financial support behind a startup called Stardock.

The company manages ownership rights to cards, holding them on-site so that buyers and sellers don’t have to worry about shipping and receiving cards as they trade hands.

Durant and Delly’s investments were part of a $1.3 million fundraising round for StarStock—a massive sum that reflects the intense passion for all things sports cards.

Evan Mathis played for more than a decade as a guard in the NFL, making multiple Pro Bowl appearances and earning a Super Bowl ring in 2016 as a Denver Bronco.

And yet, even as a member of Pro Football Focus’ 2010s All-Decade Team, Mathis may be an even more accomplished card investor than football player.

Mathis dove deep into card collecting following his retirement in January 2017. He’s said that he spends “all day, every day” buying cards for his collection.

Mathis has a genuine love of sports cards, and we expect that he’ll be a major player in trading circles for the foreseeable future.

Ray Allen made 2,973 three-pointers in his illustrious NBA career (including one of the most iconic shots of all time). He’s hoping to be just as clutch as a trading card shark.

Allen describes in an Instagram post why he and so many other collectors see sports cards as a unique form of investment:

“Trading cards will forever take you back to that moment when you first saw your favorite player stroll down the court. Get you some!”

Could the NBA’s King also be the King of Sports Cards?

James has hinted that he owns “a couple” of 2003-04 LeBron James Upper Deck Exquisite Rookie Patch Autograph cards. No biggie, it’s only sold for a cool $1.8 million.

We’d sure like to know what other gems LeBron has stashed away in his safe.

The evidence for Giannis being a trading card enthusiast is a bit more tenuous than other athletes on this list—but it’s there.

The Greek Freak posted a Tik Tok which showed dozens of NBA trading cards displayed on a table. Each card featured the same player: Giannis Antetokounmpo.

It appears that collecting runs in Giannis’ blood, too, as his brother Thanasis has proudly broadcast a card break in which he pulled a 2013-14 Giannis Panini Prizm RC #290.

Casual sports fans may be asking, “Cassius Who?”

Though he’s by no means a household name, observers might recognize Marsh as the heavily-tatted, lanky defensive end who’s played for the 49ers, Seahawks, and Steelers (among other teams).

Marsh has shared wise nuggets about card investing: “My ultimate advice would be to take care of your investments…If you’re trying to collect, be smart about it and protect your cards.”

Taken with the 24th overall pick in the 2008 NBA Draft, Serge Ibaka has proven to be a high-value player throughout more than a decade of NBA service.

If he listened to Gary Vaynerchuk during their meeting in February 2021, Ibaka will be seeking similar value in the form of trading cards.

Ibaka seemed to soak up Gary Vee’s pitch about sports cards as a high-ceiling investment.

We can’t be certain if Ibaka has pulled the trigger on any cards just yet. With $127 million in career earnings, he would be a heavyweight with substantial purchasing power.

Who knows, he may even acquire his own copy of the 2020-21 Serge Ibaka Panini NBA Hoops card.

Gronk has always been in touch with the cultural zeitgeist, so it’s no surprise that he’s claiming a stake in the trading card craze.

Though he’s taking the digital route, we consider Gronk’s line of NFT trading cards to be a broad endorsement of sports card culture as a whole.

“I always was a big collector of trading cards,” Gronk’s said. “And now it’s super cool to be able to give my fans this opportunity and to be the first athlete out there to have a digital trading card.”

Gronk may be the first athlete to launch his own NFTs, but he certainly won’t be the last.

Dmitri Young will never grace the Hall of Fame, but he played 14 seasons of Major League Baseball and earned more than $52 million during that time.

He’s used those earnings to amass, and eventually sell, an impressive rookie card collection. It’s so well-regarded that it’s been known simply as the Dmitri Young Collection.

Young parted ways with his beloved rookie cards in 2012. Still, the left-handed slugger remains one of the most prolific athlete-collectors in trading card history.

These Athletes Have Brains

Athletes, from superstars like Kevin Durant to role players like Cassius Marsh, have seen the financial promise that sports cards hold. They’re making major bets on the future of trading cards.

From high-dollar personal collections to investments in NFTs and other card-related ventures, these athletes have made trading cards a part of their investment portfolio.

Who said athletes are all brawn and no brains? These jocks are proving that perception false.

If you would like an estimated value of your sports cards please email us at value@goldcardauctions.com and include 2 photos at a minimum.