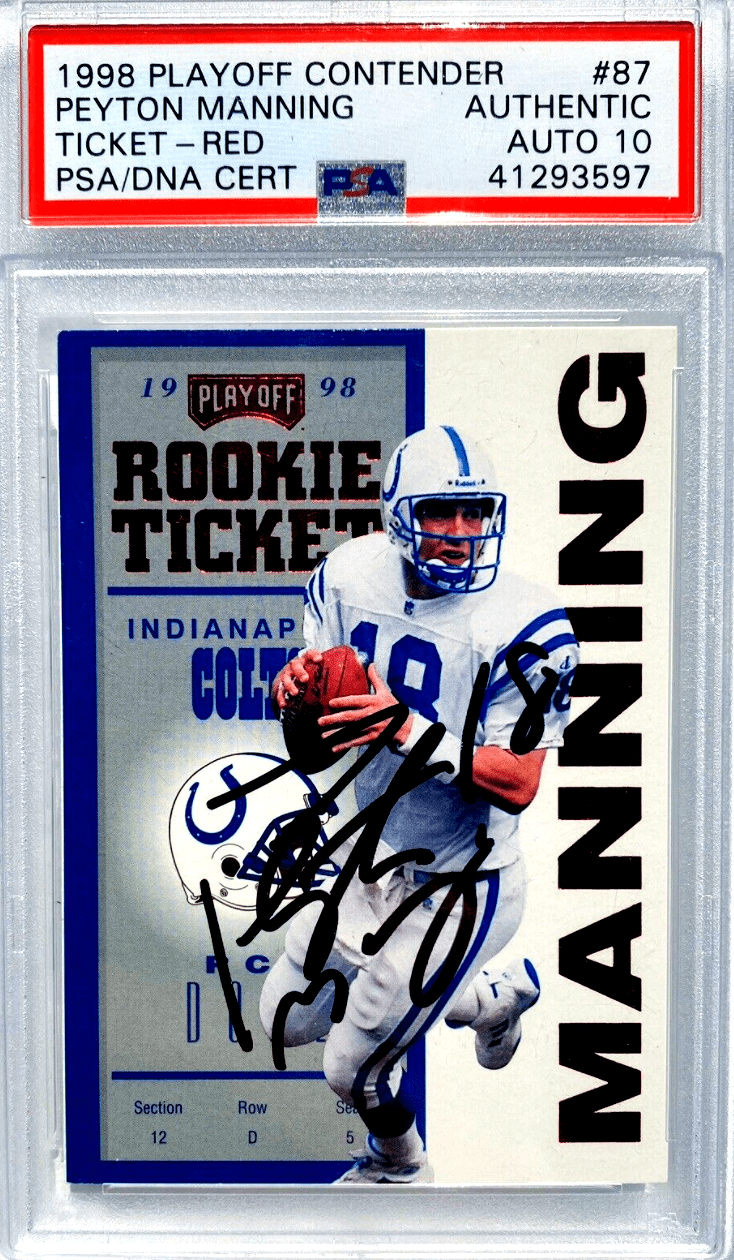 Peyton Manning is one of the best quarterbacks in NFL football history, and the price of his rookie cards reflect that.

Pro Tip: Peyton Manning and Tom Brady Rookie Cards are two of the best investments in the hobby. If you don’t own at least one of these players in your sports card portfolio, please change that ASAP!

Peyton Manning with the Colts

The Colts made the postseason 11 times in 13 years with Manning under center. They also won the team’s first Super Bowl Trophy (Super Bowl XLI) since relocating to Indianapolis in 1984.

Peyton Manning with the Broncos

Manning continued his sterling play with the Denver Broncos. He helped the Broncos win an average of 13 games per season in his four-year stint from 2012 to 2015.

Manning won his second Vince Lombardi Trophy after Denver beat the Carolina Panthers in Super Bowl 50. It was also the Broncos’ third Super Bowl win in franchise history… there are a few Peyton Manning football cards with him in a Broncos jersey that are worth buying (more about that later).

At the end of his stellar NFL career, Manning won five NFL MVP awards, made 14 Pro Bowl appearances, and made it to the Indianapolis Colts Ring of Honor.

Invest in one of the best wideouts of all time: Randy Moss Rookie Cards

He is one of only eight quarterbacks in NFL history to throw seven touchdown passes in a game. For investment purposes, let’s check out the best Peyton Manning rookie sports cards. 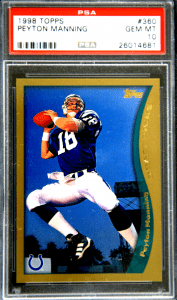 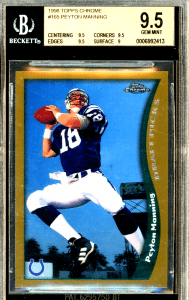 Here are a couple of great options for Manning rookie cards for high-end and your everyday Joe… the Topps Chrome is ideal for investors with deep pockets, while the Peyton Manning Topps rookie card is ideal for standard investors.

Numbered #360 (Topps) and #165 (Topps Chrome), the card shows Manning dropping back to pass in the Colts blue jersey. 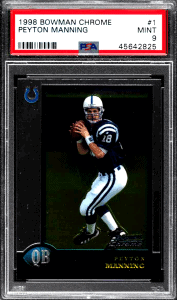 The 1998 Bowman Chrome Manning rookie card is our favorite out of all of his rookie cards and our pick for best ROI over the next 20 years.

A stunning card showing Manning dropping back to pass with a haunting dark grey/black backdrop… we love it! If you are a Manning fanboy and don’t have this card in your collection, rectify that immediately.

#Numbered 1 the back of the card reads “Won the Davey O’Brien Award as the top college QB in 1997, and was Heisman Trophy runner up…Chosen All-SEC three consecutive seasons. 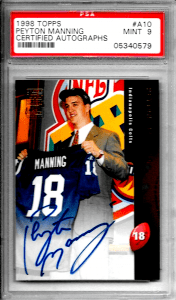 This is the premier rookie card of Peyton Manning, which shows him moments after the Colts drafted him in 1998. The front of the card shows a young, smiling Peyton wearing his draft hat and holding up his No. 18 Colts jersey. The bottom of the card shows his autograph.

The back of the card reads, “In deciding to complete his college career, Peyton got just what he deserved at the University of Tennessee in 1997: His first Southeastern Conference Championship.”

Not into football? Check out the best Kobe Bryant rookie cards and thank us in a few years when your ROI is 50% to 100%

Indeed, this is a gem of a Peyton Manning rookie card – it will cost you roughly $350 to $400. There aren’t too many top-notch cards of Peyton Manning on draft night. This rare commodity is worth your while. 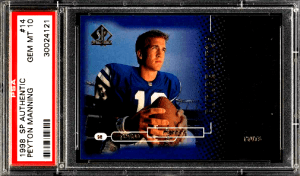 This is one of Manning’s most popular rookie cards to date.

An established sports card brand, an excellent photo, and a serial number join forces to make the 1998 SP Authentic #14 Peyton Manning Colts Rookie Card BGS 9.5 one of the most sought-after in the market.

The front of the card shows Manning scanning the field for an open receiver in his Colts home blue jersey.

The back of the card reads, “A star from the moment he stepped on campus at the U. of Tennessee, Peyton was everything the Vols hoped he would be. An outstanding student, superb quarterback, and gracious hero, Manning now is the foundation the Colts will build upon for years.”

The 1998 Topps Chrome Peyton Manning Refractor Rookie PSA 10 Gem Mint RC has an estimated (and hefty) price tag of $3,500. If you buy this card, you will become one of only 40 people in the world who has it. 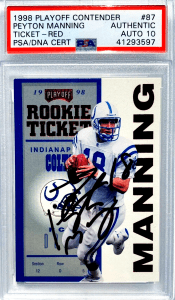 Without a doubt, this is the mother of all Peyton Manning rookie cards. As the card’s name implies, the left panel shows Manning’s rookie card with the Colts logo and helmet.

It also shows Manning in his road white jersey and his autograph at the bottom. The back of the card shows a photo of Manning and his college stats with the Volunteers. Brace yourself.

One of these will cost you approximately $75,000 – the equivalent of one or two years’ worth of your salary.

Will you get a huge ROI on this one? 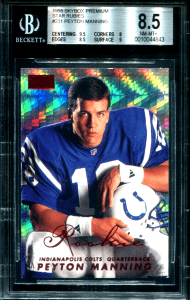 Here is the top Peyton Manning RCs in terms of value… with #1 being the most expensive.

If you are buying a Manning rookie card but would like a second opinion, please email us at advice@goldcardauctions.com before making the purchase.

Peyton Manning has solidified his status as one of the greatest quarterbacks in the history of the NFL.

He should become a first-ballot Pro Football Hall of Famer in the next few years.

Truly, “The Sheriff” is one of football’s biggest icons.