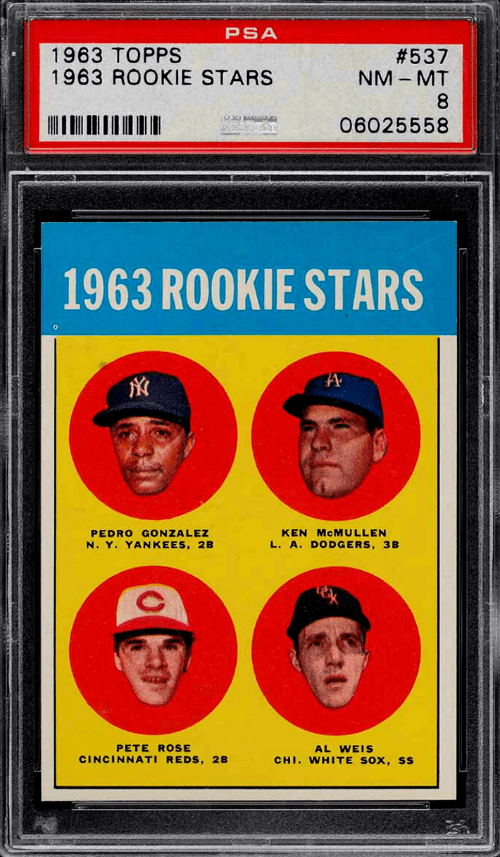 Rose has three World Series rings, was named as the NL Rookie of the Year in ‘63, and made 17 All-Star appearances in a record five positions. He later went on to coach the Cincinnati Reds, until he voluntarily accepted a permanent place on baseball’s ineligible list in 1989 following allegations about gambling.

Here’s everything you need to know about the top five Pete Rose cards, as well as investment advice if you’re thinking about picking up a couple in the future.

The majority of older Rose cards were released by Topps, although he hasn’t featured on one of their baseball cards since 1989. We’ll begin with one of the earliest options, which also happens to be the most expensive overall.

Considered to be the definitive Pete Rose RC, the ‘63 Topps features an image of Rose, along with Ken McMullen, Pedro Gonzalez, and Al Weis. Their heads have been lopped off and stuck onto red circles, while there are a solid yellow background and a blue section at the bottom that notes that the players are ‘1963 Rookie Stars’.

|Trending: Rookie Cards That Could Double Your Money

As it’s an extremely popular card, there are large numbers of counterfeits on the market, so pay special attention if you find one selling for a price that seems too good to be true. We’d advise looking at graded cards only, especially when looking at expensive vintage options such as this one. 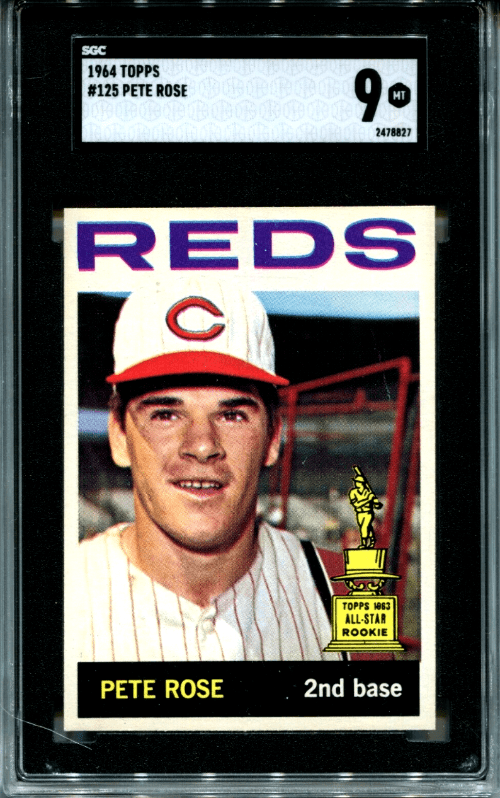 On the subject of expensive vintage options, the next card on the list comes in just one year later, but it’s decidedly more affordable than the RC above unless you’re looking at mint versions.

The ‘64 Topps has a strong profile shot of Rose, smiling at the camera in a release that honors his Rookie of the Year win. A large All-Star Rookie Cup badge is featured on the front of the card, and while it’s not as exciting as his earlier option, it’s still fairly popular with vintage collectors. 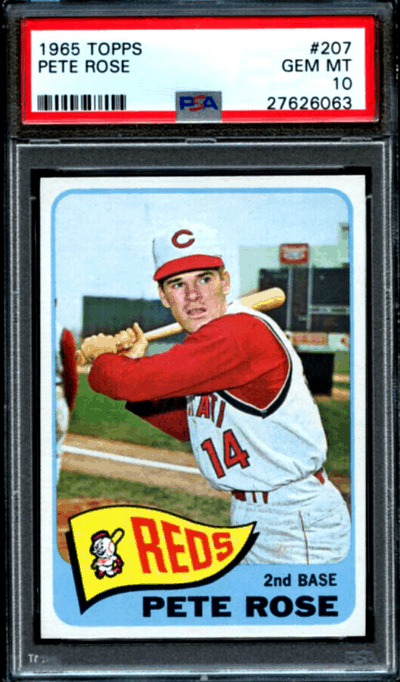 Skip ahead another year, and there’s a great entry-level option to be found. The 1965 Topps features a posed shot of Rose with his bat at the ready, alongside a stadium background and a simple blue border design.

His name and position are listed in black text near the bottom, set against a blue backdrop. It’s an iconic set in the history of the hobby, and Rose is one of the key players to look out for. 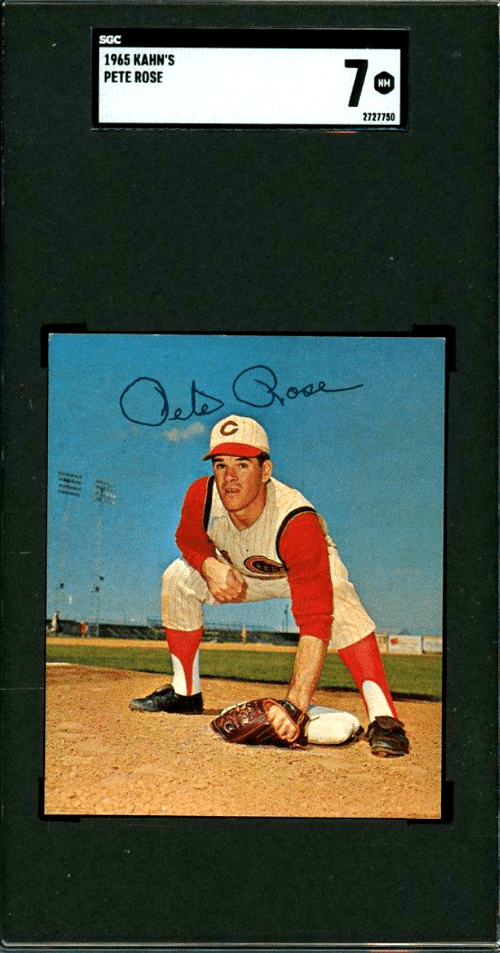 Released as part of the limited 1965 Kahn’s Wieners baseball set, you’d hardly be able to tell this was a collectible if not for the player info found on the reverse. It features a great posed shot of Rose with one hand on the ground, crouched as he looks at the camera.

It was the first time that Kahn printed full-color cards, and there’s also a copy of his autograph found across the middle. 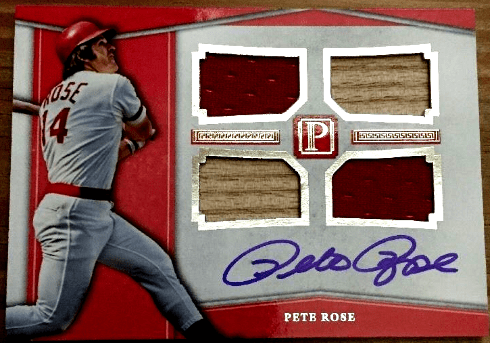 If you’re in the mood for something a bit more contemporary, this card is from the 2016 Panini Pantheon set. It celebrates retired MLB stars like Rose, with a number of high-end options to choose from.

The Pantheon Scripts Quads card features a stunning quad patch on the front, with the landscape design allowing for a strong on card auto-filled in blue ink. You’ll find a serial number located on the reverse, and even the base card only comes with 99 copies overall.

It’s cheaper than the majority of vintage Rose cards, but that’s because there are fewer gem mint versions of the older editions, even considering the low print numbers seen with this release. 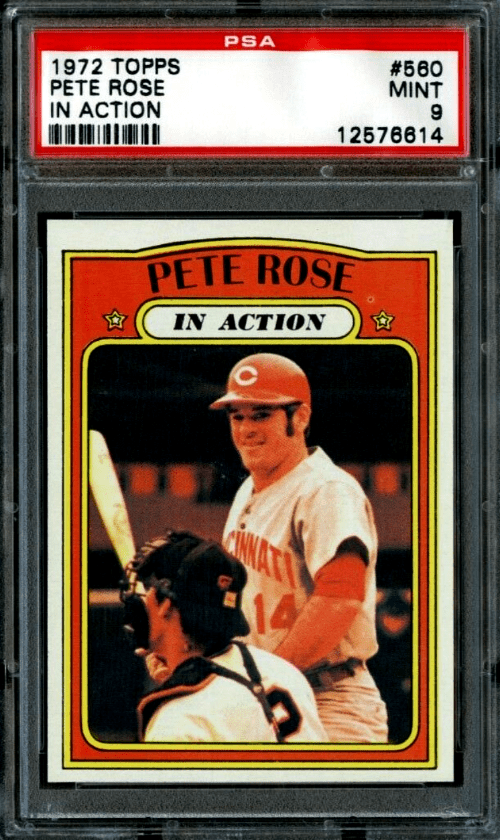 His most expensive baseball card is the 1963 Pete Rose rookie card #537.

If you are lucky enough to own a Pete Rose baseball card or three and would like an estimated valued please DM us on the Gold Card Auctions Facebook Page… cheers! 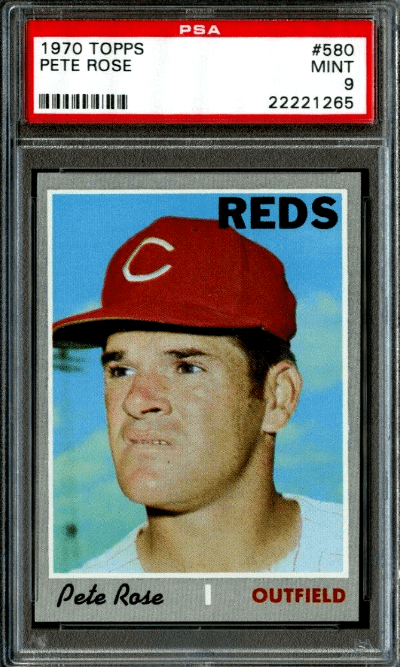 Here is the only COMPLETE Pete Rose Baseball Card Checklist (if you found a Pete Rose card that is not on this checklist please email us at info@goldcardauctions.com or comment in this article). 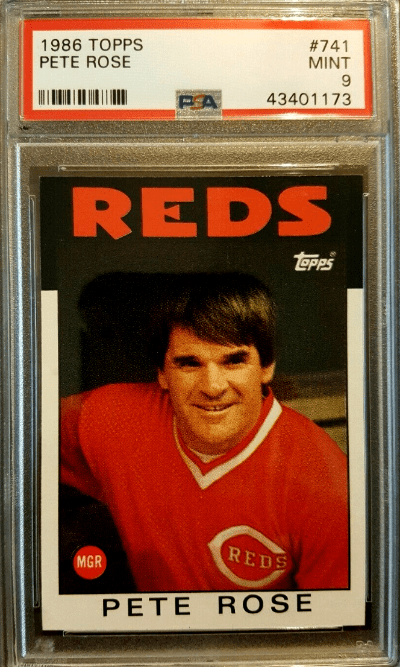 The baseball world was so obsessed with Charlie Hussle he even had a few manager cards.

Pete Rose Manager Baseball Cards are not worth all that much but are still pretty cool cards… all are produced by Topps Baseball… (correction one is by OPC).

It’s hard to argue with Rose’s CV, and he’s always going to be seen as a legend in the game, even if he’s effectively been banned for life.

The way he split with the Reds is a black mark on his career, and he has unsuccessfully applied for reinstatement three times over the years, to no avail. Commissioner Rob Manfred was the latest to reject his request back in 2015.

He’s still a three-time World Series winner, even if he’s ineligible for the Baseball Hall of Fame. Rose was still inducted into the Cincinnati Reds Hall of Fame in 2016, highlighting that they will always see him as a hero.

In terms of his collectible cards, vintage options have held their price well in recent years, while the supply continues to deplete ever so slowly. As many of the cards we’ve mentioned were released in the ’60s, it’s tough to find gem mint copies, and prices continue to rise for now.

You’ll have to look to later options if you want serial numbers and rare parallels, but the real money is always going to be found with his earlier releases.

There’s an investment piece to suit almost every budget, so we’d recommend checking them out if you don’t mind holding onto them for the foreseeable future.