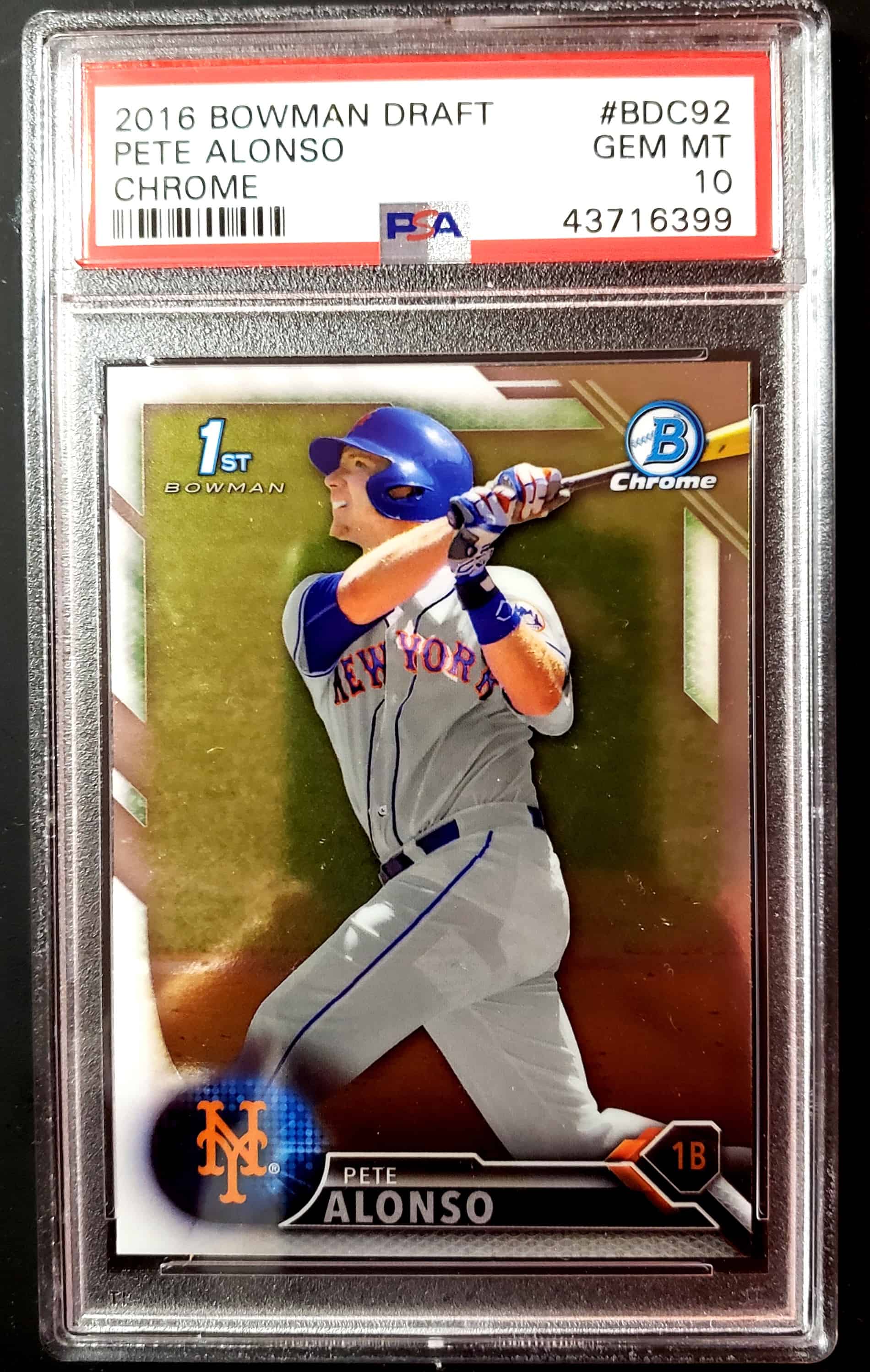 He attended the Unversity of Florida and drafted by the New York Mets in the 2nd round of the 2016 MLB June Amateur (and boy are they glad they drafted him).

Not only did the “Polar Bear” break the rookie home run record with 53 jacks but he was named the Rookie of the Year after a unanimous vote!

Needless to say, you will want to be buying some Pete Alonso rookie cards over the winter.

Here are the best Pete Alonso rookie cards from an investment point of view (in our opinion).

This card features the “Polar Bear” looking at a ball we can only assume he just jacked over the wall.

The back on the card reads “Hulking slugger who delivers majestic home runs… impressed scouts with mature approach and pitch recognition… Clears fences the other way… Has sound footwork at First Base“… pretty much sums up Alonso perfectly.

The Pete Alonso 2016 Bowman Chrome rookie card is available in a variety of outfits.

If we to have only one of the chrome cards we may pick the gold refractor auto… this is one SICK card… DRIP, DRIP, DRIP… the card is pictured below and will cost a small fortune (the last one sold for more than $6,200) 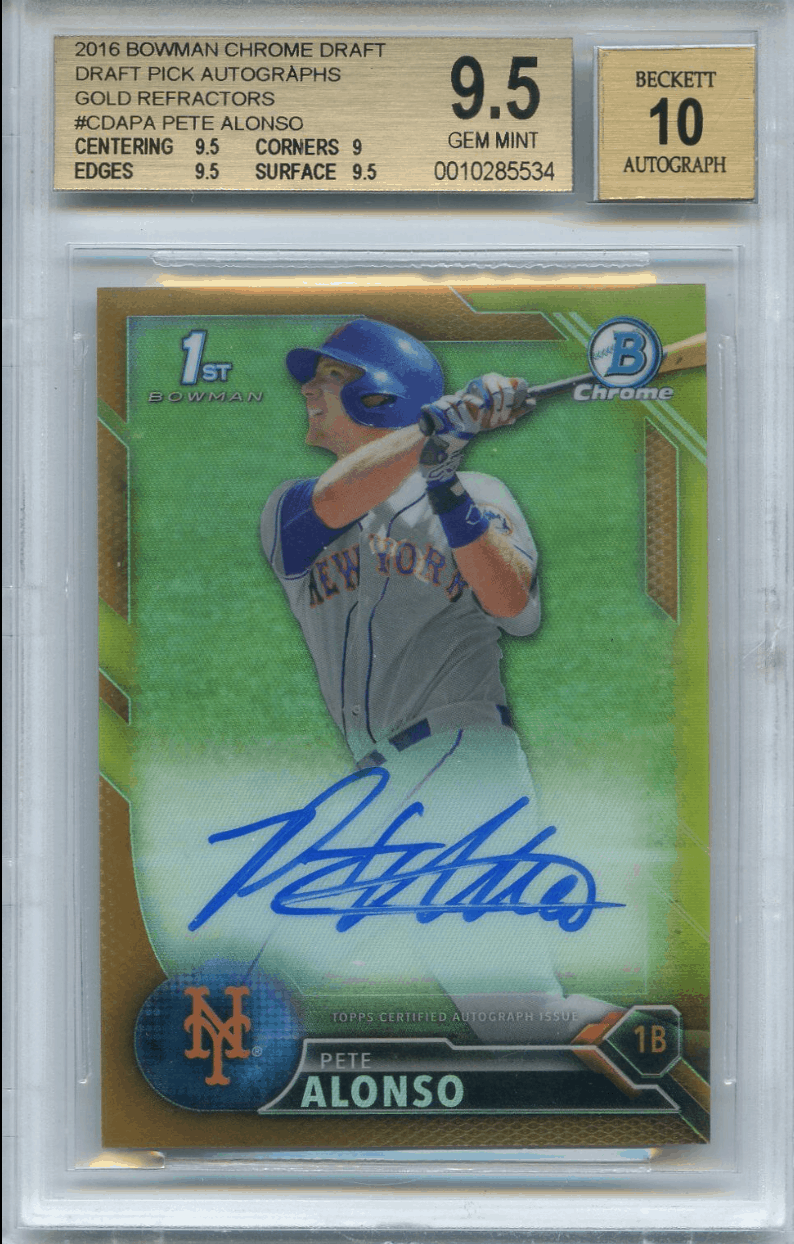 BUT… if you don’t have the bankroll to but a bid on the above version the standard Alonso 2016 Bowman Chrome PSA 10 card (non-auto, non-refractor) is still a great investment and can be had for less than $200 (for now… POLAR BEAR DRIP). 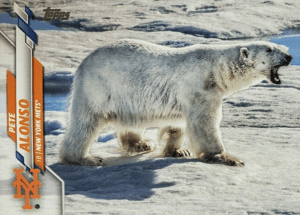 This may be one of our favorite cards ever printed in any sport!

This card is a tribute to Pete Alonso whos nickname is the Polar Bear.

The card is numbered #350 and is a must for all Alonso fans (unfortunately there is not many of this card printed which is good and bad).

Again this card can be acquired in a variety of outfits.

The 2019 National Treasures Pete Alonso RPA (rookie patch auto) is a pretty good investment (the card is pictured below). 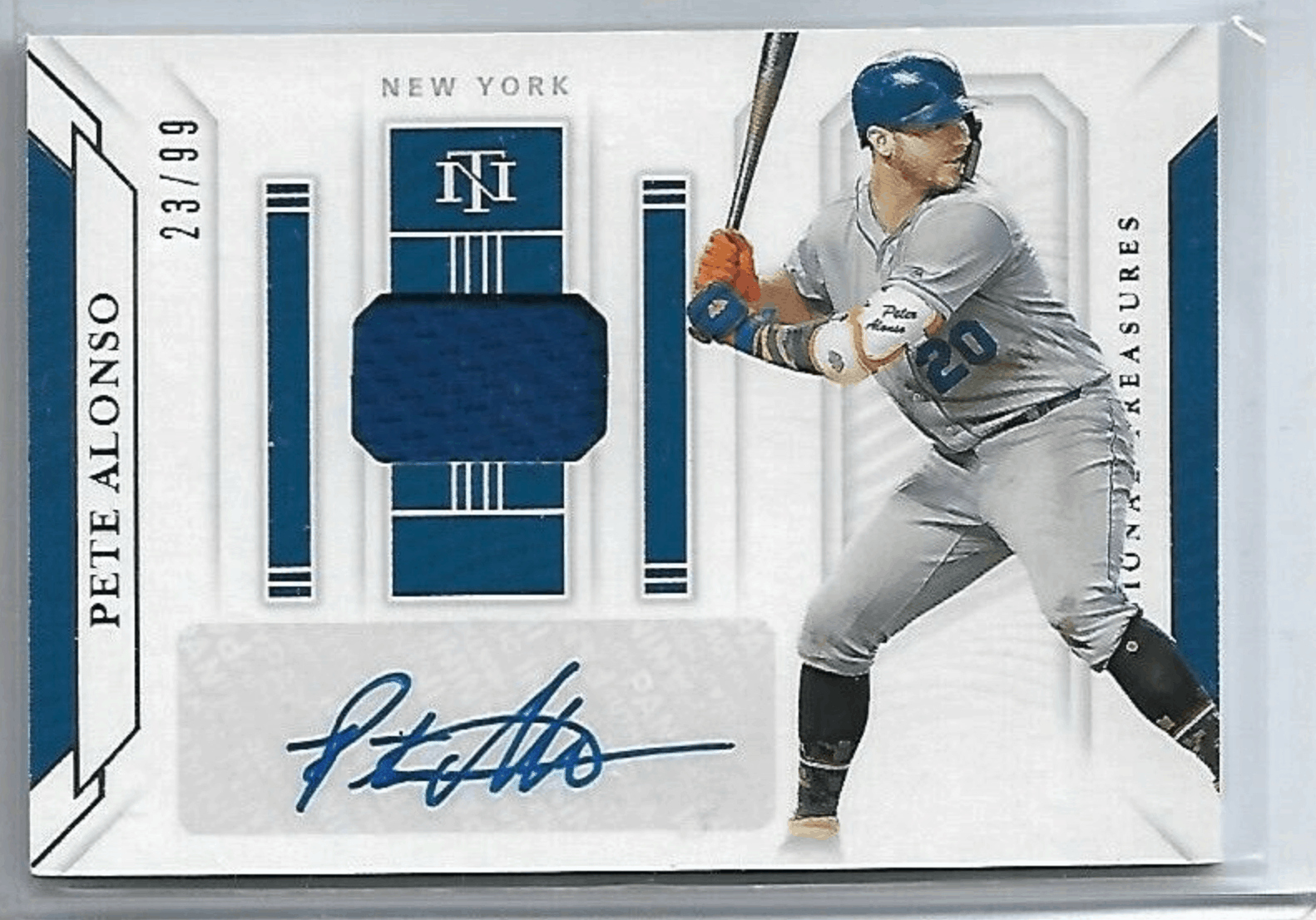 Not only do you get a GAME WORN patch but you also get Pete’s signature (a true win-win scenario).

The back of the card reads “It took just two full minor league seasons for Alonso to crack the bigs, and the rapid pace followed him to New York. The slugger teed off twice on April 9, 2019, adding two multi-base hits to his mounting stash. According to the Elias Sports Bureau, his 11 extra-base knocks were the most ever through players first 10 games”

We love, love, LOVE this card!

Oh, and did we mention we LOVE this card. 🙂 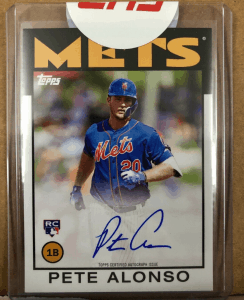 The only problem is it is extremely rare and you will most likely only see it up on eBay via auction a few times per year (we have yet to see a graded version either PSA or BGS… comment below if you have).

The reason we love the Pete Alonso 2019 Topps National 1986 AUTO Rookie Card is due to the throwback tribute to the 1986 Topps set (being a kid was awesome… no worries and true freedom).

This is a great investment for people who are new to the hobby looking to get their feet wet.

For our investment purpose, this card must be a PSA 10 or BGS 9.5 or greater to purchase.

The nice thing about the Alonso rookie card is you can buy the card (or a lot) for a relatively small price on eBay and then send it to PSA (or BGS) and cross your fingers hoping it comes back with a 10 rating (or BGS 9.5).

We are big Pete Alonso fans and actually purchased a couple of dozen of his rookie cards prior to the 2019 season (nice ROI there bro!).

Not only do we think the “Polar Bear” will win multiple home run titles, multiple league MVP’s, but we also believe Alonso will bring home the Mets fan a Wolrd Series sometime in the next 3 to 6 years!

Having said that Pete Alonso rookie cards are a … 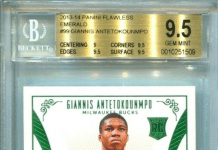 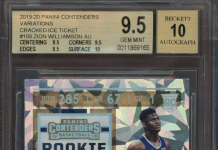 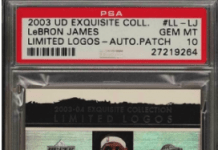