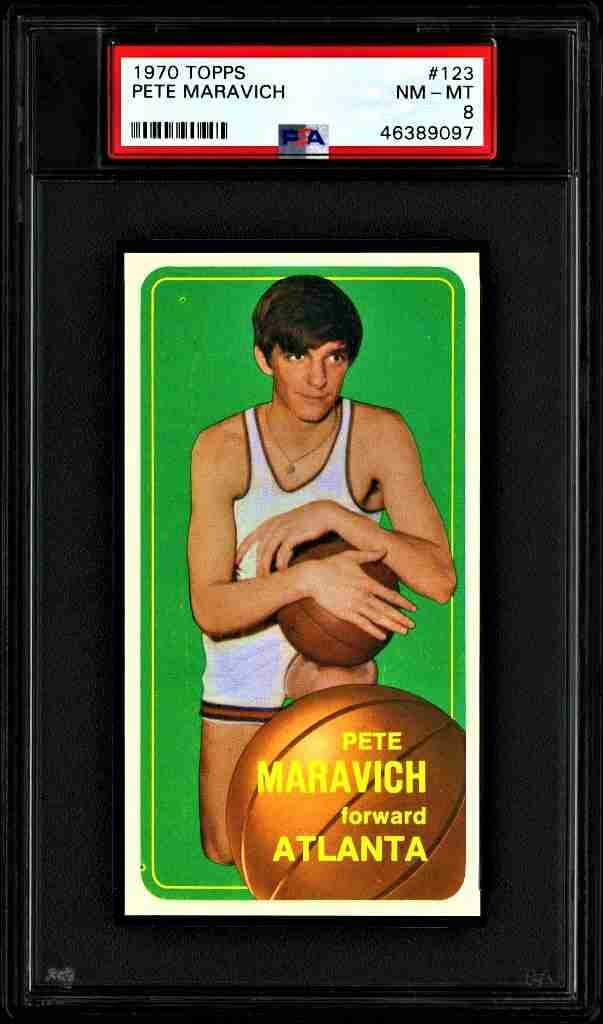 Pete Maravich, better known by his nickname Pistol Pete, was one of the greatest basketball players of his generation. His impressive career made him one of the youngest players inducted into the NBA Hall of Fame.

Although his career in the NBA was fantastic, his dominance truly started in college. To this day, Maravich is still the all-time leading scorer in NCAA Division I basketball. Following his impressive NCAA career, Maravich was drafted 3rd overall in the 1970 NBA Draft by the Atlanta Hawks.

Maravich spent 10 years with the Hawks, Jazz, and Celtics before knee injuries forced him to retire early.

He finished his career as a five-time NBA all-star, making the All-NBA First Team twice. He was also the scoring champion in 1977. Sadly, Maravich died suddenly at the age of 40 due to an undetected heart defect. Pete Maravich’s impressive career and sudden death make his rookie cards an attractive option for collectors.

As a result, there is only one recognized Pete Maravich rookie card. This would not be a fascinating article if we only looked at one card. So, along with the rookie card, we will look at a few of Maravich’s other early-season trading cards. 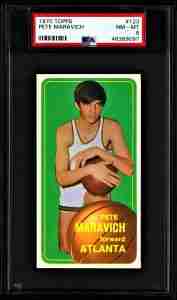 This card from Topps is Maravich’s official rookie card. It is one of the most valuable cards in the 1970 Topps Basketball collection.

The front of the card features Maravich crouching down on one knee, holding a basketball on his high knee. He is wearing his white Atlanta Hawks gear and green background.

Additionally, the bottom right of the card features a large basketball with yellow text on it that reads “Pete Maravich Forward Atlanta.”

The back of the card is oriented horizontally. There you can read a short blurb about his college career at LSU.

Additionally, it displays his height, weight, and college statistics. A fun comic on the back of the card also displays the fact that his father was his college coach.

Since this is the only Pete Maravich rookie card, it is precious. Even cards in poor condition can fetch over $100. 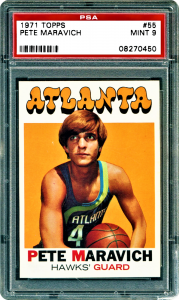 As we mentioned above, there is only one Pete Maravich rookie card. As a result, this is not a rookie card. Instead, it is Maravich’s second-year card from Topps.

The cards from this set shrunk to normal-sized cards and had a more traditional design. It consists of 175 players, with Maravich’s card being #55. 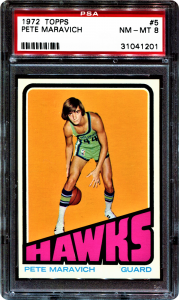 The final card we want to look at today is from Topps, Maravich’s third-year card. By this time, Maravich had made a name for himself in the NBA, and as a result, his card was fifth in the collection.

This card is similar to the one from the previous year as it features a white border and orange background. However, this time it reads “Hawks” in large pink lettering towards the bottom.

Below that, it reads “Pete Maravich Guard” in blue lettering. Finally, in front of the orange background, you can see Maravich dribble between his legs in his green Hawks uniform.

There is only one Pete Maravich rookie card, and as a result, it is the most valuable option. Pricing varies drastically depending on the condition of the card.

If you have a Pete Maravich rookie card and want an estimated value, email us or comment below! Please include two photos of the card in your inquiry.

While Maravich is a legend of the game, his cards have been out for so long that their prices have stagnated. If you find his rookie card in an old collection, you can turn a profit.

However, it is unlikely that you will turn much of a profit by purchasing one now and selling it later.

How Much Is a Pete Maravich Rookie Card Worth?

Depending on condition, cards can range from three to six figure prices.

When was Pete Maravich a Rookie?

How Many Pete Maravich Rookie Cards Are There?