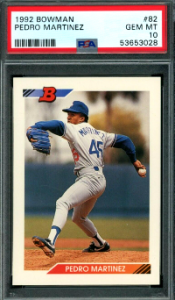 Pedro Martinez was a great MLB pitcher who played for five franchises in many major media markets, most notably starring for the Boston Red Sox.

He had excellent control and paired that with devastating power, which helped him overpower every batter he faced.

Post-playing career, Martinez was elected to the National Baseball Hall of Fame and has worked in a variety of capacities for both MLB franchises as well as a member of the media.

Martinez has a variety of cards from the early 1990s that celebrate the start of his career. Some are from his minor league days while others are from the beginning of his MLB career.

There are more Martinez cards from later in his career but as with any player, his rookie cards are some of his best.

Keep reading to find a full guide on everything you need to know about Martinez rookie cards and which ones are the best to invest in.

For those that are looking to invest in Martinez rookie cards, here are the top three options to consider so you can ensure that you’re getting the best potential returns possible.

This is the first Pedro Martinez rookie card from his MLB days and shows him in a Dodgers uniform with the big, blue, Los Angeles hat on.

The photo is a portrait of Martinez and the card comes from Upper Deck, a new company at the time who were raising the level of quality of the cardstock in the industry.

The card has a full white border that goes around the entirety of the card.

Overall, this card is a favorite among collectors everywhere but was produced in large numbers due to being in the “Junk Wax” era which puts a ceiling on its value.

This card is a minor-league card from Martinez’s time in the Dodgers system.

It shows him in the white Dodgers jersey and the card features the words “All-Star” in red across the bottom.

Surrounding the photo of Martinez is a thin, grey border that frames the card.

As a minor league card, its value isn’t sky-high but this card is still a good choice for investors who want to get in on the Martinez action, especially if you are a Dodgers fan.

Last but not least on this list is this card from 1992 produced by Upper Deck for their “Star Rookie” subset.

1992 cards are still considered Martinez rookie cards and this one is a strong option for those looking to invest.

It has a white border that frames the blue-and-white Dodgers jersey, a combination that gives the card a visually appealing look.

This is another good option for investors and represents a cheaper option than the other two on this list.

Martinez has cards that are worth lots of money and others that are worth smaller amounts, but the consistent factor is that they hold their value well due to Martinez’s legacy.

The three cards listed in this article offer different options that can be found at a variety of different price points and that will allow investors to get in at a price that they like.

Overall, his cards have good value and are attractive options for collectors.

Investors should take a long look at Martinez cards as he is a legend of the game and a fan favorite in many large markets which means big demand.

While Martinez has already been named to the National Baseball Hall of Fame and had his number retired by the Boston Red Sox, his cards still have time to grow upwards and make a solid return for investors.

For those that are looking for a riskier bet, they may want to look at a more unproven player who may have more upside, but for those looking for a safer bet, Martinez cards are as good as you can get.