This was the same draft that saw Mat Sundin go first overall to the Quebec Nordiques (what a great name, they don’t make them like that anymore).

OK, enough about the good old days, and let’s bring on the best Pavel Bure rookie cards for your investment portfolio. 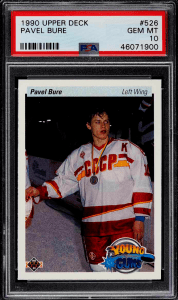 Here is the first time we were introduced to the Upper Deck “Young Guns” cards (Bure and Federov were the first two). The Young Guns cards were not immediately popular with collectors, but I remember getting this card back in the day and being the happiest kid in school for a solid week. The card is #526 and features Bure in a CCCP uniform with a medal around his neck.

GOLD CARD TIP: The Young Guns rookie cards from the early 1990s’ are some of the top investments in the hobby and should age very well in terms of ROI

The reverse of the card reads, “The Soviet Union’s Top Forward, Bure, played his first games for the Central Red Army in the Soviet Union League 87′-88′ at the age of just 16. He played regularly for the Red Army in 88′-89′ and was named the top rookie in the Soviet League. He led the Soviet National Junior Team to a gold medal in the 1989 World Junior Championship in Alsaka and was selected to the tournament’s 2nd All-Star team“.

If you’re looking to buy the best Bure rookie card in terms of potential ROI, the 1990 Young Guns is your bird.

Collecting cards in the ’90s doesn’t get much better than Bure on rollerblades in this 1991 Upper Deck rookie card. It’s super corny, but that’s why we love it (what kid didn’t want to be Bure in this photo back in the day).

The card is #54, and the reverse reads, “A veteran of the Soviet National Junior Team, Bure scored 27 goals in three IHF Junior Championships“.

This card is a must, just for old times’ sake.

The most expensive Bure rookie card is the UD Young Guns #526. The corniest hockey card of all time may be the 1991 Bure Upper Deck card, with him sporting some fancy rollerblades.

The value of Bure rookie cards should be slightly above flat for the foreseeable future.

If you would like an estimated value of any Pavel Bure cards in your collection, please email us at least two photos to value@goldcardauctions.com.

Unless you’re looking to pick up a bit of nostalgia, it’s best to let sleeping dogs lie (we must admit, however, we were guilty of picking up the Pavel Bure rollerblade card.