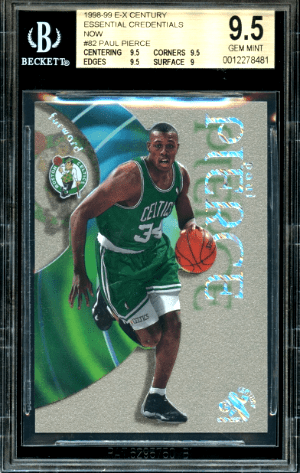 As the 1998 NBA first draft pick, Paul Pierce (10/13/77) was always going to be a star. “The Truth” earned his nickname after dazzling Shaquille O’Neal, and went on to become a ten-time All-Star, winning the NBA Championship in 2008.

We’ve come up with a list containing three of the best Paul Pierce rookie cards, looking at values, as well as how they could do from an investment perspective.

Paul Pierce Rookie Year Stats: 47 games started, 16.5 ppg, 6.4 total rebounds, and 2.4 assists… those are some pretty darn good stats yet he only finished 3rd in the rookie of the year voting.

Pierce’s rookie cards came out at the right time, as print runs started to lessen, and rare parallels began making it to market. There are 18 RCs to choose from. We’ve narrowed it down to three of the best options, released during the 1998-99 season. 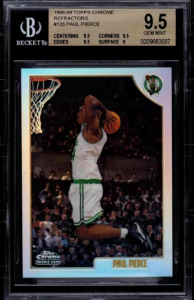 Where better to start than with Pierce’s Topps Chrome card? It features a spectacular action shot of the player as he powers towards the net, leaping through the air with a ball held behind his head.

“If you want a Pierce RC for your personal collection, this should definitely make the shortlist.”

There’s a Celtics logo in the top right corner, while there’s also a Refractor parallel which is worth big money when looking at higher grades.

Next up is a rare parallel which is numbered to just 82 copies overall. The ‘98 E-X Century Essential Credentials set had two subsets, named ‘Now’ and ‘Future’.

The 1998 E-X Century EC Now Paul Pierce RC is almost impossible to find gem mint copies, especially due to a print run that was minuscule for the time

From the Now set, this card features an image of Pierce dribbling with the ball, set against a silver background. His name is found in large chrome lettering along the side, while the card has no hard border. 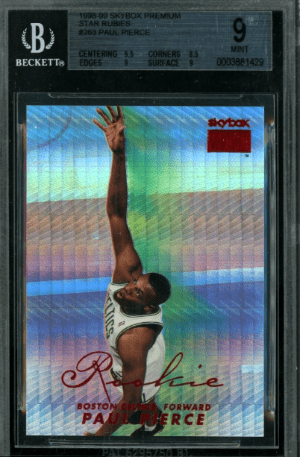 The 1998 Skybox Premium Paul Pierce rookie card is a great third option if you’re looking to grab one of the best three-point shooters of all-time.  It features an image of Pierce as he leaps up to dunk the ball, wearing an iconic green and white Celtics jersey.

His name is centered at the bottom with the team name just above his name. The word “rookie” is printed in cursive above his name/team. 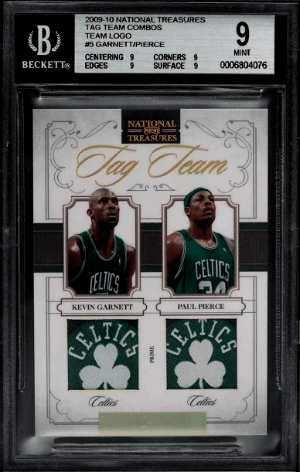 Pierce’s RCs are extremely valuable, if you’re able to find gem mint copies of the rarest editions. As he was the first pick in the draft, it’s not like there’s a shortage of great options to choose from.

Originally, cards such as the 1998-99 SPx and the 1998-99 SP Authentic RC were seen as the most expensive Pierce releases, but they’re overproduced, unless you’re looking at the Spectrum parallel for the SPx that comes with a print run of just 30 copies overall.

Expect to pay at least four figures if you’re looking at high graded versions of the cards seen above. 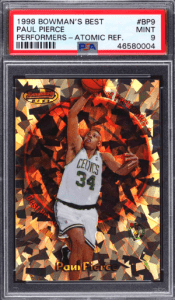 Shaq tells it best, when going over how he decided on a name that stuck with Pierce throughout his career:

“Sure, I knew Paul Pierce beforehand. I knew he was from California because I played for the Lakers. I heard about him when he was in high school, saw him play at Kansas a couple times. But then when we were playing against him in the NBA, it was just a completely different story. It was at our home game against the Celtics on March 13, 2001, when I noticed he wasn’t just like everybody else. He was just hard to guard. And I was just, like, “Man, this dude is the truth!”

Even if he didn’t add as many NBA Championships as he would have hoped, his cards have to be seen as one of the better investment options from the era.

He’s also a no-brainer when it comes to Hall of Fame contention. Having retired in 2017, he was nominated for the Hall of Fame’s 2021 class. Finalists for the 2021 Hall of Fame class should be revealed in March, with the final class due to be announced sometime in April. Selection would add another bump to his RC prices, so it’s probably better to grab a copy or two before the market adjusts to the news.