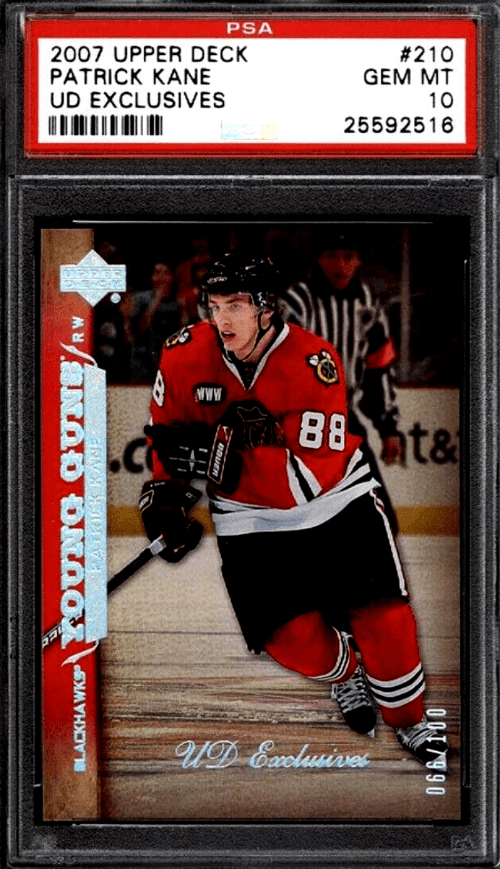 The undisputed star at the Blackhawks, he became the youngest U.S. player to reach 1,000 career regular-season points in January 2020, and there’s no sign of him slowing down just yet.

We’ve come up with a trio of the best Patrick Kane rookie cards on the market, as well as investment advice as to the player heads into a key stage of his career.

As he was the first overall pick in the 2007 draft, it’s unsurprising that Kane had a heap of rookie cards released that season. There are 20 overall to be on the lookout for.

This means that there’s something to suit almost every budget, with multiple signed editions and patches and parallels.

The first option on our list is a popular card for several reasons. There are just 100 copies overall, while adding a patch and an on-card auto make it more tempting for collectors compared to most of his RCs.

From the Future Watch subset, his 2007-08 UD SP Authentic card has crisp gold trim, and there’s also a decent shot of the player on the left-hand side. Due to the low print run and the additional patch, it’s pretty expensive compared to the others, especially for gem mint versions.

This card might have the same number as the one seen above, but it’s a few levels below in terms of prestige. For example, the print run has been upped to 999, while there’s no patch to speak of.

It does have an on-card auto, as well as a simple portrait design which allows Kane to take up the focus on the front. If the price of the patch puts you off, this could easily be one of the better options from his rookie year.

The 2007-08 Upper Deck Series 1 is the final Kane rookie card to make it onto the list. With no patch or auto to speak of, it’s one of the more affordable options, even if gem mint versions are slightly more expensive in comparison.

It features an action shot of Kane on the ice, with his number and faces displayed. There’s an official in the background shot, but he doesn’t distract from the winger. The player’s name is found on a red border on the left, finished off with chrome trim.

The most expensive Patrick Kane hockey card is the 2007 Upper Deck Young Guns High Gloss Parallel card (sold for over $4k in August 2020).

If you would like an estimated value of a Patrick Kane rookie card, please email us at value@goldcardauctions.com.

Kane has many rookie cards with low print runs, while he’s always going to make it into the Hall of Fame when he eventually does decide to retire.

For now, that looks a long way away, and there’s always a chance he could add to his medal tally in the coming years.

No matter what, Kane will likely go down as the greatest Blackhawk ever. It’s hard to hand the accolade over to a current player, but he was the star on a team that won the Stanley Cup three times in six years, which is too much to ignore!

Not only that, but he also scored the overtime winner in 2010, was the playoff MVP in 2013, and shared the 2015 NHL post-season scoring title with Tampa’s Tyler Johnson (23 points). He’s certainly a one-of-a-kind.

The current iteration of the Blackhawks might be a shadow of the side seen five years ago, but there’s still a chance that Kane could come up with the goods again before he decides to call time on a legendary career.

For now, Kane’s rookie cards are a solid pass for us, as they’re not particularly popular, and he is quickly running out of room for massive improvement.