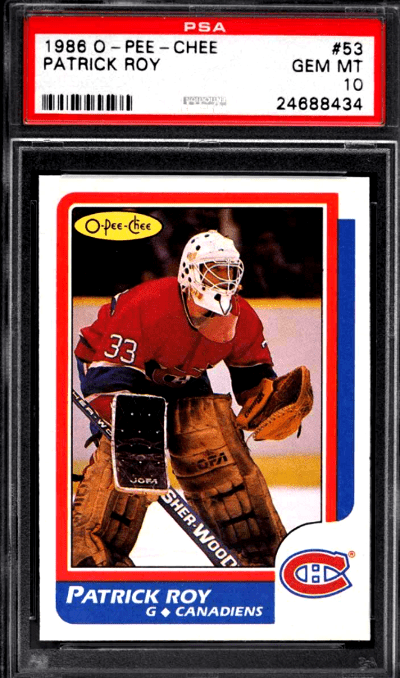 Patrick Roy (10/5/1965) was selected 51st overall by the Montreal Canadiens in the 1984 NHL Draft. He played previously for the Sherbrooke Canadiens of the AHL.

He played in only one game as a rookie but posted more than 1,000 saves and 23 wins (versus 18 losses) with one shutout in his sophomore season. 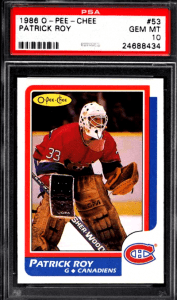 The 1986 Patrick Roy O-Pee-Chee RC #53 is the gold standard for a limited class of Roy RCs. As a Canadian trading card company, O-Pee-Chee is no stranger to elite hockey cards.

The 1986 set featured Roy as he was fresh off of a Stanley Cup victory. Roy’s rookie card is the undisputed gem of this set.

It features Roy hunched over in a defensive goal-protecting stance. His brown leather pads and glove are old-school NHL, as is his logo-less white facemask.

The O-Pee-Chee design is simple and classic, with a red, white, and blue border and accent combo. A Canadiens logo occupies the bottom-right corner beside a blue and white nameplate.

French text on the rear side of the card is a quirk common to O-Pee-Chee cards, and is a notable distinction between this and the 1986 Patrick Roy Topps #53.

The population of PSA 9s is far greater than the pool of PSA 10s for this card. Though a 10 will generally cost you more, it may retain stronger long-term value. 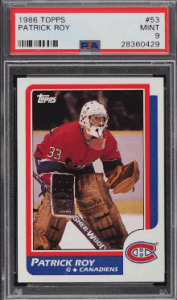 You’ll tell the difference in these cards by the Topps logo in the upper-left corner (where the O-Pee-Chee logo resides as well.

A lack of French text on the card’s rear is one of the only other differentiators. Oh yeah, the Topps rookie card also tends to cost less than the O-Pee-Chee alternative.

The market is flooded with Gem Mint versions of this card, making it the more affordable of the two primary Patrick Roy rookie cards. 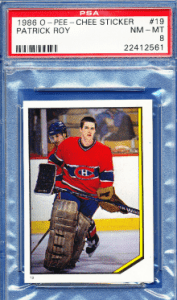 Smaller than a full-sized card, it shows a boyish Roy helmetless, skating casually in his red Canadiens sweater with his stick held parallel to the ice.

It’s an extremely spartan design, with only a J-shaped black and yellow accent inside of a white border.

The sticker is generally more affordable than the Roy rookie cards, which may make it an appealing piece of memorabilia for collectors with a limited budget. 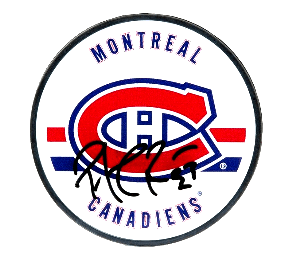 With a nickname like St. Patrick and Hall of Fame credentials, the verdict is out on Patrick Roy: he’s a legend.

With a severely limited selection of Roy rookie cards, the two featured here are strong investments. Though they’re not bank breakers, the O-Pee-Chee in particular has a high price floor.