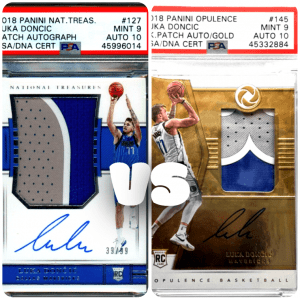 The product is not lauded because it was derived from a brilliant creator.

Actually, you’re more likely to find sports cards on the corner of pop-culture and sports history than at The MET or The Louvre.

Other than player performance, it’s purely driven by the consumer.

In other words – Capitalism.

Anyone who was a sports card collector during the 80s and 90s understands this lesson.

The era of oversupply has come and gone.

Card suppliers collapsed into, what we now see, a market oligopoly, and have baked scarcity into their product and insanely overcharge (just like any good ole’ monopolist).

Example: for being an important person in Baseball history, everyone probably has a 90s Donruss Sammy Sosa rookie (I have two).

But while this does factor into card price, and make them a decent secondary (and extraordinarily fun) investment vehicle, card manufacturer influence (in terms of supply and demand) only goes so far.

I recently returned to sportscard collecting and quickly noticed that certain sports are more expensive than others.

NBA cards, for example, seem to sell for a lot more money than the other three sports.

And I bet international fame is the driver.

I also noticed that certain cards sell for significantly higher, even within the same set.

With built-in scarcity, this isn’t surprising.

That is until Panini National Treasures (NT) is mentioned.

I was stunned when I saw a Luka Doncic NT RPA sell for the same price as a BMW.

Why is National Treasures so desirable?

Does the price premium guarantee that these cards are even a good investment?

Aesthetically, there are other Panini products that are more beautiful (2018 Opulence for example).

That’s not an SP or even an SSP!

This is irrational consumer behavior at its best…

My theory is that…

1. People overpay for these cards because everyone else is overpaying. A great illustration is how most people believe exclusive wine tastes better. Apparently exclusivity (in the form of price) always tastes better.

3. People are inherently biased towards groupthink. This sort of ties into reason one with the distinction being that that reason has a market flavor, whereas groupthink bias has societal undertones.

4. People will obviously justify their purchase to make themselves feel good.

5. We live in a capitalist society. In capitalism, there must be winners and losers – haves and have-nots. And it looks like the “invisible hand” has chosen NT to be that dividing line.

In sum – exclusivity and a whole lot of irrationality (bias) are driving NT RPAs #/99 market prices.

Depending on the foundation, I can buy exclusivity as an investment.

What makes Capitalism great is competition for market share.

Sure, Panini and Topps own a lion’s share of the market.

Someone dealing in sports card arbitrage has very little influence in the cards they’re selling with exception of 1) paying for a PSA appraisal which returns as a 10, 2) fantastic card care prior to the auction, and/or 3) buying and holding a card as a long term investment to drive up demand.

However, these three influences are applicable to all cards, thus negating any real advantage over any other card.

But isn’t Capitalism driven by consumption?

And isn’t consumption driven by consumers?

And aren’t consumers driven by preferences?

Yes, yes, and yes! Do consumer preferences change, especially over time, even for luxury goods (like high-end sports cards)?

But if the product isn’t changing all that much, then how will consumer preferences change?

Market disruption in the form of a changing consumer base.

30 years ago, antique furniture used to be the rage.

The same can be said in the antique business, writ large.

But why the change, all of a sudden?

The consumer base changed while the product didn’t.

I’m not insinuating that basketball card consumption will go down in the future.

If Adam Silver continues to grow the NBA brand internationally, consumption is bound to go up.

And all signs are pointing in the right direction.

What makes the Luka National Treasures more desirable than a 2018 Luka Opulence Gold RPA, a 2019 Crown Royale Rookie Silhouette Prime RPA, or a 2018 Court Kings Heir Apparent Sapphire (other than the missing patch)?

In my biased (yet open-minded) opinion – nothing.

In fact, these sets are rarer and aesthetically more appealing than NT.

How about National Treasures?

The most expensive bottle of wine I’ve ever bought was a “highly rated vintage” $300 French Pinot Noir before I proposed to my wife and a $100 “well-rated” Napa Cabernet (bought on two different occasions).

I’m not a wine connoisseur, but the enjoyment gap between the $300 bottle and a $20 Robert Mondavi Pinot Noir from Costco doesn’t justify a $280 price difference.

However, the $100 Napa Cab was the best bottle of wine I’ve ever drunk and worth every penny.

If your interested in submitting an op-ed piece please email us at oped@goldcardauctions.com