Ozzie Albies has been nothing short of spectacular since entering the league in 2017 with the Atlanta Braves. Braves fans should be counting their lucky stars they both him and Ronald Acuna Jr. panned out to be not just good players but All-Stars!

Keep reading to discover which Ozzie Albies rookie cards are waiting to jump into your card collection. 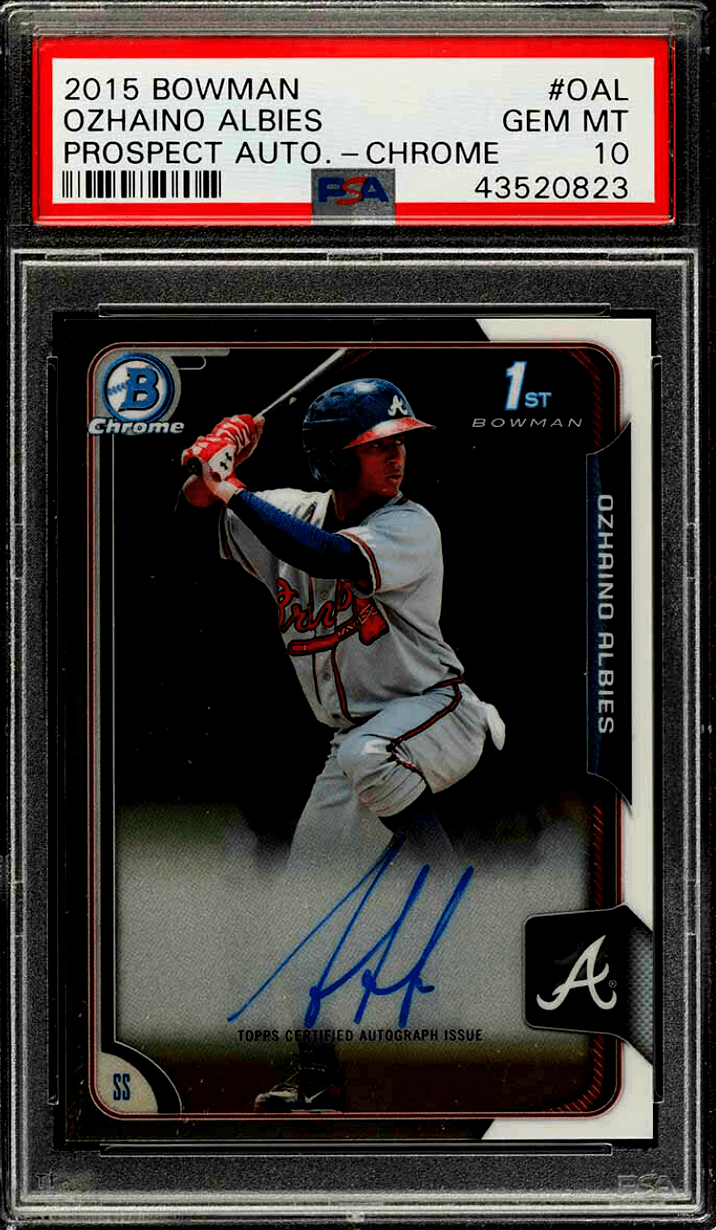 The following year (2018) he showed unexpected power mashing 24 homers but his average dropped down to .261 with 72 RBIs and 72 stolen bases. Then in 2019, he put it all together batting .295 to go along with 24 homers, 15 stolen bases, and 86 RBIs solidifying himself as one of the best young players in the league.

Given his beast of a season in 2019, his rookie cards and to be honest him as a player is still underrated as highlights often bypass Albies in lieu of teammate Ronald Acuna Jr. who has became one of the games best players (if not the best).

We expect Ozzie Albies to have a great next few years and will enjoy buying his undervalued rookie cards as soon someday he will get his recognition. 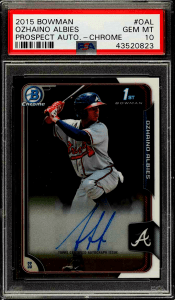 2015 seems like such a long time ago but Bowman saw something in Albies all the way back then.

The 2015 Ozzie Albies Bowman Prospect rookie card is a great buy and shows Ozzie jacked up, ready to unload on the ball (BOOM GOES THE DYNAMITE!), and is available in a variety of high-end parallels.

Numbered #BCP71 the back of the card reads “Thumped .381 in 19 Gulf Coast League games in 2014 professional debut… logged seven three-hit performances… Hammered southpaws at a .404 clip. Attack pitches with a short, quick stroke from both sides of the plate… Drives outer-half offerings the opposite way… Speedy runner with good instincts… Rangy defender with soft hands… Signed at age 16… competed as the second-youngest player in 2014 Appachlin League… Shares Curacao home with Jair Jurrens“. 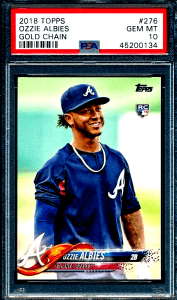 Topps broke out the bling for the 2018 Ozzie Albies Gold Chain rookie card and we love it… honestly, it might be our favorite Albies rookie card and it comes at a favorable price tag.

Numbered #276 the card shows Albies with a sly grin on his face that seems to say “yea I’m a baller” while showing off that bling in the form of the gold chain. 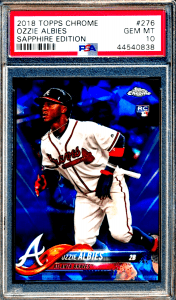 Another sick Ozzie Albies rookie card from Topps that shows Albies running out the batter’s box after getting ahold of one… it looks like from the expression on his face the ball might have left the park but we can’t say for sure.

Numbered #276 the back of the card reads “Ozzie began 2017 as the youngest player in the International League and ended it as a lineup fixture for the Braves. Dubbed “Little Giant” because of his diminutive height, his contributions were anything but small. Albies batted .293 with a .828 OPS in his first 40 games for Atlanta“.

We love this card as a long or short term investment and gave recently added a couple of high-grades to our sports card investment portfolio.

Ozzie Albies rookie cards are somewhat undervalued at this time.

Please email us at value@goldcardauctions for an estimated value of any of your Albies baseball cards.

You can also hit us up on the Gold Card Auctions Facebook Page.

Ozzie Albies should be a staple of the Braves lineup for years to come and is a solid little investment that is currently undervalued.

A good portion of the reason for his cards being undervalued is he is often outshined by the greatest player on earth in Ronald Acuna Jr. That being said Acuna Jr. should eventually lift Albies rookie cards along with his own (what is the saying? A high tide lifts all ships in the harbor?).

We would not be surprised at all to see this young Braves team return to the World Series and maybe even win one or two in the next 3 to 6 years.

We are strong believers in Albies and are buying his rookie cards on eBay auctions when the price is right.