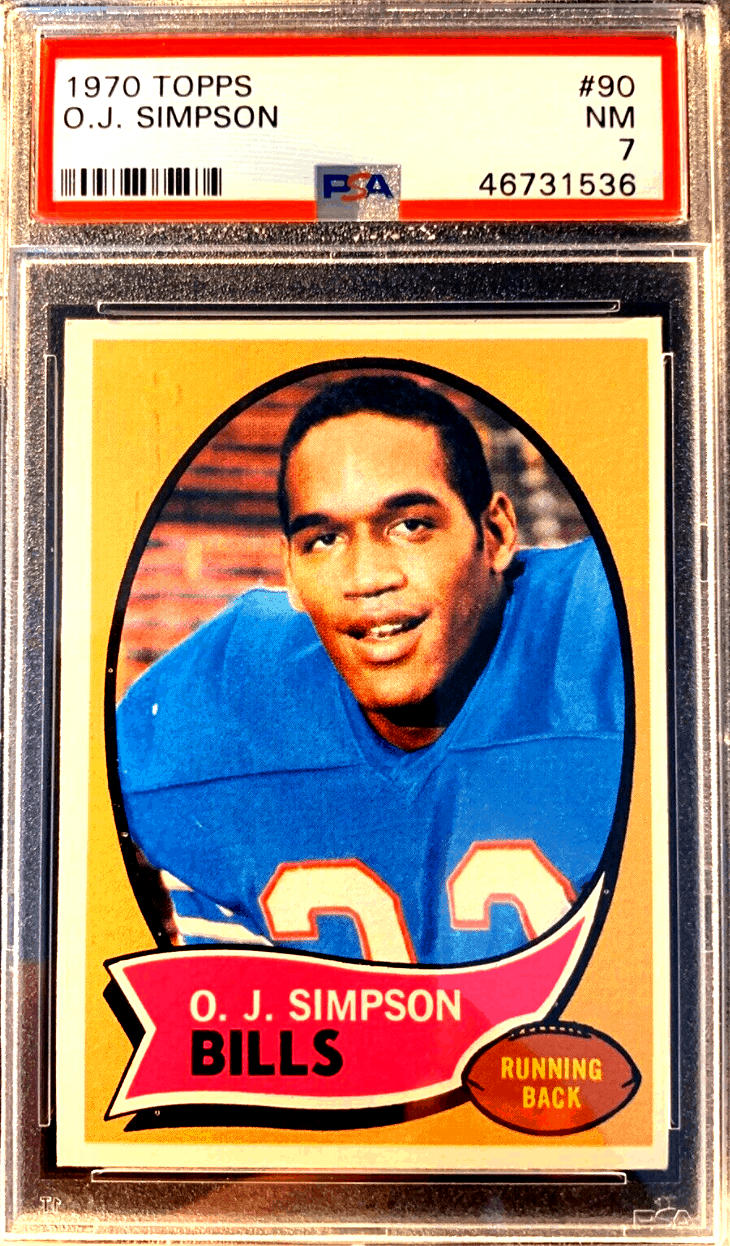 His rookie season was decent for a young guy just getting his feet wet. He really took off in his fourth year (1972) rushing for 1251 yards and 6 touchdowns.

The following season (1973), he simply had one of the best seasons a running back has ever had in the National Football League. He rushed for a mind-blowing 2003 yards with 12 touchdowns and get this, an average of 143.1 yards per game!

Here are the top-rated OJ Simpson RCS from an investment perspective..

Here is the O.J. Simpson rookie card you want in your sportscard investment portfolio. His proper Topps rookie card and a great-looking card at that. We love the up-close photo of the Juice in happier days.

But if you look close, you can see a small level of discomfort in those eyes, like he is trying to push something down and out of his mind. This card is his top rookie card by a wide margin at any rate

Numbered #90 the card is outlined in an orange/yellow color with a flag hold the OJ Simpson name. A small football completes the card with the position of the player, in this case running back. 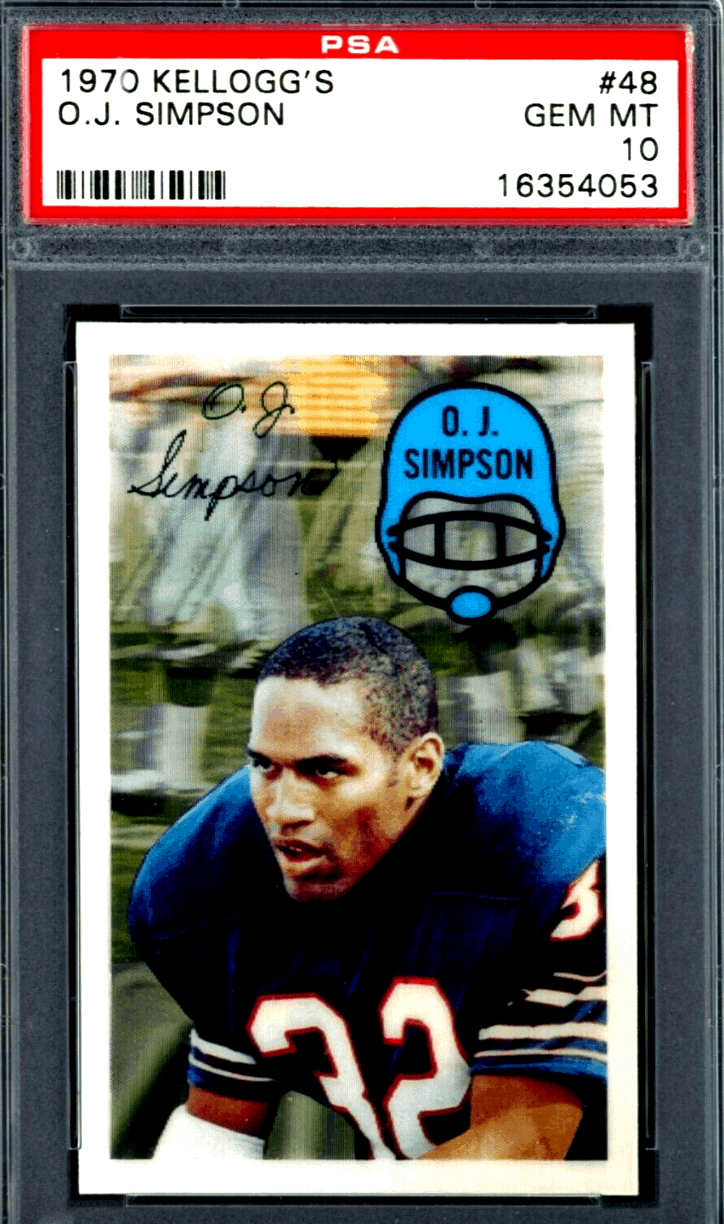 The 1970s Kellogg OJ Simpson rookie card is actually a pretty sharp-looking card in our opinion and shows OJ with his game face on… I wouldn’t want to tackle him, his face scream “I could run over a mack truck! and will if I have to!”.

Numbered #48 the card is outlined in a white border and has his name printed in cursive (top-left corner) and his name inside a blue football helmet (top-right hand corner)… wouldn’t it have made more sense to put his position in place of one of the names? But what do we know we don’t design cards 🙂

Were by not any means a big OJ fan but might consider buying this card if the price was right. 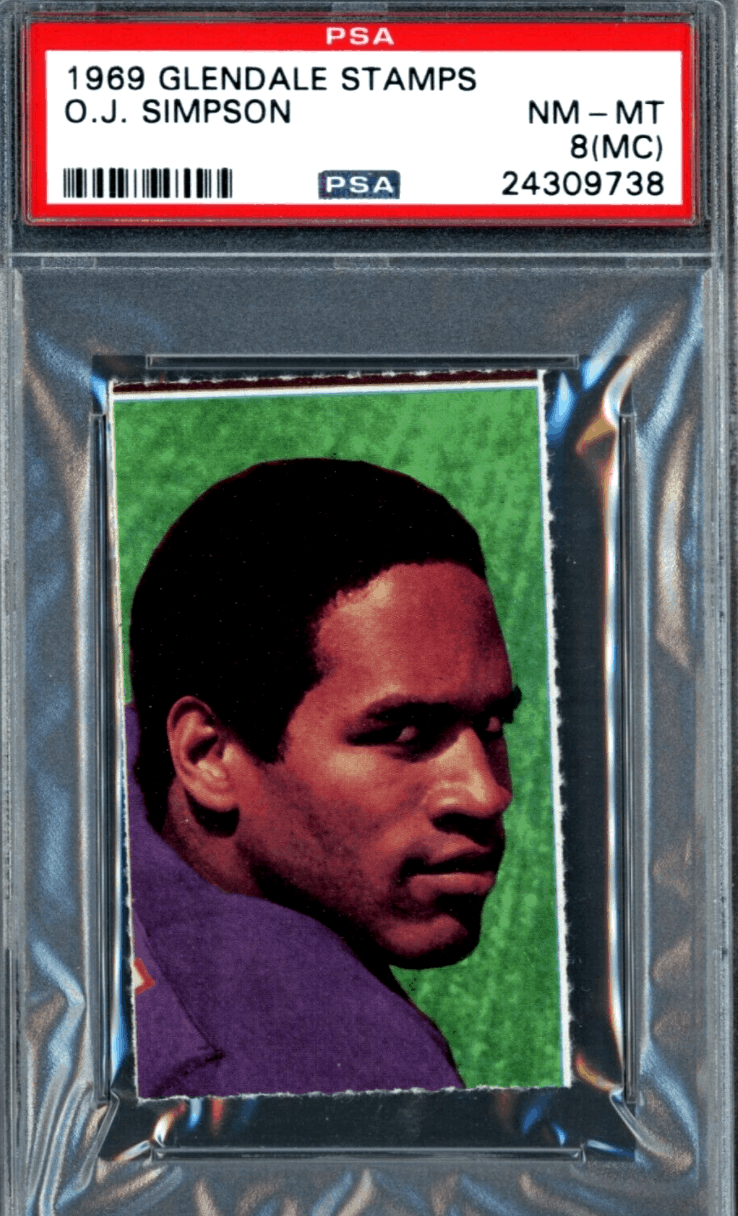 This card isn’t really worth owning… it will most likely increase in value over the time but the ROI would be so small it’s not worth the time/money unless you’re a HUGE OJ aka Juice FANBOY.

I can’t imagine us owning this card in any situation… unless it was given to us for free. 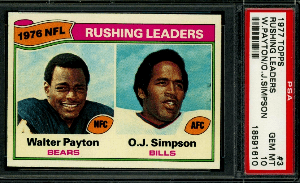 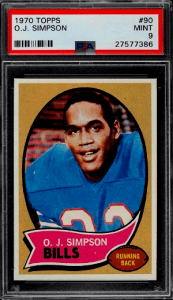 The most expensive OJ Simpson RC by far is the 1970 Topps and his cheapest is by far the Glendale Stamps.

If you are thinking about buying a Juice rookie card and would like a second opinion please email us at advice@goldcardauctions.com or DM us on the Gold Card Auctions Facebook page (we will most likely respond fast on FB but email is fine too).

Looking to obtain an estimated value of an OJ Simpson football card? Post in the comments below or email us at value@goldcardauctions.com.

Given all the drama around OJ Simpson, his Topps rookie card still increases in value year in year out as people tend to overlook his trouble pass and it seems he has become more of a popular punch line for jokes more than anything.

How much is a OJ Simpson rookie card worth?

An OJ Simpson rookie card can be worth a few hundred dollars or a few thousand dollars depending on the condition. Email us at value@goldcardauctions.com to receive an estimated worth of your OJ Simpson RC.

What is the most valuable football card?

The most valuable football card is the 2000 Playoff Contenders Tom Brady rookie card #144 which sold for more than $500,000 in January of 2021 via eBay auctions.

Which rookie cards are most valuable?

When was OJ Simpson's rookie year?