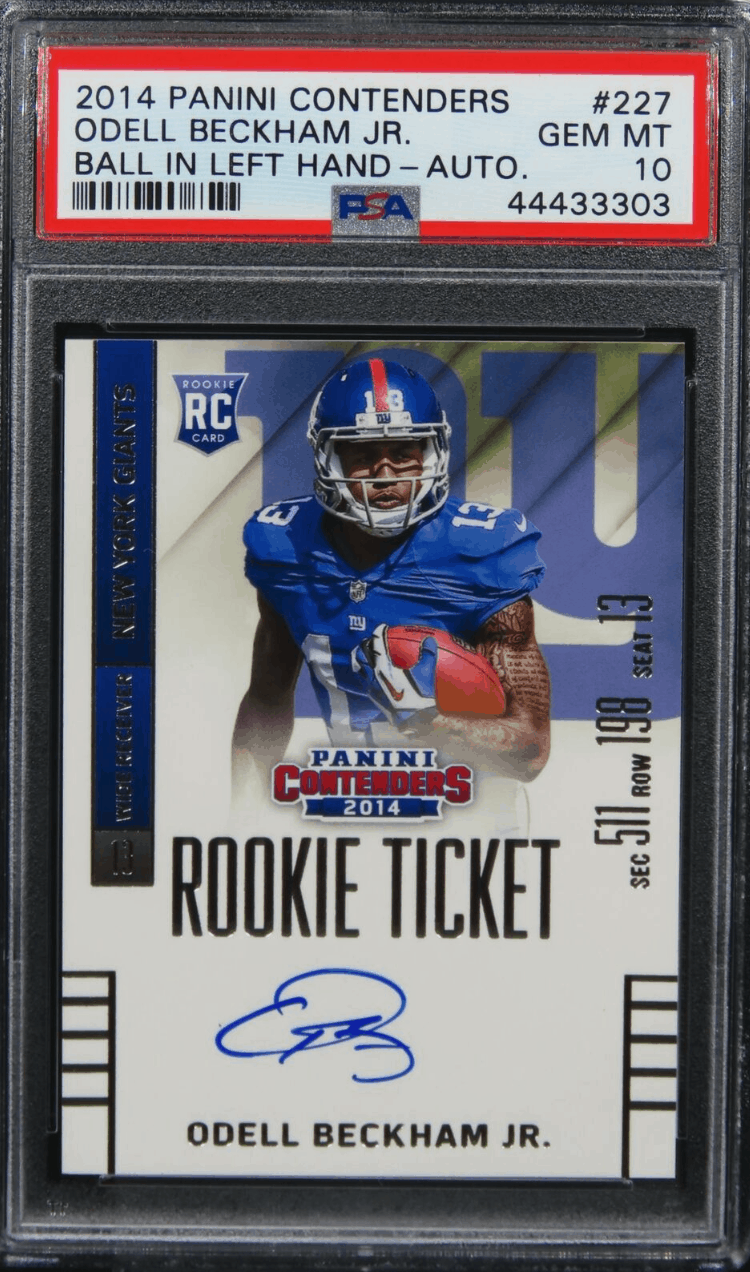 Odell Beckham (11/5/92) is a wide receiver who currently plays for the Cleveland Browns.  He was the 12th pick in the 2014 Draft, where he was signed by the New York Giants.

He was named the NFL Offensive Rookie of the Year in his first season and made the Pro Bowl in his first three years with the Giants.

Beckham Jr. has made a name for himself as one of the most talented players in the league, even if the production doesn’t always match up. His highlight reel is among the best in the league as he uses his insane athleticism to make tough catches. 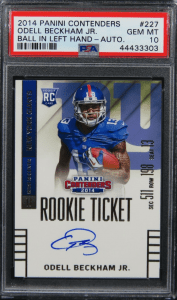 The most popular Odell Beckham card at auction as of right now, there are a trio of variations which are as follows:

The reverse doesn’t feature a quote, but it does have a guarantee for the on-card signature. 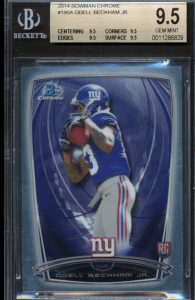 The 2014 Bowman Chrome comes with a range of different editions which bump the price up;

“There are abundant similarities between Beckham and Mike Wallace of the Dolphins, including the fact that both hail from New Orleans. The good-sized athletes rank among the fastest receivers in the NFL and each has the ability to make catches far down the field and escape after the catch.” 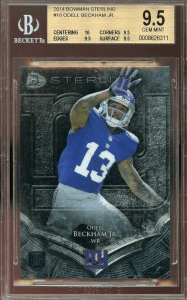 The 2014 Bowman Sterling is the most affordable card on the list, with a PSA 10 valued at roughly $50. The reverse has a Bowman Reflection, which notes;

“Odell credits his extensive soccer background for giving him the footwork and the stamina required for “American football”. When he was 13, a soccer coach tried to get him on a U.S. junior national team, but Beckham preferred to focus on the gridiron, where he became one of the country’s top recruits”.

There were so many different Odell Beckham Jr. rookie cards made that it was difficult to limit the list to just three. This one mentioned below wasn’t good enough to make our top three, but it’s still a great card that investors are going to want to look at. 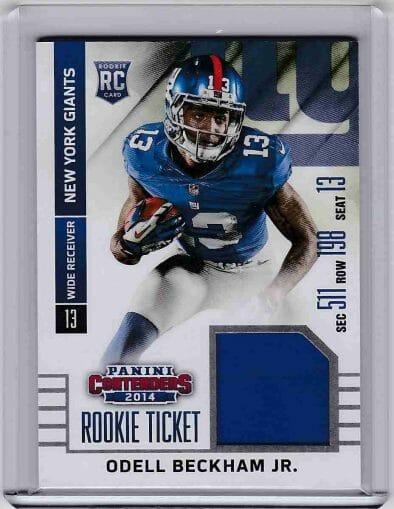 The Panini Contenders Rookie Ticket set is one of the most popular for NFL rookie cards as investors have learned to love the unique design. This one is extra special as it also features a jersey patch in the bottom right corner.

Beckham Jr. is shown in action as he has the ball tucked under his right arm while his eyes are up, ready to scan the field for any oncoming defenders. His name is posted along the bottom of the card and the rookie card badge is placed in the top left corner, beside the team name.

If you would like an estimate of any of the Odell Beckham Jr. rookie cards you have please email us pictures at value@goldcardauctions.com.

Beckham’s talent is indisputable, but his temperament is slightly unpredictable. His switch to the Browns shocked the sports world, but he hasn’t lived up to his early promise for his current team.

We feel Baker and Odell are not winning playoff games anytime soon and until they prove us wrong we are not buying (in fact we think Baker will be benched at some point this year and will become a backup and may even be out of football in a few years).