The slick-fielding shortstop made a boom the following year when he hit 30 dingers and 98 RBIs, scored 122 runs, had over 200 hits, and became an instant superstar.

His emergence gave rise to the Garciaparra vs. Jeter debate, alienating Red Sox and Yankee fans beyond their already spiteful relationship.

Garciaparra is an absolute stud that you can feel safe investing in.

Nomar’s award-winning rookie season and career are ones to remember. Here are the top three cards for those looking to invest in Nomah (Boston accent). 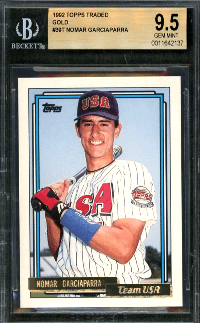 Nomar’s 1997 rookie season is arguably his most impressive. Therefore, a rookie card represents Nomar at his finest. This Nomar rookie card stands out from the rest.

It shows a lanky, teenaged-looking Garciaparra in a pinstriped Team USA jersey and blue “USA” hat. He flashes the Garciaparra grin while holding his bat over his right shoulder.

The image is the card’s centerpiece, surrounded by intertwining borders and a white backdrop.

It’s a simple prospect-rookie card that captures Nomar pre-stardom. You can get this one at a very reasonable price point. 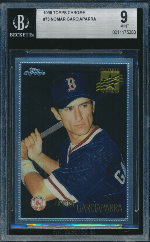 Nomar Garciaparra’s 1996 Topps Chrome Refractor is simple yet effective. And, considering the sting-bean-like appearance of the man on the card, it’s easy to see why Nomar was later accused of steroid use.

About the card: it features three primary elements. Those are:

The image of a focused, wristband-clad Nomar ready to be photographed makes up the rest of the card.

While it’s one of the more iconic Nomar cards, you can find it in mint condition for a relatively modest price. 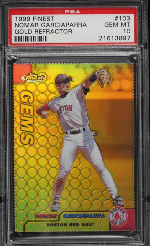 1999 was a year when Topps baseball cards were crawling back to relevance. With Junk Wax in its rearview, card manufacturers were once again making attractive cards like this one.

The card’s refractive backdrop includes a honeycomb design on the left side. The gold sheen makes this limited-print parallel stand out from the others.

Even with its eye-catching appearance, you can obtain this one for a modest sum. 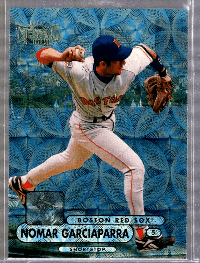 Garciaparra fell off of the Major League Baseball Hall of Fame ballot in just his second year of eligibility. That departure reinforced Nomar’s career as one of “what could have been”.

For all of his injuries and inconsistencies, Nomar’s cards retain decent value for a few reasons. Those reasons include:

He’s also got some pretty cool cards to his name.

Still, the combination of Junk Wax era rookie cards and unfulfilled potential stymies Nomar’s cards’ value a bit. Having no World Series rings or MVP trophies to his name also hurts. As does the certainty that he will never be in the Hall of Fame.

All things considered, Nomar’s cards are a middling investment. Not terrible, but with little room for upside.

Invest in the Top-Rated Rookie Cards Instead: