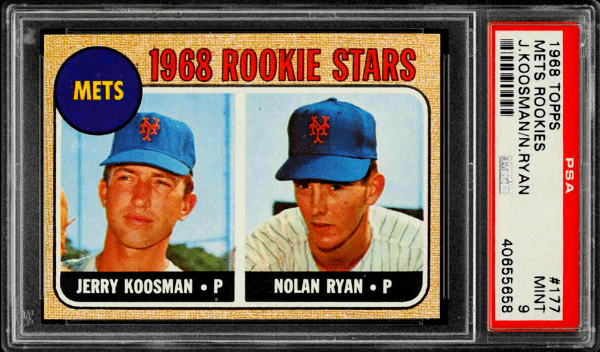 Besides racking up an astronomical amount of strikeouts in the big leagues he is also known for laying a licking to Robin Ventura on 8/4/1993 (more about this later).

During his stellar 27-year MLB career he struck out 5,714 batters which still ranks 1st for most career strikeouts all time.

There is one Nolan Ryan rookie card worth investing and it features another player on the card which isn’t a plus in our opinion. 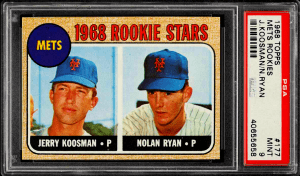 We are not a huge fan of “rookie cards” that have another player on the card (i.e. Larry Bird Rookie Card).

Some collectors don’t mind the fact that another lesser player is shown on the card but here at GoldCardAuctions, we don’t even bother purchasing one that has another player. This is just our opinion as we respect the other side of the argument.

The card is numbered #177 and shows a close-up of both Nolan Ryan and Jerry Koosman.

Since we don’t recommend investing in his rookie card here is a list of his best baseball cards that are not considered rookie cards. 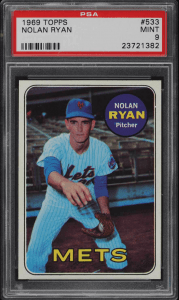 A baby-face Nolan Ryan practicing some pre-game fielding in this 1969 Ryan Topps card. For some reason the ball is already in his glove which only adds to the mystique/weirdness of the card. This is also his first mainstream baseball card to picture him on his own.

The card is numbered #533 and reads “Blessed with blazing speed, Nolan un-leased his fastball at Greeneville in ’66 with 17 wins and 272 strikeouts. He was named the circuit’s top pitcher“. 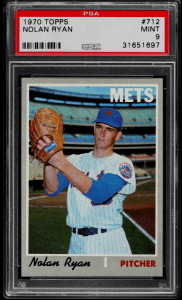 Another baby-face Nolan Topps baseball card that shows him in the beginning of his pitching windup. Nolan doesn’t look exactly happy in the picture which seems to be a theme in almost all of his cards.

Numbered #712, the reverse reads “With an amazing ratio of K’s per innings pitched, Nolan has an incredible total of 313 strikeouts in 205 innings, 1966. Led West Carolinas Loop in Wins & K’s and was voted MVP. Recorded key Saves in NL Championship Series and in the World Series, 1969.” 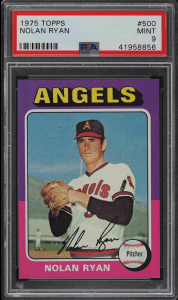 The 1975 Topps Nolan Ryan baseball card has an odd border-color consisting of blue and pink. Ryan has a slight bit more of an age to him but still looks rather youthful. 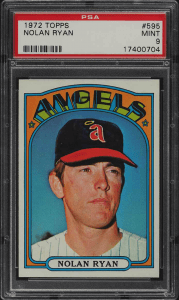 The 1972 Topps Ryan card displays another not-so-happy Nolan Ryan, one might even say pissed off. It seems as every Nolan Ryan baseball card printed in the 70s’ had him looking put off even though it was a great decade for him.

Maybe that is just how he liked to pose for photos back then with a tough-guy facade (after all he did beat the snout out of Robin Ventura later in his career… see video below). 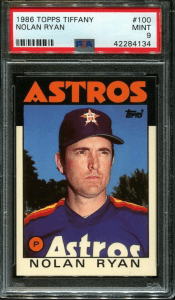 This is our favorite Nolan Ryan baseball card by far and again features his classic stern-ass stare. Imagine looking at that while trying to hit one of his 99 mph fastballs… good luck.

Numbered #100 the reverse simply shows “Complete Major League Pitching Record” which was not uncommon for Topps to do at the time.

If you are going to buy a Nolan Ryan baseball card this is a great pick in our opinion. 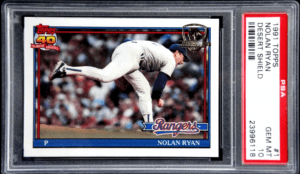 Created by Topps to give honor to the troops who served in Operation Desert Shield in the Middle East. The Desert Shield baseball cards are the exact same as the base 1991 Topps cards besides the foil logo in the top right-hand corner of the card.

The card is numbered #1 and shows Ryan firing a fastball down right down the pipe for what we assume was a major swing and miss. The back of the card simply states “Complete Major League Pitching Record”. 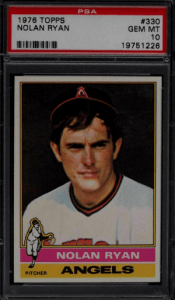 Be on the look-out for Nolan Ryan rookie card reprints as there are a number of them for sale on eBay at any given time.

Estimated Nolan Ryan baseball card value? If you would like us to provide an estimated value of your Nolan Ryan card please email us at value@goldcardauctions.com. Include a minimum of 2 photos and allow up to 72 hours for a response.

The legendary Nolan Ryan Topps rookie card can be found in packs of 1968 Topps baseball cards, which believe it or not can still be found for purchase on eBay. 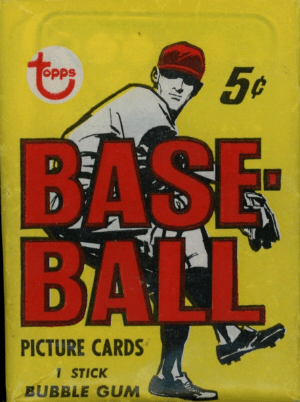 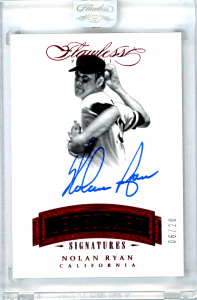 Even though we are not a huge fan of the 1968 Nolan Ryan rookie card does not mean it’s not a good investment as it does seem to have a good ROI over time.

If we were going to buy a few Nolan Ryan baseball cards we would spend our investment stash on the 1986 Topps Tiffany but the 1968 card is a good option for long-term investors as well.