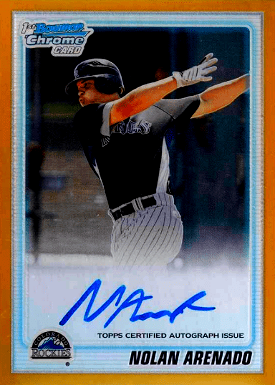 Nolan Arenado (4/16/1991) was drafted by the Colorado Rockies in the 2nd round of the 2009 MLB June Amateur Draft from El Toro HS (Lake Forest, CA) and was traded to the Cardinals for a sack of beans (literally a sack of beans).

Nolan Arenado Rookie Year Stats: .267 BA | 10 HR | 52 RBIs… not the best rookie numbers but not wrong either; those numbers did not tell the whole story, however.

Arenado has developed into the best 3rd baseman in the league (in terms of both offensive numbers and defense) and will most likely lead the St. Louis Cardinals to another NCLS Championship Series (good luck vs. the Dodgers, however).

Below are the best 3 Nolan Arenado rookie cards (specifically, the Bowman Chrome and Topps Update are the best for investment purposes).

A must for autograph hunters. The Nolan Arenado 2010 Bowman Chrome Auto card is numbered BCP91 and includes a resume, skills, and up-close profile.

Probably the best Nolan Arenado rookie card to invest in. The 2013 Topps Update Nolan Arenado RC shows him lacing a double down the line… stop looking and run!

His name is in the bottom left corner, and the Colorado Rockies logo is in the bottom right. Nolan is looking sexy as hell after jacking the ball and is ready to jog those bases on his way to home plate… BOOM!

The card is US259, and the back reads, “In just his second major league game on April 29, 2013 Nolan went 3 for 6 with a homer, three runs scored, and 2 RBI. That was the impact the Colorado Rockies were hoping for when they drafted him in the second round out of high school three years earlier. Arenado’s impressive climb included a 122 RBI season in 11 – tops among all farmhands“.

Pretty much the same as the above Topps Update card, just rarer and an excellent option for collectors who have a few more dollars to spend on a Nolan Arenado rookie card.

I am looking for the best sports cards to buy right now? Read the Gold Card Auctions Best Sports Cards write-up and thank us later.

Arenado is wearing the white, pinstriped Rockies jerseys, looking to the sky as he chases down a flyball while playing third base.

While the 2010 Bowman Draft version is more popular, this card offers an alternative some collectors may chase after.

Still, for those looking for a more limited product, they can attempt to go after some of the more limited parallels listed below. 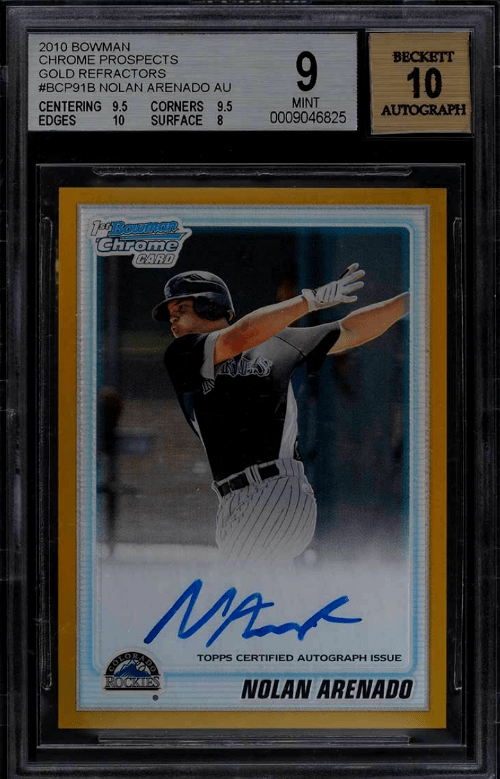 Popular: BSG vs PSA vs SGC

If you want to purchase a Nolan Arenado baseball card, please contact us at advice@goldcardauctions.com.

Are you looking for an estimated value on a Nolan Arenado RC? Email us at value@goldcardauctions.com.

Nolan Arenado was living the dream at Coors Field, but things will change, and he will now have to prove himself outside the Colorado hitting haven.

Don’t expect Arenado to put up the same numbers in Colorado but he will still be a massive offensive weapon and make Goldschmidt a TON better (and vice versa).

Buying a few Nolan Arenado rookie cards should be a wise move, as you know those St. Louis Cardinal fans (self-proclaimed best baseball fans) will be gobbling up his rookie cards by the hundreds this summer.