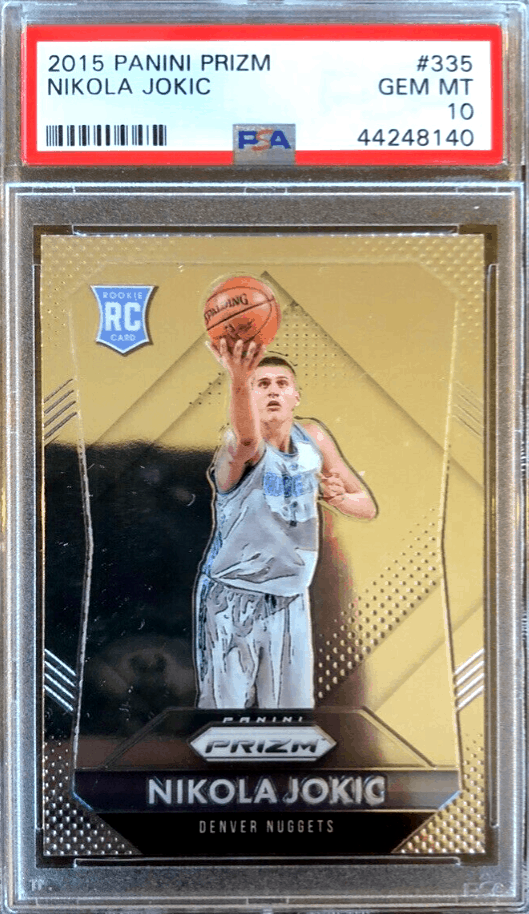 Nikola made an immediate impact in his rookie year as he averaged 10 points and 7 rebounds a game. He has since turned into a beast averaging 20 points a game to go along with 10 rebounds and almost 7 assists per game in 2020. 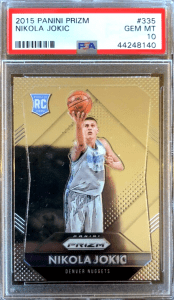 This is his go-to card for the average sports card investor. The Nikola Jokic Panini Prizm card is numbered #335 and is available in a variety of parallel. We have bought a dozen of these cards for short and long term investments.

The card should be available on eBay auctions at any given time and the parallel is listed below. 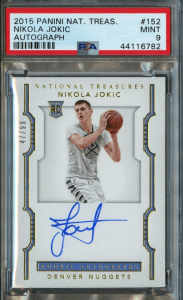 Here is the BIG BOY card for investors who have a large bankroll. This card will cost more than 4 digits and is a sick looking card.

Numbered #152 the card shows Nikola grabbing the rock after a rebound and looking for his go-to ball-handler to take the ball up the court.

We bought a couple of these and are saving them as a long term investment. 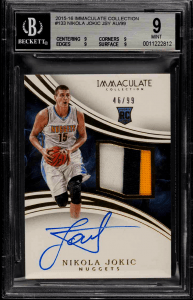 The Nikola Jokic Immaculate Collection RC is between the Prizm and National Treasure card value-wise.

The card is numbered #133 and shows Jokic passing the ball up the court. 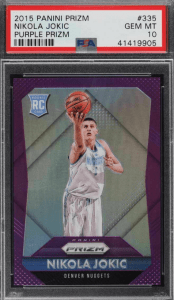 If you would like an estimated value of a Jokic rookie card please email us pictures to value@golcardauctions.com.

We like Nikola Jokic rookie cards for the next 5 years or so while he is in his prime. He is on a good team and will be a very valuable free agent that star NBA players (i.e. LeBron James) will want to recruit (eyes roll over to Luka Doncic… imagine Luka, Jokic, and Kristaps Porziņgis on the same team… BOOM GOES THE DYNAMITE).