Following a notable career in Swedish hockey leagues, Lidstrom made his NHL debut in 1991. Most experts consider Lidstrom the best NHL defenseman to lace up the skates, and we agree.

Lidstrom was a defensive stalwart of the juggernaut Red Wings teams of the late 90s and early 2000s.

Nicklas Lidstrom is one of the best defensemen in hockey history. As hockey cards continue to appreciate, consider these classic rookie cards for your collection. 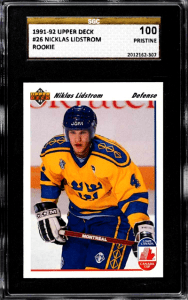 Not many consumers in the card hobby are even aware this card exist. The 1990 Niklas Lidstrom Upper Deck French rookie card is rare and not seen often on eBay auctions, particularly at high grades (i.e., PSA 10).

We feel the French Niklas Lidstrom Upper Deck RC has the most to gain in terms of ROI over the next few years due to the rarity at high grades. 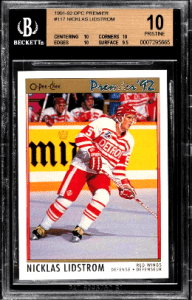 O-Pee-Chee is a name you’ll hear in any discussion of top NHL rookie cards. Since we’re talking about Nicklas Lidstrom’s rookie cards, it’s only fitting to start with the O-Pee-Chee Premier RC #117.

It’s arguably the most in-demand of all Lidstrom rookie cards. Still, since it is a product of trading cards’ junk wax era, you can get this card at a reasonable price.

As a scion of the junk wax era of trading card, its design isn’t exactly high art. It’s simply good enough. To O-Pee-Chee’s credit, it allows Lidstrom’s image to do most of the work.

Lidstrom does the defenseman’s lean in a vintage Red Wings uniform reminiscent of the U.S.S.R.’s Olympic getup. Those used to him in the later, more recognizable wheel-and-wings Detroit sweater will be reminded that this is one of Lidstrom’s earliest cards.

The design’s only components are a gold rectangular upper plate and black font on the lower border. These accents include Lidstrom’s name and position and the O-Pee-Chee Premier ’92 logo.

The inclusion of French text is a hallmark of O-Pee-Chee cards of this era.

This isn’t a card for those who are obsessive about design. It is a leading Nickolas Lidstrom rookie card, which is plenty to pique collectors’ interests. 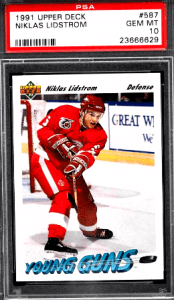 Lidstrom’s Young Guns rookie card was released one year after the set’s 1990 debut. The Young Guns set was immediately popular among collectors, and this card maintains strong value today.

It shows Lidstrom ejecting the puck from his zone. He completes a left-handed swipe with a look of exertion on his face. Unlike his O-Pee-Chee RCs, he sports the modern Red Wings uniform.

The card has a 90s vibe, with a block-lettered “Young Guns” banner and a cartoon hockey puck whizzing past. The white, borderless backdrop allows Lidstrom’s photo to shine.

This is one of the most bid-upon Lidstrom rookie cards. Even so, it’s not prohibitively expensive. 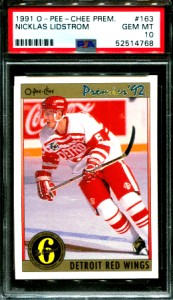 O-Pee-Chee is responsible for some of the most iconic NHL rookie cards. If you haven’t already, add this second Lidstrom O-Pee-Chee RC to your to-buy list.

The card’s front design is similar to the O-Pee-Chee Premier #117. However, this card contains no nameplate. Unless you recognize Lidstrom’s face or #5 sweater, you might not know whose card you are holding.

Another difference is an additional gold border on the bottom of the card. On that border is “Detroit Red Wings” in bold black font. A “The Original 6” emblem is another unique feature.

The image is also different from the other Lidstrom O-Pee-Chee RC. Though he wears the same uniform, this card features Lidstrom in a hunched pose, both hands on his stick while surveying the action.

Though slightly less popular than the Nick Lidstrom O-Pee-Chee RC #117, this card is well-regarded among collectors. 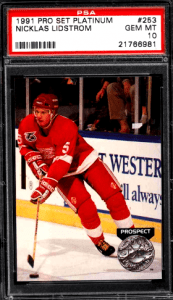 With his accolades and numerous Stanley Cup victories, Nicklas Lidstrom is about as proven as a hockey player and, as we mentioned, our top defenseman to ever play the game.

However, he suffers from poor timing when it comes to his rookie cards. Hockey legends who debuted during the junk wax era have mass-produced rookie cards that lack thoughtful design features.

While we think that Lidstrom’s rookie cards present substantial value, understand that their production volume puts a cap on their price ceiling. You can anticipate growth but temper your expectations.