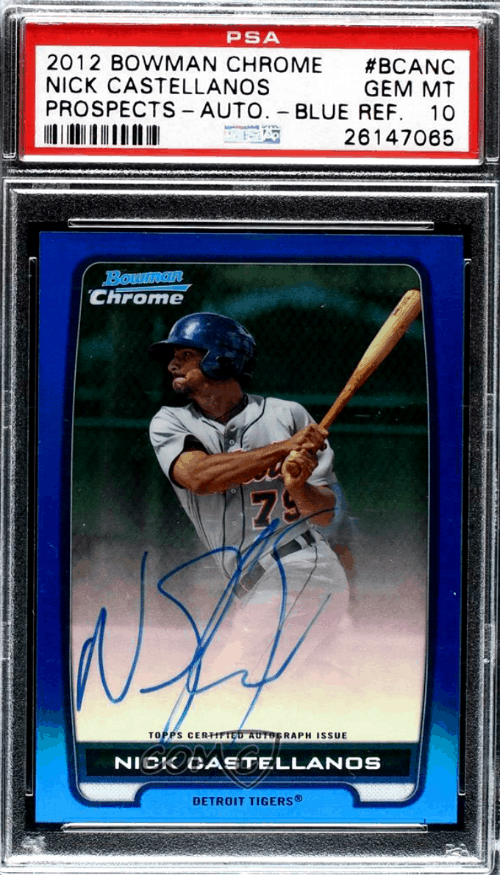 He had a decent career with the Detroit Tigers getting better and better every year (for the most part). During the 2019 season, he was traded to the Chicago Cubs and went on to bat .321 with 16 jacks and 36 RBIs in only 51 games.

Let’s check out the top Castellanos rookie cards for investment purposes and hope he continues to rake in 2021.

The 2012 Nick Castellanos Bowman Chrome Prospect rookie card is our top pick when it comes to his top-rated RCs and comes in a variety of high-end parallels.

The base card is numbered #BCP78 and shows him smacking a hit down the 1st baseline. His name is centered at the bottom while the Bowman Chrome logo is printed in the top left-hand corner. 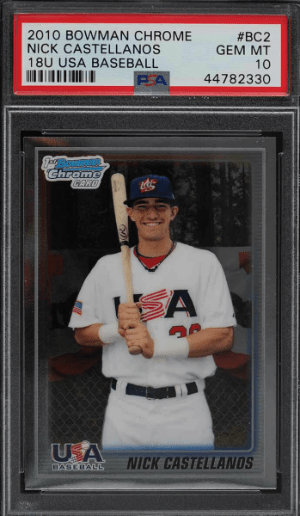 If we were picking our best-looking Castellanos rookie cards this would be it.

The card pictures Castellanos posing for the camera with a GIANT smile from ear to ear (almost like he knows he is going to make millions in baseball). 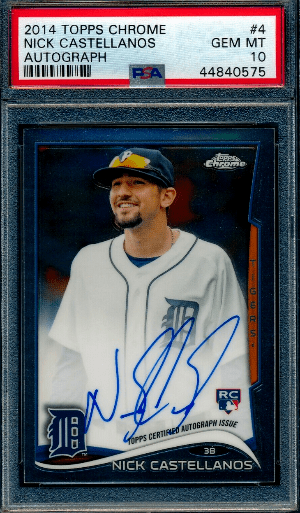 Going from the best Nick C. looking RC to the worse (or close to it).

The 2014 Topps Chrome Castellanos RC shows him with a goofy smile on his face while looking up into the stands with a ghost costume on.

At least that’s what it looks like as Topps for some reason blended his white jersey with more white towards the bottom of the card… odd. 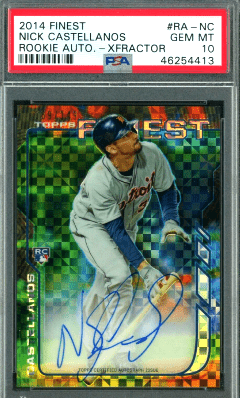 If you are thinking about buying a specific Nick Castellanos RC on eBay but are having second thoughts please email us at advice@goldcardauctions.com for help.

Have a few Nick C. rookie cards laying around and would like an estimated value? Email us a few photos of the card in question to value@goldcardauctions.com. 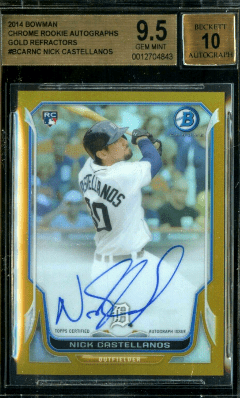 Many experts were calling for a big season from Castellanos in 2020 and so far they are looking right (playing in Cincinnati will pad most batters stats).

He had a pretty good 2019 batting .289 while clubbing 27 homers and 73 RBIs so a move to the Reds ballpark combined with him being in his prime years (age 28) equals a high likely hood of a career year for Mr. Castellanos.

Update: Castellanos is having a career year and is one of the top 10 players in baseball halfway through the 2021 MLB season.

Now, this doesn’t mean we should all rush out and buy up his rookie cards BUT they should see a decent ROI over the next 2 years based on where the prices are currently.