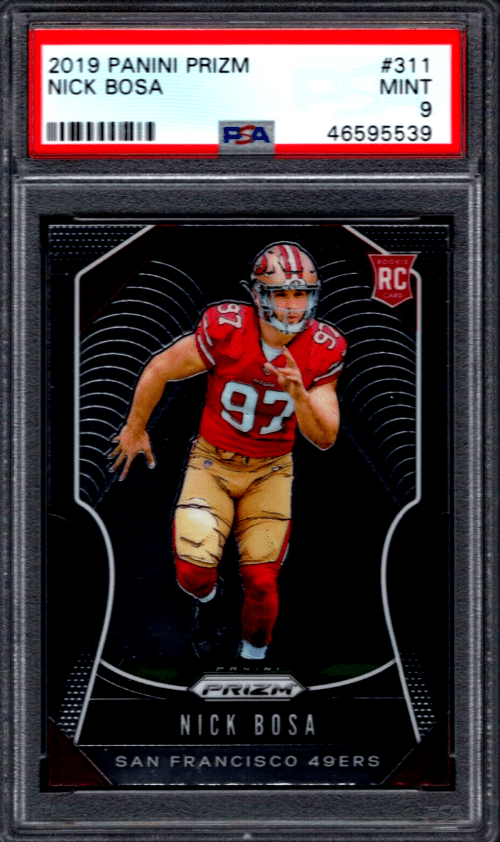 Nick Bosa is a boss and one of the best defensive NFL players in the league.

He was drafted second overall by the SF 49ers and emerged as one of the top talents as he helped the team to reach Super Bowl LIV.

People Are Reading:
Best Sports Cards To Invest In

Despite an inevitable 31–20 loss, Bosa earned plaudits throughout the season thanks to his defensive skills, while he recorded a strip-sack against Patrick Mahomes in the final.

He’s taken the quick path to the top of the NFL’s defensive leaderboards as he has firmly entrenched himself among the best pass rushers in the league. It won’t be long until Bosa wins his first NFL Defensive Player of the Year Award.

Here’s a rundown with some of the best Bosa rookie cards on the market and an investment outlook as he aims to repeat the feat this season.

We’ve looked at recent auction data to find three of the most popular Nick Bosa RCs to sell in the last six months. 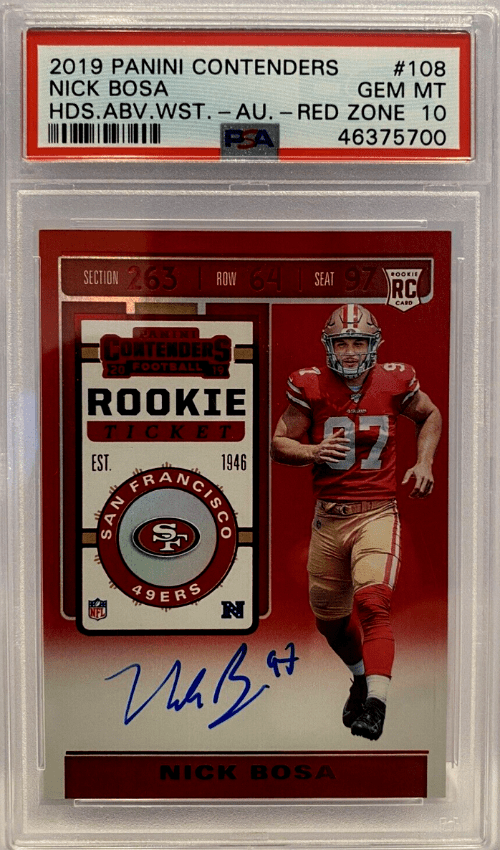 Panini Contenders cards are often favored by collectors thanks to the robust Rookie Ticket design and the proven prices of the past. Bosa’s release in the 2019 set is no different, featuring an image of the player in full gear alongside an on-card autograph.

A range of parallels cause additional interest, and the majority come with low print numbers. Values have started to pick up rapidly, and we’d opt for either the Cracked Ice parallel or the Clear parallel if they’re within your price range.

Bosa’s 2019 Panini Prizm is the second RC to make a list.

As always, the Prizm release comes with unique borders and a host of parallels, featuring a layered image of the player in action. There’s a red and white RC logo in the top left corner, along with a stickered auto (which is hidden well) found at the base of the card. 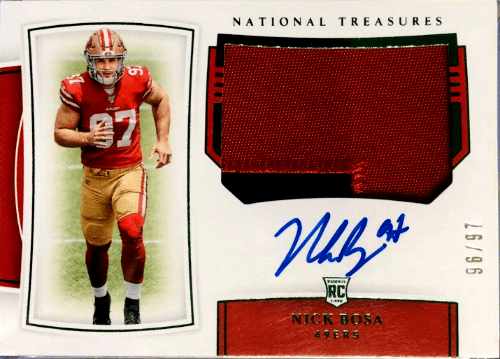 If you’re willing to pay a premium, there’s no better place to look than Bosa’s 2019 National Treasures Rookie Patch Autograph. Adding a small player image, the on-card auto, and a large patch can make the card slightly cluttered, but it’s still a great option in terms of potential investment pieces.

Much of the power stems from the NT brand, having one of the strongest autographs and a significant player patch. As always, a range of parallels increases in rarity and value, respectively.

Because he was such a high draft pick, there were plenty of different Nick Bosa rookie cards made by various card producers. While some of these cards are worthless, many should be of interest to investors as they can provide an excellent return on investment as Bosa progresses throughout his career.

Here is one that didn’t make our top three but is still a great option.

This card from the Panini Absolute set is another best among Bosa’s rookie cards. It shows the young defensive lineman in his 49ers uniform with a red jersey and gold pants.

While there is no autograph or jersey patch on this card, it’s still a solid option for those that don’t want to put up a large upfront investment. The left side of the card has an attractive design that mirrors the style of the laces of a football.

Nick Bosa rookie card values are undervalued based on his ceiling. We think he could be one of the best defensive players the NFL has ever seen (at minimum, one of the best of his generation, baring a catastrophic injury).

If you are on the brink of buying a Nick Bosa RC but want advice, please hit us up at advice@goldcardauctions.com with a link to the card you are thinking about buying.

If you’re looking for hyped RCs, look no further than Bosa’s range of 2019 options. Defensive players can sometimes be overlooked in favor of attackers, but there’s no chance of that happening with the 49ers star. He recorded 9.0 sacks, 18 quarterback hits, and 52 quarterback pressures in a strong rookie year.

The brother of defensive end Joey Bosa, his elder brother recently agreed to a five-year, $135 million extension with the Los Angeles Chargers, with $102 million guaranteed. He later told ESPN that he expects the younger Bosa to break the record soon.

Nick Bosa is equipped to take the league by storm, and he’ll be keen to prove that his rookie season wasn’t just some happy accident. There’s already talk of where he’ll move to next, and the future looks bright.

As with almost every hot prospect these days, Bosa has a range of RC cards that can be found in all of the important sets from 2019. However, there are good investment options in almost every price bracket, and they have attracted a lot of collectors’ interest.

The average price of Bosa’s cards has already started to increase, while another good showing in 2020 will see them solidify by the time he’s ready to sign a new contract.