Widely considered to be a top-three player in the world, (along with Cristiano Ronaldo and Lionel Messi) Neymar joined the French side from Barcelona for a world-record transfer fee of $263 million in 2017. Since then he’s dominated domestically, but PSG has continued to struggle in Europe.

We’ve produced a list with three of the top Neymar Jr. rookie card options, along with investment advice as he heads into his prime years in Paris.

Neymar began his career as a youngster in Brazil, and there is a range of rookie cards from the late noughties to keep an eye out for. There’s also a great release from the 2014 World Cup, as well as parallels and signed options.

Neymar’s Abril Gol is one of the earliest cards you’ll find with the Brazilian attached, and there are a couple of different versions in the 2009 set.

They’re both bright yellow, and the first card (#154) includes a posed headshot, while the second (#155) shows Neymar in action. They’re both worth a similar amount in terms of value, and they’re especially difficult to find in higher grades (i.e. PSA 10).

The reverse contains no player info. Instead, it has a simple green background, with the card number found in the middle. They’re now over a decade old, and you’ll struggle to find a Neymar RC that has a similar age unless you look at the unique option listed below.

Next up is a Panini release from 2010. Produced in Japan, World Club Champion Football (WCCF) is a card game/arcade game from Sega. It makes sense, as Neymar’s various technical abilities are listed at the bottom, rated from 0-20.

Of course, he scores highly in terms of offense, technique, and speed. He’s still the same a decade on, although he’s probably deserving of a rating higher than the 84 overall he’s given at the bottom.

There’s a large action shot of Neymar in a white Santos kit, back when he had one of the worst haircuts in the sport. It has a black border that is finished with a gold trim, which makes it another card which is hard to find in decent condition. The reverse is mainly filled in Japanese text.

If you’re more interested in the most expensive options available, Neymar’s 2014 Panini World Cup card is arguably the pick of the bunch. It has a great shot of the player in his Brazil kit, with a slick green border that matches the trim on his shirt.

There’s an extensive range of Prizm parallels that are serial numbered, while there are also inserts included in the set, along with a signed card (#S-NE) that is worth checking out if you’re on the lookout for the very best Neymar mech.

Must Read: Tom Brady Rookie Cards are a Top Investment

Neymar soccer cards, in general, should increase in value as soccer becomes more and more popular in the United States.

If you have a Neymar rookie card and would like an estimated value please email us at value@goldcardauctions.com.

If you are looking to buy a Neymar soccer card and would like advice please hit us up at advice@goldcardauctions.com 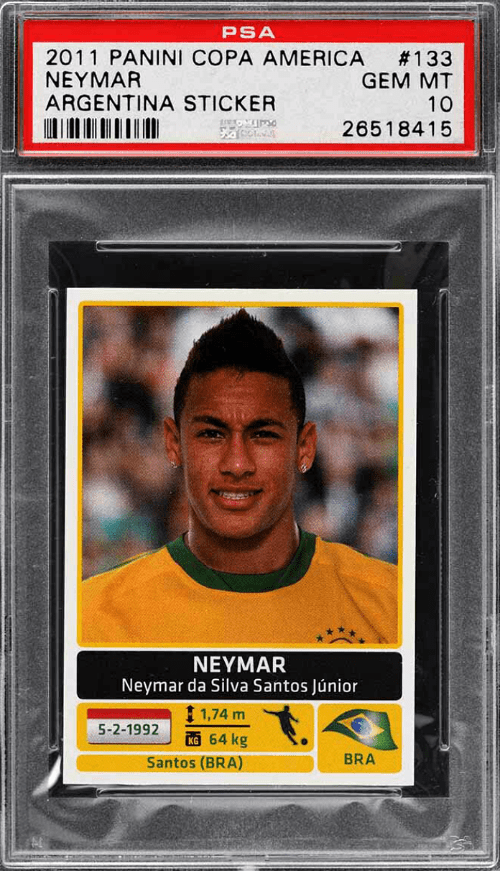 Neymar is at the top of his game, and he’s entering his prime years with PSG. Talent-wise, he’s definitely on the level of Messi and Ronaldo, even if he isn’t as popular as the other two.

Maybe it’s because he plays in an unfancied league in France, or that the Brazil captain has never looked likely to win a World Cup despite his undeniable talents. My personal opinion is that it’s because he just missed out on competing with the top two due to being slightly younger, and had to live in their shadow for years. Even now, they dominate in their 30’s, and they’ve made it impossible to compete for thanks to their inhuman numbers.

For example, Messi has won the Ballon d’Or award six times, while Cristiano Ronaldo has won the award five times. That’s since 2008. Aside from Luka Modric, no other player has received the top award in football during that time.

In other words, they’ve been dominating for so long that Neymar’s first RC hadn’t come out yet. At the age of 28, he doesn’t have long left and may need to wait for them to retire to carve out his own legacy.

The RCs are cheap considering that Neymar is already a living legend in Brazil and beyond, famed for his skill and trickery. An elusive win in either the Champions League or the World Cup would see prices rising, but it’s a big ask considering he’s beginning to run out of time.