The Colorado Avalanche drafted Nathan MacKinnon with the first overall pick in the 2013 NHL Draft. Born in September 1995, he was just 17 when he entered the league.

MacKinnon played in 82 games as a rookie, scoring 24 goals, dishing 39 assists, and posting a +20 rating. He made an immediate impact.

Nate the Great is known for his skate speed and crafty goal-scoring abilities. He’s an offensive force in a league chock-full of talented players.

As an established star, the prices for Nathan MacKinnon’s rookie cards continue to rise. These are the standouts.

With a print run of 149 and an on-card autograph, there’s no way we were going to leave the 2013 Nathan MacKinnon Upper Deck Trilogy Auto #201 off of this list.

Even if it lacked these valuable features, it’d be a nice-looking card.

It shows MacKinnon in one of the best sweaters in the league, Colorado’s maroon-and-blue jerseys. Mack Daddy leans slightly forward with his eyes fixed in front of him.

The card’s backdrop is a color gradient going from blue at the top to white at the bottom. Triangle features jut into the card from both the right and left sides.

A blue tornado of an autograph sits in between a small, black nameplate on the bottom border and a “Rookie Level 1 Premieres” graphic above.

The print run indicator is embossed vertically on the card’s lefthand border. If you’re scoping a Nate Mac rookie card, you can do far worse than this.

Mack rocks a white and maroon Avalanche jersey, and the camera’s positioning showcases the indelible Avalance “A” logo.

The sensational rookie highlights his balance in the photograph, with both skates positioned in a slalom style as he holds his stick in his left hand. It’s this balance that places him among hockey’s elite talents.

The key here is the print run. A cool, old-style graphic on the card’s right-side border indicates this limited print of 29 copies. This does wonder for the card’s price point.

Does this have the most limited print run among Nate Mac rookie cards? Nah. Is it still valued highly among collectors? Yes, it is.

The 2013 Nathan MacKinnon SP Authentic Auto RC #312 has a couple of major benefits: a widely-respected manufacturer and an on-card autograph. The print run does help, too.

The card shows a belly-up image of MacKinnon in the team’s maroon and blue “Colorado” sweater. He wears a look of extreme focus underneath his black CCM helmet and visor.

The card is split diagonally, with the lower-right portion reserved for a white nameplate and blue autograph.

MacKinnon’s (bright) future is now. This card has proven to be both prescient and valuable.

Upper Deck apparently liked the cut of the Avalanche blue-and-marron jerseys, as MacKinnon sports those threads in most of his Upper Deck rookie cards…including this one.

The image of MacKinnon in his Avalanche threads pops thanks to the black backdrop. He skates forward with eyes trained down and stick held at waist height.

The darkened backdrop includes a side banner that reads “Rookie Gems”. Mackinnon’s nameplate sits low, alongside the Black Diamond emblem in the right corner.

You’ll need good eyesight to make out every feature of this rookie card. The potential profits from this investment are a bit easier to see.

An autograph on a rookie card is always a strong recipe. You’ve got a real winner when you throw a certified NHL player patch in the mix.

The 2013 Nathan MacKinnon SPx 151 Foil #209 has both the auto and the jersey (plus a limited print run of 249), which makes it a crown jewel in the MacKinnon pantheon.

The card design is horizontal, with MacKinnon’s torso-up photograph in the center. He wears (you guessed it) the blue-maroon Avalanche uni, holding his stick parallel to the ice.

A two-paneled player patch occupies the card’s right panel, with a “Rookie” graphic wedged between the patches.

A whispy blue autograph is penned beneath MacKinnon’s image. The left side of the card includes the (/249) print run indicator and a silver Upper Deck logo. The backdrop is a combination of white and blue-grey graphics.

Prizms are among Panini’s stable of uber-reliable sets. They are among the best sports cards to invest in today, and you’d be wise to get your hands on the 2013 Nathan MacKinnon Panini Auto Prizm RC #332.

The card has Prizm’s trademark embossed, refractive silver background. In a rare twist, Mackinnon wears the white and maroon Avalanche jersey stick down on the ice potentially in receipt of a pass.

You’ve also got the “RC” and Prizm emblems that are familiar to fans of Panini Prizms. It’s simple but effective—the proven Prizm formula.

Though it’s not the most stunning National Treasure you’ll see, the massive patch is a unique touch that is the card’s focal point.

The card’s bottom portion is very busy, with a blue autograph cozily stenciled above a nameplate, a “Panini National Treasures” emblem, Avalanche logo, and a couple of ornamental graphics.

MacKinnon’s image looms large atop the patch. He stares with his mouth agape beneath a white helmet with curly lettuce flowing out the back.

You can always expect to pay premium prices for Panini’s National Treasures. Get your money up if you want this one.

Select produced the first autographed Nathan MacKinnon RC, and its first-mover status has made the card quite valuable.

The card reflects Panini’s dedication to high design. A reflective gold and black backdrop border a high-definition image of MacKinnon in his Avalanche jersey.

The gold border extends to the card’s lower portion, which dovetails into a black nameplate. Above the nameplate is a “Select” graphic.

An autographed sticker sits between the “Select” graphic and the image of MacKinnon. It’s a high-quality MacKinnon rookie card with an autograph. Need we say more?

Coming in as the top Nathan MacKinnon card, we have the Upper Deck The Cup Patch Auto RC #187. Auto, patch, 99-card print run, and an ultra-respected subset of the Upper Deck brand? Yep, that’s a top card.

It shows MacKinnon focused on the puck in his blue-and-maroon “Colorado” Avalanche jersey. The card has a marbled, portrait-style border that gives it a regal feel.

The player patch in a shield shape is the central focus. A silver Avalanche logo and The Cup emblem envelop the patch.

A wieldy autograph is scribbled atop a white backdrop that reads “Rookie Auto Patch”. It all comes together quite nicely, and this card is a gem. 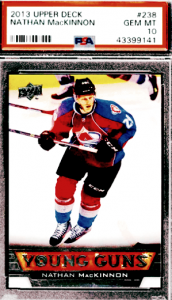 Ahh, the Young Guns. A must-have for any collector seeking top-shelf rookie cards.

This card shows Nate the Great in his blue-maroon Avs sweater, a full-body shot with black CCM pants and pad-stuffed, team-colored leggings.

A teammate skating in the background suggests an impending offensive attack.

Young Guns is known for keeping it simple, and this one contains only a nameplate, the Upper Deck logo, and the image of MacKinnon. The orange-and-silver “Young Guns” banner on the lower border is what catches the eye.

Investors can bank on Young Guns’ popularity, making this a valuable (if unexciting) rookie card.

As a former top pick who has proven ability to make the NHL’s All-Star team, Nathan MacKinnon is an emerging talent. That makes him an emerging asset to card collectors.

His primo rookie cards are already fetching prices beyond the range of the casual collector, and further accolades and success will push those prices even higher.

MacKinnon should be considered among the brightest young hockey stars in collecting circles. If prices are any indication, he already is.