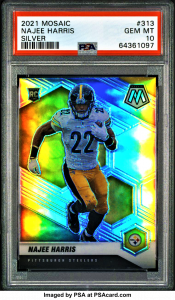 Najee Harris is a young running back for the Pittsburgh Steelers in the NFL.

He played his first NFL season in 2021, appearing in all 17 regular-season games for the Steelers, and their one playoff game.

He received for another 467 yards and 3 touchdowns. However, at the age of 24, Harris is an older player to have only completed one season. The reason for that is he spent four years in college at the University of Alabama.

He had an incredibly successful college career, winning a national championship in his freshman and senior seasons. Additionally, Harris was a unanimous All-American in his senior year.

Najee Harris finished his college career as the all-time leader in rushing yards, total scrimmage yards, and touchdowns for the University of Alabama.

His impressive college career led to significant draft hype in 2021. Harris went on to be selected 24th overall by the Pittsburgh Steelers.

He was the first running back selected, and he signed his rookie contract on May 25th, 2021 for $13.1 over four years.

Harris’s first season saw him break into the NFL in a big way. He finished fourth in the league in rushing yards and all-purpose yards.

Additionally, he led all running backs in receptions. He also led the league in touches and head zero fumbles. As a result, Harris was selected as a pro bowl alternate as a rookie.

Harris is off to an impressive start to his career, and as a result, his rookie cards are an exciting commodity.

These days, every player that comes into the NFL has several rookie cards from many trading card companies.

As a result, it can be difficult to gauge which rookie cards hold the most value.

It can be even more difficult to figure that out when the player is still very young.

Fortunately, we are going to do our best to help you out by looking at three of the best Najee Harris rookie cards.

We will look at various aspects of the cards as well as their overall investment value.

Here we are going to look at the three best Najee Harris rookie cards to see if they are good options for investors.

The first card we are going to look at today is from Mosaic, and it is part of the Prizm collection.

This card is one of the most valuable options because of its fluorescent design.

There are several versions of this card with differently colored Prizm backgrounds, with Harris in the forefront.

Harris is seen in his white Steelers jersey and yellow pants as he rushes the ball towards the endzone.

The top of the card features the RC and Mosaic logos. You can then see the Steelers logo and Harris’s name at the bottom of the card.

On the back, you can read a short blurb about Harris’s college career.

Prizm cards are always solid investment options when it comes to rookie cards, and this one is no different. 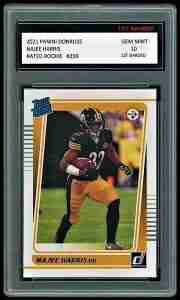 The next card we are going to look at is also from a Panini collection, but this time it is the Panini Donruss collection.

This card can be found in pristine, PSA 10 condition on most sites like eBay as they are still fairly new releases.

The card itself has a yellow border surrounded by a larger white border.

You can see Harris in the center of the card as he carries the ball upfield.

In the picture, Najee Harris is wearing a black Steelers jersey and yellow pants.

Like the previous Panini card, this card holds solid value, especially when you get it in good condition.

However, since it is so new, you can still purchase it for relatively cheap. 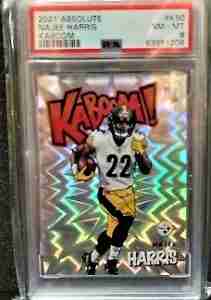 The final card we want to look at is one from the Kaboom collection.

This card features Harris in a non-photographed image carrying the ball.

He is wearing his white Steelers jersey and yellow pants.

The thing that really makes this card stand out is it has the big Kaboom logo in the background.

Having this logo gives the card added flare that really makes it stand out in a collection.

If you find this card in PSA 8 condition or better, it is one of the most expensive Najee Harris rookie cards.

We have touched on this a little bit, but these cards have the potential to be very valuable in the future.

However, there are some cards from more prestigious collections, like Prizm, that are already priced at several hundred dollars.

If you have a Najee Harris rookie card, we can provide you with its estimated value.

Email us or leave a comment below. Please include at least two photos of the card in your comment or email.

The best time to purchase a rookie card is when the player is a rookie.

By doing so, you can get the cards at their cheapest, and as a result, you have a chance to turn a massive profit.

A year has passed since these cards have been released, but most of them can be had for a reasonable price.

Najee Harris has already made a Pro Bowl, and as a result, we expect him to continue his upward career trajectory.

While the Steelers might go through some growing pains in the next few years, we expect Harris to be a bright spot.

As a result, we think he is a good rookie card investment option going forward.

How Much is a Najee Harris Rookie Card Worth?

Most Najee Harris rookie cards are still relatively cheap in 2022. You can purchase most cards for a double digit price.

When Was Najee Harris a Rookie?

Harris was drafted in the first round of the 2021 NFL Draft. He debuted that season, appearing in all 17 games for the Steelers, and their single playoff game.

Which Najee Harris Rookie Card Should You Purchase?

Each of the three options listed above are solid investment options. However, the Mosaic card has the greatest chance to increase in price over time.