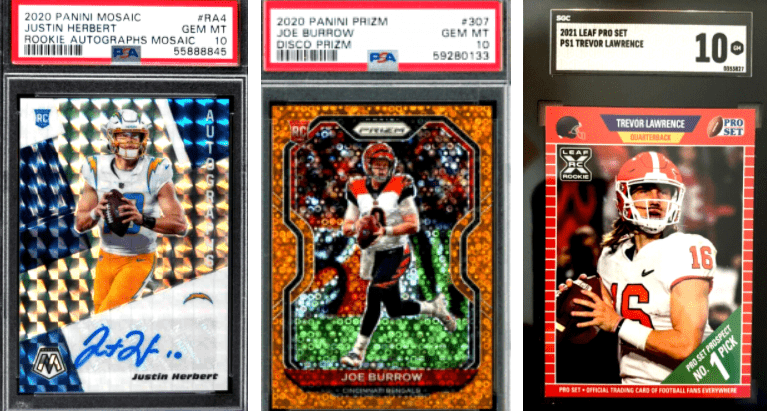 Seen as the next great generation of QBs rookie cards (see best QB rookie cards of all-time) to purchase, it’s difficult to find a trio of players that are more hyped right now when looking towards the next decade.

It makes sense as their respective collegiate achievements are numerous, while each has a skillset that is likely to serve them well in the NFL.

They could also potentially be some of the greatest football rookie card investments right now, so here’s the lowdown on three of the hottest talents that should be on your radar.

The Next Great Generation of NFL QBs: In Profile

We’ve prepared a rundown with information about each of the NFL QBs, including their skills and possible flaws to consider.

Skills: Herbert was named the NFL AP Offensive Rookie of the Year in 2020, winning the award by a 41-9 margin, with Minnesota Vikings wide receiver Justin Jefferson taking a distant second.

It’s not a bad result for a player who only started in Week 2 as veteran Tyrod Taylor was declared out at the last minute with a chest injury.

Herbert went on to break multiple rookie records in 2020, including Baker Mayfield’s previous mark of 27 passing scores by throwing 31 touchdown passes in his first season.

The QB finished with the most passing yards per game for a rookie signal-caller in history with 289.1, and also posted the fourth-highest rookie passer rating in the league’s history at 98.3.

Flaws: Many of his alleged flaws turned out to be magnified and exaggerated, with everything from ‘personality issues’ to questions surrounding his footwork and accuracy before he was drafted.

It’s insane to think he thrived so well against the backdrop of a season blighted by the pandemic, including a lack of normal practice time and in-person instruction.

Herbert has proved the majority of his doubters wrong so far, but he still has a long way to go before he earns a spot in the Hall of Fame.

Aspects such as decision-making and instincts should improve over time, while it’s hard to look smooth with such a large frame. They’re all considerable weaknesses to watch for.

Skills: Few players seem to respond as well to adversity as Joe Burrow, which is definitely a good thing after a difficult year for the young star.

It’s easy to forget that Burrow was the early favorite to be named Offensive Rookie of the Year before he tore his ACL on Nov. 22, ruling him out for the rest of the campaign.

The QB threw for 2,688 yards, 13 touchdowns, and five interceptions in 10 games last season until he was struck down.

He has worked to be ready for Week 1 of the 2021 season, giving us another chance to see exactly what he has to offer.

This was confirmed by Dr. Neal ElAttrache of Kerlan-Jobe in Los Angeles. “He’s on track for full go for the start of the season, he’s doing all the work. He’s worked his tail off and been an amazingly mature participant in his recovery. He’s focused and great to work with.”

Flaws: It’s tough for any player to come back from an injury of that magnitude, and after undergoing knee reconstruction surgery in December, we’ll have to wait and see if he can still live up to his early promise with no limitations.

Thought to be lacking in arm strength, it’s a reasonably large flaw for a position where throwing is exceptionally important.

Burrow will have all eyes on him, but don’t be surprised if he takes the opportunity to prove everyone wrong again.

Skills: The top-rated prospect for 2021 has to be Trevor Lawrence. His throwing range is pinpoint accurate, while he completed 69 percent of his passes in 2020 for 3,153 yards, 24 touchdowns passing, and five interceptions.

His record of 86 wins and four defeats across seven years in high school and college is insane, as he led the Purple Hurricanes to a 41-game winning streak over three seasons, winning two state championships in the process.

He’s arguably one of the best high school quarterback prospects of all time, continuing the hype through college to become the first pick in the 2021 draft.

Now comes the biggest test, as he begins his NFL career with the Jacksonville Jaguars.

Flaws: Think of Herbert and Barrow. Each had a significantly different season, and one that was tough to predict at this stage last year.

It’s hard to find many flaws with a five-star recruit, but will Lawrence be able to up his game when surrounded by the best in the world? We know the least about him, which makes him a high-risk high-reward option.

The Next Great Generation of NFL QBs: Best Rookie Cards

At this moment in time, almost any and every RC featuring one of the three players is worth a lot.

However, the price is due to their perceived future value, which is likely to skyrocket if they compete with each other over the next decade.

We’ve identified the best rookie card for each quarterback, giving you a great chance to get in before they become truly unattainable. 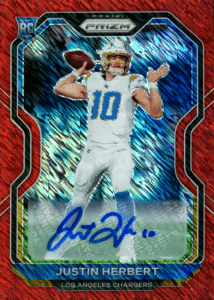 Herbert’s 2020 Panini Prizm comes with a dizzying array of parallels, including image variations and signed editions that differ in rarity.

The RC features a simple image of Burrow in his Bengals uniform, clutching a football in both hands as he scans the field searching for the perfect pass. 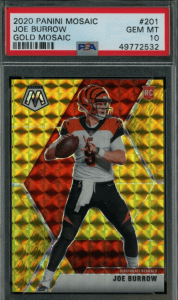 We were tempted to select the 2020 Prizm set again, but Mosaic Football is a new underrated option that we really hope Panini sticks to within 2021.

It features a simple action shot of Herbert as he clutches a football, with the background color dependent on your parallel of choice.

There’s a ton to choose from, but the majority are numbered to 99 or less.

The lack of an auto might be off-putting for some collectors, but we think this card has great potential as an investment piece. 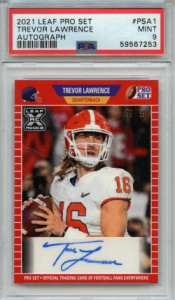 These low-numbered 2021 Pro Set autographs were sold through the Leaf website, and the first-round draft pick was the original player chosen to kickstart the collection.

Originally retailing for $750 each, copies are already selling for double as I type this sentence.

With only 99 copies and no parallels, it’s another rare option that may have flown under the radar for many collectors.

The Next Great Generation of NFL QB Rookie Card: Summary

You can never tell with QBs, especially if they’re first-round draft picks/former Rookie of the Year winners.

It’s the most important position in the sport, and they’re not just the leader of the team; the player often determines how successful a team is offensive as everything tends to go through a quarterback.

Each of the trios will have opportunities to impress in 2021, and they look to be a notch above the average group of hopeful rookies and freak athletes.

We’ve mentioned that their RCs can be seen as a volatile investment option compared to the likes of a retired legend, but there’s great potential for profit if you share in our belief that Herbert, Burrow, and Lawrence have what it takes to lock down the league in the near future.

Tom Brady and Drew Brees are still going, but they’re going to have to retire sooner rather than later. The former is currently the oldest active player in the NFL and is one of the oldest quarterbacks ever, and the next generation of great QBs are waiting in the wings.