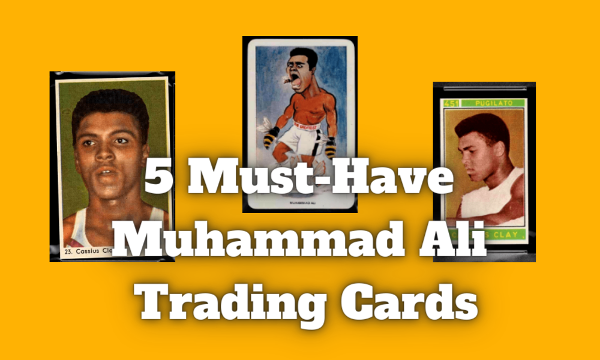 Born and raised in Louisville, Kentucky, Ali was known for his fun-loving, no holding back, “tell it how it is” personality (very Charles Barkley-like).

He had one of the best right crosses in the history of the sport to accompany superior head movement, a nasty dancing jab, and let’s not forget the legendary rope-a-dope strategy (a technique he used to defeat the heavy-hitting George Foreman).

We feel boxing cards are currently just as underrated as golf cards (Read: The Best Tiger Wood Rookie Cards) and should have a great ROI over the next few years. The emails have also been filled with a few requests for an Ali card write-up…

So, without further ado, let’s look at the best Muhammad Ali cards for investment purposes! 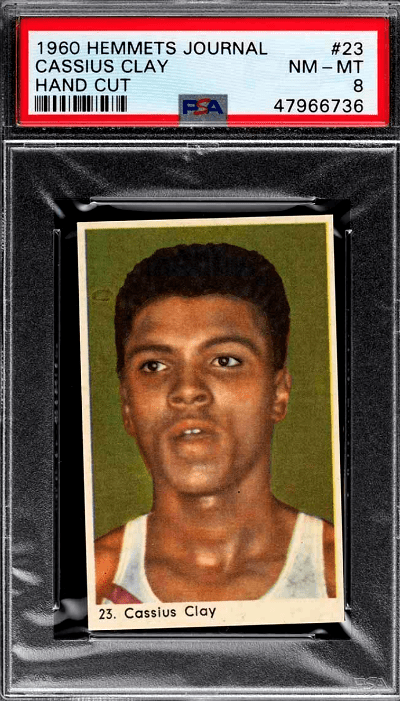 The 1960 Cassius Clay/Muhammad Ali Hemmets Journal #23 card is simple yet gorgeous and is on our list of must-have cards.

Numbered #23 the card shows a young Clay with a somewhat befuddled look on his face while the top of his white tank just makes an appearance. His name is placed in the bottom left corner and a simple white border frames the card. 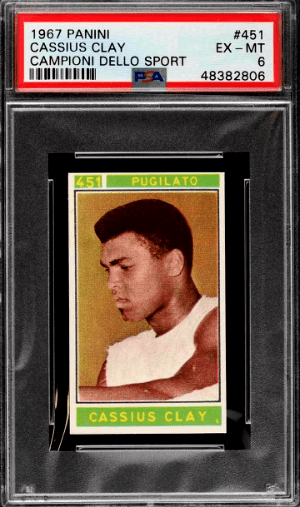 The 1967 Muhammad Ali/Cassius Clay Panini Campioni Dello Sport card is another Ali card that falls in the simple yet gorgeous category (and some sellers mark it as a rookie card).

Numbered #451, the card appears to show Clay getting his hands wrapped before a match or sparing session. His name is centered at the bottom, while the card number and the word “Pugilato” appear at the top. 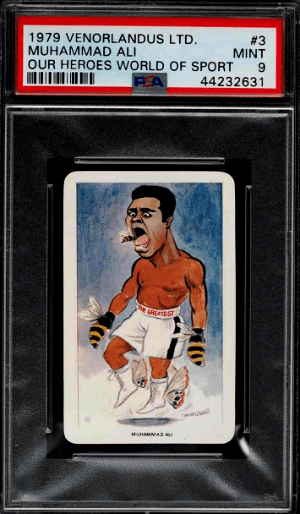 We adore the fun nature of the 1979 Muhammad Ali Venorlandus Our Heroes World Of Sports Boxing Card. Numbered #3, the card is a cartoon image of Ali wearing bumble bees for gloves! This is one of our favorite cards printed in the hobby, and the price for high grades isn’t astronomical. 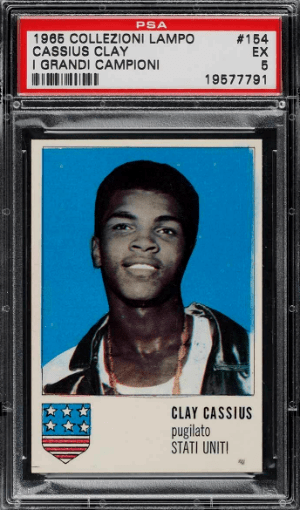 The Cassius Clay “Collezioni Lampo I Grandi Campioni” boxing card translates to “Lampo Collections The Great Champions”. Numbered #154, the card shows Ai/Clay grinning happily with a pretty blue backdrop. His name is displayed in the bottom right corner, while the United States Flag is depicted in the bottom left. 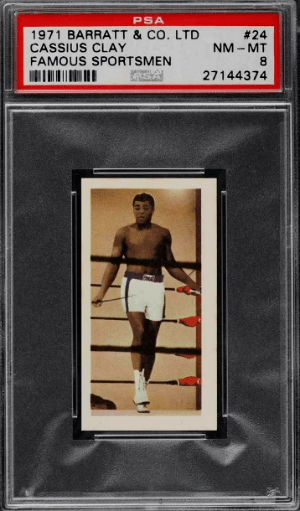 The last card on our list of best Muhammad Ali Cards is the 1971 Barrat & Co. card. This is another understated card that should appeal to both old and new money collectors who appreciate the classics.

Numbered #24, the card is sketching and is the only one of the bunch (on our list) to show Ali in the ring. The card does not feature any print on the front and is outlined by a simple white border. 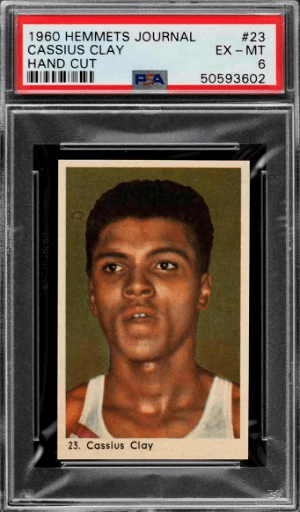 Please note the 1960 Hemmets Journal is the traditional Cassius Clay/Muhammad Ali rookie card and will get the most Benjamins at auction. 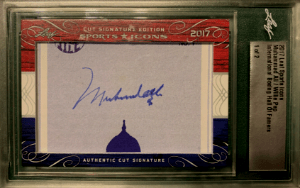 There are no Muhammad Ali auto cards, so to speak, or at least how we know autograph cards today (i.e., card companies obtain the auto). Only you will find an autographed Muhammad Ali boxing card if he signed the card in person. 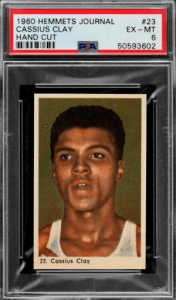 If you would like an estimated value of a Muhammad Ali card, please post in the comments below, email us at value@goldcardauctions, or DM us on the Gold Card Auctions Facebook Page.

Cassius Clay/Muhammad Ali had a certain quality that made him beloved by almost everyone (including people who didn’t like him). He is also one of the most requested sports figures we receive emails about writing up an article.

We feel Cassius Clay/Muhammad Ali boxing cards are just starting their climb to greatness. Look at the price of a PSA 10 1960 Hemmets Journal #23 card compared to a Michael Jordan Fleer RC… not even close in value when both are equal in terms of their craft and status as pop culture icons!

In all honesty, Muhammad Ali boxing cards might be the best return on investment of all cards presently. The prices for his cards are simply bewilderingly low for such a legend that can hold his own to the likes of Babe Ruth and Michael Jordan.